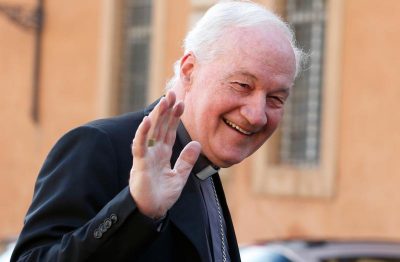 Cardinal Marc Ouellet, prefect of the Congregation for Bishops, arrives for a session of the Synod of Bishops on young people, the faith and vocational discernment at the Vatican Oct. 8. (CNS photo/Paul Haring)

VATICAN CITY (CNS) — Pope Francis, Cardinal Marc Ouellet and an official Vatican statement seem to be laying the groundwork for an admission that mistakes were made in handling allegations that Archbishop Theodore E. McCarrick engaged in sexual misconduct and even abuse.

But they also make clear that his ordination as a bishop (of Metuchen, New Jersey), appointment as archbishop — first of Newark, New Jersey, and then Washington — and his induction into the College of Cardinals all took place during the pontificate of St. John Paul II.

The first formal sanctions on Archbishop McCarrick were imposed by Pope Francis in June after an investigation found credible allegations of the sexual abuse of minors.

Cardinal Ouellet, prefect of the Congregation for Bishops, stated unequivocally Oct. 7 that now-retired Pope Benedict XVI never imposed sanctions on then-Cardinal McCarrick, so it is untrue that Pope Francis “invalidated” them, as Archbishop Carlo Maria Vigano, the former nuncio to the United States, claimed.

“The congregation’s decision was inspired by prudence, and the letters from my predecessor and my own letters urged him, first through the apostolic nuncio, (Archbishop) Pietro Sambi, and then through you (Archbishop Vigano), to lead a life of prayer and penance for his own good and for the good of the church,” Cardinal Ouellet wrote in an open letter to Archbishop Vigano.

Like many people in the church, Cardinal Ouellet asked: “How is it possible that this man of the church, whose incoherence has now been revealed, was promoted many times, and was nominated to such a high position as archbishop of Washington and cardinal?”

The answer, he said, is that “there were failures in the selection procedures implemented in his case” and “the concerns that were raised by witnesses should have been examined more closely.”

The Vatican press office Oct. 6 published a statement saying Pope Francis has decided that as the Congregation for the Doctrine of the Faith continues its investigations into the sex abuse allegations against Cardinal McCarrick, “a further thorough study of the entire documentation present in the archives of the dicasteries and offices of the Holy See regarding the former Cardinal McCarrick” will take place.

The goal of the study, the statement said, is “to ascertain all the relevant facts, to place them in their historical context and to evaluate them objectively.”

The mention of the “historical context” is important.

The Vatican itself explained Oct. 6: “The Holy See is conscious that, from the examination of the facts and of the circumstances, it may emerge that choices were taken that would not be consonant with a contemporary approach to such issues. However, as Pope Francis has said: ‘We will follow the path of truth wherever it may lead’ (Philadelphia, Sept. 27, 2015).

“Both abuse and its cover-up can no longer be tolerated, and a different treatment for bishops who have committed or covered up abuse, in fact, represents a form of clericalism that is no longer acceptable,” the statement continued.

Obviously, many Catholics are outraged that church leaders who seem to have ready answers for how laypeople should live and behave have been so slow to figure out a way to stop sexual abuse by clergy and to hold bishops and cardinals accountable for their personal behavior and for the cover-up.

Pope Francis, while refusing to respond directly to Archbishop Vigano’s accusations, told reporters in late September that he understands Catholics, including young Catholics, are scandalized by the reports of abuse and cover-up.

However, he also said the church is still learning and progress has been made, but it is not right to judge the past based on what is known and considered today the best way to proceed.

Referring explicitly to the Pennsylvania grand jury report on abuse released in mid-August, the pope said the cases were numerous “until the early 1970s,” but “in more recent times, they decreased because the church realized that she had to grapple with this in another way. In times past, these things were covered up,” both in the church and within families.

Pope Francis told reporters flying back to Rome with him from Estonia that “a historical fact should be interpreted with the hermeneutic of the time in which this fact occurred, not with today’s hermeneutic.”

Popular sensitivities and church teaching have developed over the centuries, he said, pointing to colonization and the awareness of the rights of indigenous people or attitudes toward capital punishment. “Even the Vatican, as a state — when it was a pontifical state — had the death penalty; the last one, a criminal, a young man, was beheaded around 1870. But then moral consciousness grew; the moral conscience grew.”

NEXT: Migration should be a choice, not forced, says cardinal