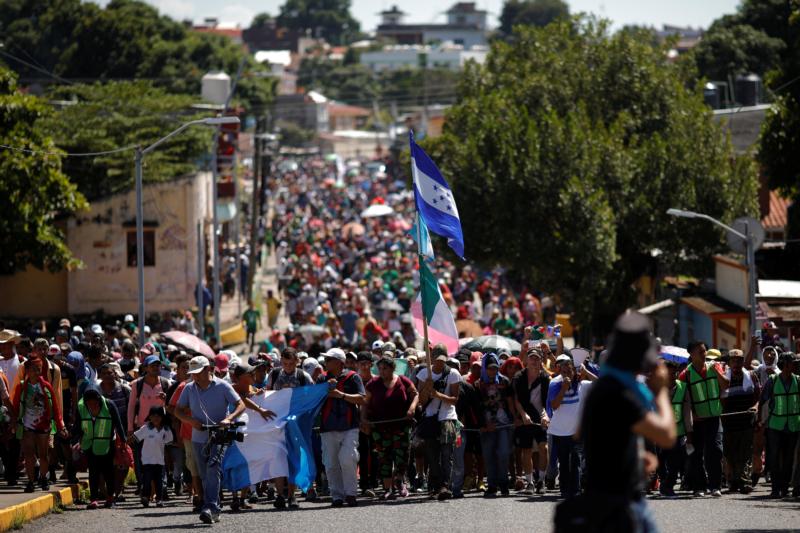 A large caravan of migrants from Central America, trying to reach the U.S., walks along a road Oct. 21 in Tapachula, Mexico. (CNS photo/Ueslei Marclino, Reuters)

VATICAN CITY (CNS) — Countries do not develop by themselves; they are built by migrants, Pope Francis said.

And migrants often choose to travel to a new land in a group, like those currently traveling through Central America and heading to the border between the U.S. and Mexico, he added, in off-the-cuff remarks Oct. 29 to a group of Scalabrinian Missionaries.

The missionaries, who were in Rome for their general chapter meeting, minister to migrants, refugees and displaced persons.

The pope thanked them for the work they do, noting the biblical mandate for “welcoming the stranger” and the importance of knowing how to do that act of charity well.

“It is true that today there is a surge in being closed to the stranger and there are also many situations of trafficking of foreign people; the foreigner is exploited,” he said.

The pope said, in his experience, his home country of Argentina “is a cocktail of waves of migration.”

Recalling how many migrants were well received where his father worked after the Second World War, “Argentina has experience in welcoming because there was work and there was also a need.”

“Because migrants build a country, just like they built Europe. Because Europe was not born just like that. Europe was made by many waves of migrants over the centuries,” he said.

The importance of community, he told the religious institute, can be seen in how often migrants make their journey together as a group, like “the caravan that is going from Honduras to the United States.”

“Sometimes (a migrant) has to go alone, but it is normal to stick together, because we feel stronger” that way during the journey “and that is where the community is,” he said.

The pope urged the religious to feel and work like a community, just like the migrants they help. Even though, for example, a soccer player is free to act on his or her own, this possibility does not exist for members of a religious order because in religious life, “free agents fail.”

“Feel like migrants, yes, feel like migrants in need, migrants before the Lord,” knocking on his door in prayer, like migrants knock on the door of receiving countries, and live like “migrants among yourselves,” sticking together in community life, he said.

NEXT: Human bones discovered at Vatican nunciature in Italy