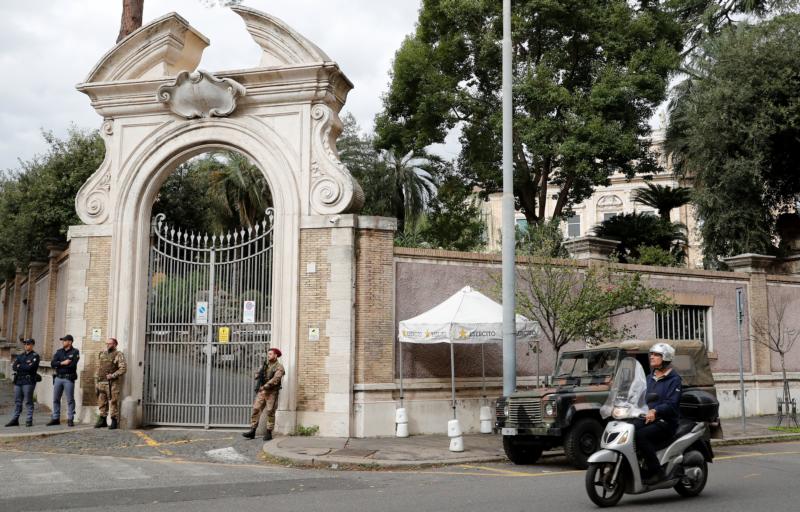 Italian Army and police officers stand in front of the apostolic nunciature to Italy in Rome where workers discovered human bones during a reconstruction project. Italian media immediately raised the possibility that they could be the remains of a Vatican employee’s daughter who was kidnapped 35 years ago at the age of 15. A forensic examination of the bones is underway, the Vatican said Oct. 30. (CNS photo/Stefano Rellandini, Reuters)

VATICAN CITY (CNS) — The Vatican press office confirmed news reports that human bones had been found during reconstruction work in a building connected to the Vatican Embassy to Italy.

Italian media immediately surmised that the bones could be those of Emanuela Orlandi, the daughter of a Vatican employee who presumably was kidnapped in 1983 at the age of 15. The case has never been solved but has been the subject of speculation for more than 35 years.

In a statement late Oct. 30, the Vatican press office said Rome’s chief prosecutor has asked police to carry out a forensic study of the bones to determine “the age, sex and date of death.”

“During some reconstruction work in a building connected to the apostolic nunciature to Italy,” the statement said, “some human bone fragments were found.”

Vatican police were called, and they called “superiors of the Holy See, who immediately informed Italian authorities for the appropriate investigations.” The nunciature is sovereign Vatican property, so the Italian police enter only when requested to do so.

The Vatican statement did not provide details about the building where the bones were found. The nunciature itself is housed in Villa Giorgina, a structure built in 1920 and given to the Vatican in 1949. The nunciature, or embassy to Italy, moved into the premises 10 years later. 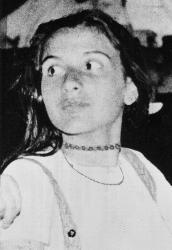 Emanuela Orlandi is pictured in a photo that was distributed after her presumed kidnapping in 1983. (CNS file photo)

Investigations into the disappearance of Emanuela have been recurring over the past 35 years. Her father was a papal usher and the family lived in the Vatican.

Because she lived inside the Vatican and no trace of her was ever found, her case has been an obsession for Italian conspiracy theorists, some of whom have tried to link the case to the Freemasons, the Soviets, organized crime or to victims of the 1982 collapse of Italy’s Banco Ambrosiano, which had close ties to the Vatican Bank.

But the most common conjecture is that she was kidnapped by a group connected to Mehmet Ali Agca, the Turk captured in St. Peter’s Square moments after shooting Pope John Paul II in 1981 and later convicted of attempted murder. The suspicion was strengthened by several letters signed by the “Turkish Anti-Christian Turkesh Liberation Front,” which said Emanuela would be freed if Agca were released from prison.

NEXT: Fidelity is for every vocation, not just marriage, pope says