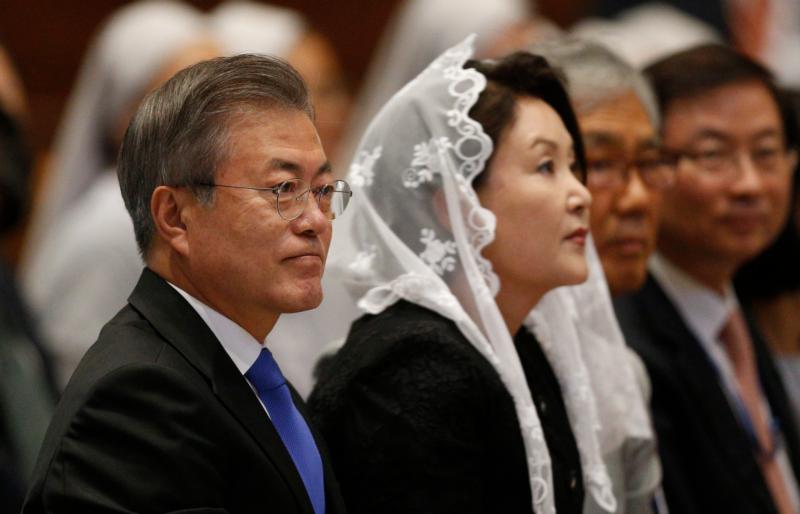 North Korean leader Kim Jong-un had asked Moon to tell the pope of the invitation. According to Yonhap, the Korean news agency, Moon’s press secretary told reporters the pope said he would accept “if an (official) invitation arrives and I can go.'”

“Move forward without stopping. Do not be afraid,” the pope told Moon according to Yonhap.

In a statement released after the meeting, the Vatican said Pope Francis and Moon discussed the church’s role in promoting “dialogue and reconciliation between Koreans.”

“Strong appreciation was expressed for the common commitment to fostering all useful initiatives to overcome the tensions that still exist in the Korean Peninsula, in order to usher in a new season of peace and development,” the Vatican said.

Greeting Moon at the entrance to the library of the Apostolic Palace, the pope said, “Welcome! It is nice to see you.”

“I come here as the (South) Korean head of state but I am also Catholic and my baptismal name is Timothy. And for me it is an honor to meet you,” Moon replied.

The South Korean leader also thanked the pope for taking time to meet him despite his busy schedule during the Synod of Bishops.

According to the Vatican press pool, Pope Francis and Moon spoke privately for more than 30 minutes, assisted by a translator, Korean Father Han Hyun-taek.

After their private meeting, Moon presented the pope with a Korean artist’s sculpture of Christ’s face adorned with a crown of thorns. The thorns, Moon explained, “are the sufferings of the Korean people.”

Among the gifts the pope gave Moon was a split medallion held together by an olive tree which he said was “a symbol of peace in the Korean Peninsula.”

Before departing, Moon thanked the pope again for welcoming him and said, “You are not only the head of the Catholic Church, but also a teacher for humanity.”

“I wish you well in your work for peace,” the pope replied.

The evening before his meeting with the pope, President Moon attended a Mass for Peace in the Korean Peninsula presided by Cardinal Pietro Parolin, Vatican secretary of state.

Addressing those present after the Mass, President Moon said the historic signing of the Pyongyang Joint Declaration between North and South Korea as well as their commitment to ending the decades-long military confrontation were “blazing the trail for a noble endeavor that will secure the future of peace for the Korean Peninsula and the whole world.”

“Right now, on the Korean Peninsula, historic and heartwarming changes are taking place,” he said.

President Moon also thanked Pope Francis for blessing “our journey toward peace” and walking “together with us through his prayers.”

“Our prayers today will turn into reality for sure,” he added. “We will achieve peace and overcome division without fail.”

In his homily during the Mass in St. Peter’s Basilica, Cardinal Parolin said that the peace offered by Christ to his disciples after his resurrection is the same peace offered to the hearts of men and women “who search for true life and full joy.”

The first reading from the Book of Deuteronomy — in which God promises the people of Israel that although they are “dispersed to the farthest corner of the heavens, even from there will the Lord, your God, gather you” — reflects the prospects of peace between North and South Korea, he said.

“The wisdom of Scripture makes us understand that only those who have experienced the inscrutable mystery of the apparent absence of God in the face of suffering, oppression and hatred can fully understand what it means to hear the word peace resound again,” the cardinal said.

The Vatican secretary of state said that although peace is built daily through a serious commitment to justice and solidarity as well as the protection of human rights and dignity, it is first and foremost a gift from God that “is not an abstract and distant idea but an experience lived concretely in the daily journey of life.”

The peace that God offers, he added, “is not the fruit of a simple compromise” but involves “all the dimensions of life, even the mysterious ones of the cross and the inevitable sufferings of our earthly pilgrimage.”

“Christian faith,” Cardinal Parolin said, “teaches us that ‘peace without the cross is not the peace of Jesus.'”

PREVIOUS: Without a doubt: Pope shares his thinking on key synod themes