Without a doubt: Pope shares his thinking on key synod themes 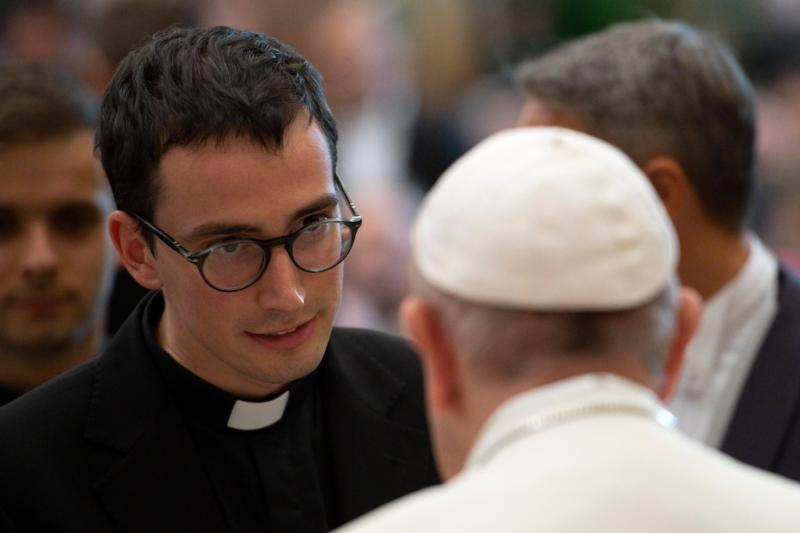 Pope Francis greets a participant during a meeting with seminarians from Italy’s Lombardy region at the Vatican Oct. 13. (CNS photo/Vatican Media)

VATICAN CITY (CNS) — Having some doubts is definitely better than having no doubts at all, Pope Francis told a group of seminarians.

As the Synod of Bishops on “young people, the faith and vocational discernment” was continuing at the Vatican, the pope tackled some of the synod’s key questions when he met Oct. 13 with seminarians from the Lombardy region of northern Italy.

A young man named Daniele from the Diocese of Mantova told Pope Francis that while his year of preparation before beginning seminary studies is mostly one of joy, “sometimes, behind this enthusiasm, there hide seeds of doubt and struggle with the idea of following Jesus through the priesthood in today’s society.”

Pope Francis has attended most of the general sessions of the synod and, according to the Vatican press office, had requested the floor at least twice to give his input during the “open discussion” that ends each evening. The Vatican did not, however, say what the pope said.

But his talk to the Lombardy seminarians gives an indication of his approach to the topic of vocational discernment; his long question-and-answer session with them included both longstanding ideas and new insights that may have been motivated by listening at the synod to bishops, priests, religious and laypeople, including 34 observers under the age of 30.

Daniele, the seminarian, had referred to doubt as a cross. The pope said it may be, but it is a fruitful cross.

“I don’t trust people who never doubt,” the pope said. “Doubt puts us in crisis. Doubt makes us ask ourselves, ‘Is this good or not?'”

Of course, Pope Francis said, too much doubt is not healthy, but if there’s some doubt and it makes a Christian stop and ask, “Does this come from God or not? Is this positive or not?” then it is actually a motivation for discernment.

Another big theme at the synod that was echoed in the question of a seminarian had to do with evangelization in a time of increased secularization.

While some of the synod members seemed to view secularization has a huge obstacle for the church, Father Arturo Sosa, superior general of the Jesuits, asked synod members to try to think — discern — what God is trying to tell the church through secularization. Perhaps, he said, part of it has to do with challenging people to make a clear choice to be a Christian, rather than belonging to the church just because their parents and grandparents did.

But Pope Francis took a slightly different tack with the seminarians. “You say, ‘this increasingly secularized world,’ but I say, which world was more secularized: ours or that of Jesus?”

While some Christians may be tempted to throw up their hands faced with such a challenge, Jesus’ mandate to Christians today is the same as it was then, the pope said: “Go out,” get close to people and share the good news.

A seminary staff member from Cremona asked Pope Francis for suggestions on how those in charge of formation can prepare young men to be ministers in a church that is a “field hospital” and how they can help the young prudently try new things to bring God’s love and mercy to people.

“But it’s risky,” Pope Francis said he could hear his audience thinking.

While someone may slip while on the move, making mistakes teaches humility, he said, even admitting that he has prayed for God to “toss a banana peel” in the path of a certain priest to help the man be humbler.

Everything in life involves a process, the pope reminded the group of seminarians and seminary staff members. “Babies aren’t born adults; it’s all a process of becoming, a process of maturation or corruption,” of growing in virtue or growing in vice.

To help young people mature in their faith and commitment to the Gospel, look to how Jesus was with his disciples, the pope said.

Jesus “knew how to tolerate mistakes” and did not give up even when Peter denied him or the other disciples ran away, the pope said. “Jesus placed his bet on time, on the development of the disciples.”