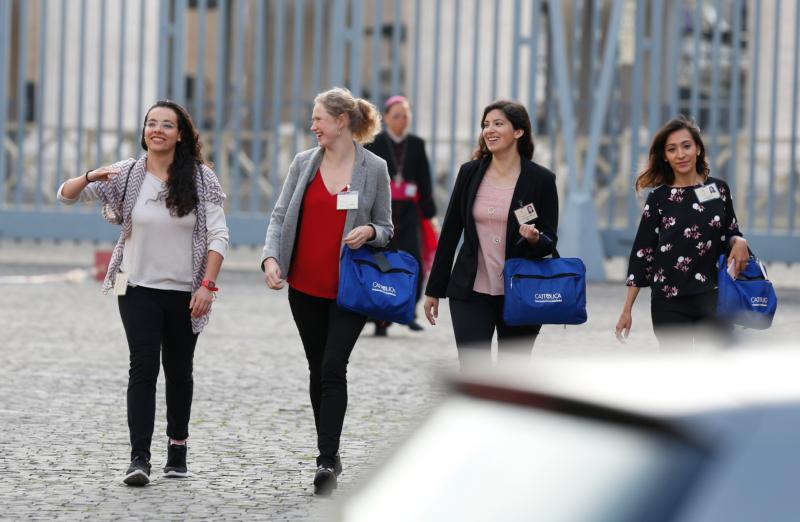 Synod youth delegates arrive for a session of the Synod of Bishops on young people, the faith and vocational discernment at the Vatican Oct. 16. (CNS photo/Paul Haring)

VATICAN CITY (CNS) — In their second round of reports to the Synod of Bishops, a number of working groups called for qualified and, in some way, supervised spiritual mentors or directors, recommended including more female figures from the Bible as examples and role models for young people, and praised having the inspiring input of young people during the gathering.

The second week of discussions centered on discernment, vocations and accompaniment, and the 14 working groups, which are divided by language, each came up with a number of suggestions, critiques and recommendations for the synod’s final document. The Vatican released the reports Oct. 16.

The working group English-A, which includes bishops from the United States, Australia, Ireland and England, said the synod “came alive” when young people gave their interventions, with one bishop in the group commenting, “I never realized a synod could be so much fun!”

The group recommended the final document present “a clear definition of vocation,” keeping in mind it should be speaking not only to practicing Catholics, but also to the “nones.”

The group also suggested including in the final document “a distinct treatment of the response of Mary to God’s call” and seeing her as the “archetypal disciple.”

While recognizing the key role families, friends and schools play in accompanying young people on their faith journey, the English-A group emphasized the need for “trained mentors” who had proper formation as well as “accompaniment/supervision” themselves so they could be effective spiritual guides.

The English-B group proposed that young people be prompted to “connect with Jesus’ youth and understand their lives in its light,” for example, by recognizing how Jesus personally experienced many young people’s struggles, such as being a refugee, growing up in an “underprivileged household,” being misunderstood at times by family and unappreciated by others.

The English-C group praised the use in the synod working document of examples and people from the Bible as concrete reference points for young people, but questioned its inclusion of figures such as Joshua since he led an army of conquest and Esther, whose example “is also full of violence and trickery.”

In an effort to pinpoint what “true” accompaniment would look like, the group said:

— It must respect that discernment belongs to the person being accompanied, not the mentor, avoiding all forms of manipulation and well-intentioned, but “inappropriate” forms of mentorship.

— The final document should develop further “respect for the freedom and conscience of the person being accompanied.”

— Accompaniment needs “a climate of friendliness, trust and warmth,” without the mentor losing needed objectivity and the ability to offer “fraternal correction.”

The importance of formation for mentors and spiritual directors also received much discussion in the English-D group, which included bishops from Canada and the United States, such as Cardinal Daniel N. DiNardo of Galveston-Houston and Auxiliary Bishop Robert Barron of Los Angeles.

Even though one member of the group insisted “any baptized person can be an effective even powerful role model in the Christian life,” the group as a whole felt “the art of authentic spiritual mentorship requires specific training” and expertise.

Some in the group “warned that spiritual teachers too frequently devolve into gurus and encourage a cult of personality around themselves,” so “unmentored mentors” are not wanted or needed in the church.

The group noted “with a certain sadness that many prospective mentors today, especially in the West, are reluctant to enter into a relationship with a directee for fear that they might be accused of boundary violations.”

Group members also praised the use of biblical figures and their lives to help inspire young people, however, several young women in the group recommended the inclusion of more women “who cooperated mightily with the Lord,” such as Mary, Ruth, Deborah, Hannah, Abigail and Tabitha.

The French-A group said the spiritual accompaniment of an individual “does not do everything” and underlined the essential role of the family, peer groups and the community in “awakening” young people to God’s call and helping them live a virtuous life.

The French-B group requested that the final document cover the training of those who accompany or guide young people, because without the necessary skills, “the process is doomed to failure.”

They also addressed needing to reach out to single, unmarried people and reminding them that they, too, have a vocation, which ultimately is becoming an “adopted” child of the Father in Christ. “This is why it seems to us that we cannot say that people living alone do not have a vocation or that they refuse a vocation.”

— The need to reach out to young people who belong to gangs. “Their only love is that of the group and it is not easy to enter such closed environments nor is it easy for young people to get out of them.”

— Questions regarding the best ways to approach homosexuals, “who cannot be left out of our pastoral care,” and how pastors should respond to the issues of homosexual unions, surrogate motherhood, adoption by same-sex couples and other issues they believe are being promoted by international institutions.

— The large number of priests “who are waiting for the accompaniment of their bishops.”

The German-language group said one of the most important tasks all members of the church have is to show young people that they are loved simply because they exist and because of who they are, not because they are already good, capable, efficient or because they have certain qualities or are part of a group.

The Portuguese-language group said when it comes to sharing the faith, “we cannot reduce faith to a morality. The Christian proposal needs to be embodied in concrete experiences. It is necessary to return to the proposal of Jesus: ‘Come and see!'”

Concerning affection and sexuality, the church should begin with the basic Christian principles of the value of human life and the dignity of the body as a way to open dialogue with nonbelievers, the group said.

“The doctrine of the church in this field is beautiful and rich. It is necessary to present it with clarity, believing in the force of attraction contained therein and surpassing the vision of those who see it only as something rigid.”

The synod should also reflect on the vocation of those who remain single and those who are homosexual, it said. “It is not the mission of the church to respond to all particular realities, but it is her duty to care for, to accompany, to help the young person to give direction and direction to his or her own life, to help them to do good.”