Young people must learn from mistakes of the past, pope says 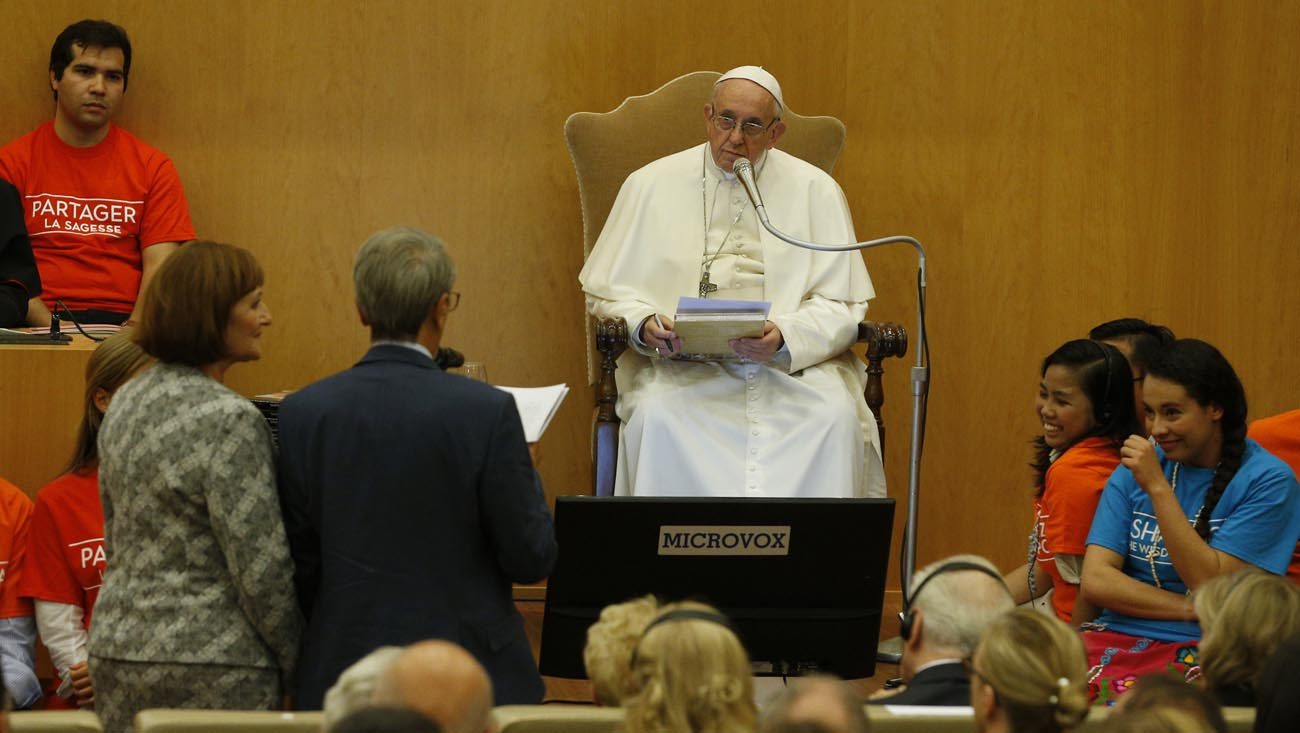 Pope Francis listens as a couple asks a question during the release of the book, "Sharing the Wisdom of Time," in Rome Oct. 23. In the book the pope offers commentary on the life stories of older people throughout the world. (CNS photo/Paul Haring)

VATICAN CITY (CNS) — Pope Francis said young men and women today need to learn from their elders what led to the great wars of the 20th century so “they won’t fall for the same mistake.”

“It is important that young people know the results of the two wars of the last century. It is a negative treasure but a treasure (nonetheless) that should be passed on to create awareness,” the pope said Oct. 23.

Hundreds of people — both young and old — packed the auditorium of the Augustinian Patristic Institute across the street from the Vatican for the presentation of a new book, “Sharing the Wisdom of Time,” which is inspired by the pope’s call for “an alliance between the young and old people.”

“Pope Francis contributes as a fellow elder, offering the preface and his own story in each chapter, while also reflecting on dozens of others’ stories,” according to the book’s website.

During the event, titled “Wisdom of Time: An Intergenerational Conversation with Pope Francis,” the pope took questions from both elderly and young people on issues ranging from the crisis of faith that exists in the world to the plight of migrants and the suffering of humanity.

Among those who asked the pope a question was famed Hollywood director Martin Scorsese.

Recalling his childhood parish in a rough New York neighborhood surrounded by poverty and violence, Scorsese said that still today, the world, and even the church itself, “is marked by evil.”

“How can we elderly people strengthen and guide the young and what they have to go through in life? How can the faith of a young woman or man survive in this maelstrom? How can we help the church in this endeavor?” Scorsese asked the pope.

Pope Francis said that one of the ways evil is manifested in the world is through cruelty, particularly the use of torture, which is the “destruction of human dignity.”

The elderly must teach young people that “cruelty is the wrong path” by passing on “the wisdom of weeping; the gift of crying,” the pope said.

Even Jesus, “when he saw the failure of his people, he cried over Jerusalem,” the pope said. “Cry. Do not be afraid to cry for these reasons. We are human.”

“Before this violence, this cruelty, this destruction of human dignity, weeping is human and Christian,” the pope said. “And ask for the grace of tears. Because crying softens the heart, it opens the heart, it is a source of inspiration. Cry.”

Fiorella Bacherini, an 83-year-old mother of three, including one who is a Jesuit priest, said she was fearful of the cruelty against migrants and refugees and “how easy it is to make hate grow among people.”

“I don’t want to discuss politics, I am speaking about humanity,” Bacherini told the pope. “I am reminded of the moments and memories of war that I lived through as a child.”

The pope recalled the stories he heard of World War I from his grandfather and discovered the pain wrought by war and violence when thousands of immigrants from Italy, Poland and Germany arrived in Buenos Aires during World War II.

By listening to those experiences, he said, “we understood what a war was, which we didn’t know” in Argentina.

Elderly people who have lived through war must pass on their experiences to today’s generation, who are living through “a third world war fought in pieces,” the pope said.

“World War III is on its way, I don’t believe I’m exaggerating in this,” he said. “It reminds me of Einstein’s prophecy: The fourth world war will be fought with rocks and sticks because the third will destroy everything. To sow hatred is a path of destruction, of suicide.”

Hatred is a path of “destruction, of suicide” that is often disguised with seemingly just reasons. For example, the pope said, Hitler “covered it up with maintaining the purity of the race,” which is the same reason being used today to justify refusing to help migrants and refugees.

PREVIOUS: Pope calls for stronger preparation for sacrament of marriage