Pope calls for stronger preparation for sacrament of marriage 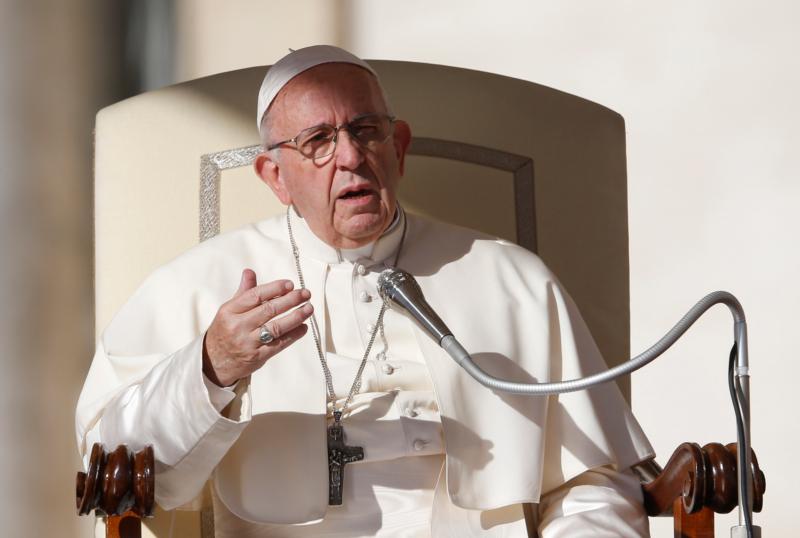 “Christ reveals authentic love,” the pope said Oct. 24 during his weekly general audience. “He is the faithful friend who welcomes us even when we make mistakes and he always wants what is best for us, even when we don’t deserve it,” he said.

“Indeed, no human relationship is authentic without fidelity and loyalty,” he told thousands of pilgrims in St. Peter’s Square.

Continuing his series of talks on the Ten Commandments, the pope reflected on Christ’s explanation of the Sixth Commandment, “Thou shall not commit adultery.”

“What God has joined together, no human being must separate” and whoever divorces their spouse to marry another, commits adultery, Jesus said according to St. Mark’s Gospel.

There are many forms of adultery, the pope said in his audience talk, and fidelity actually reflects “a way of being” and living in the world.

“You work with devotion, you speak with sincerity, you stay faithful to the truth in your thoughts and deeds,” he said.

Men and women whose lives are “woven with fidelity” are “faithful and trustworthy in every circumstance,” he said.

But “our human nature is not enough” for bringing about this beautiful way of life, he said. “It is necessary for God’s fidelity to come into our lives and ‘infect’ us.”

“The Sixth Commandment calls us to turn our gaze to Christ, who with his fidelity can take away our adulterous heart and give us a faithful heart,” the pope said.

The pope reiterated his call for stronger and more effective catechesis in preparation for marriage. This new catechumenate is necessary, he said, because “you can’t play around with love,” especially when it comes to making a vow that lasts a lifetime.

A marriage preparation program that involve just a few meetings is not preparation, “it is fake,” he said. It is the full responsibility of the parish priest and bishop to make sure the proper amount of time and discernment have been spent preparing for something that is a true sacrament, not a just formality.

The pope said that “every human being needs to be loved unconditionally” and those who do not experience this will seek to fill the void with “surrogates,” accepting “compromises and mediocrity” that hardly qualify as love, and mistaking “puppy love” and immature relationships as the true “light” of one’s life.

Men and women seeking marriage must go beyond physical attraction and discover through a mature and lengthy discernment “the quality of their relationship.”

They must discern with certainty whether “the hand of God” is leading and accompanying them on their journey, he added.

A couple cannot promise to be faithful “for better, for worse” and to love and honor each other every day of their lives “only on the basis of good intentions or on the hope that things ‘work out.’ They need to base it on the solid terrain of God’s faithful love.”

NEXT: Young people must learn from mistakes of the past, pope says