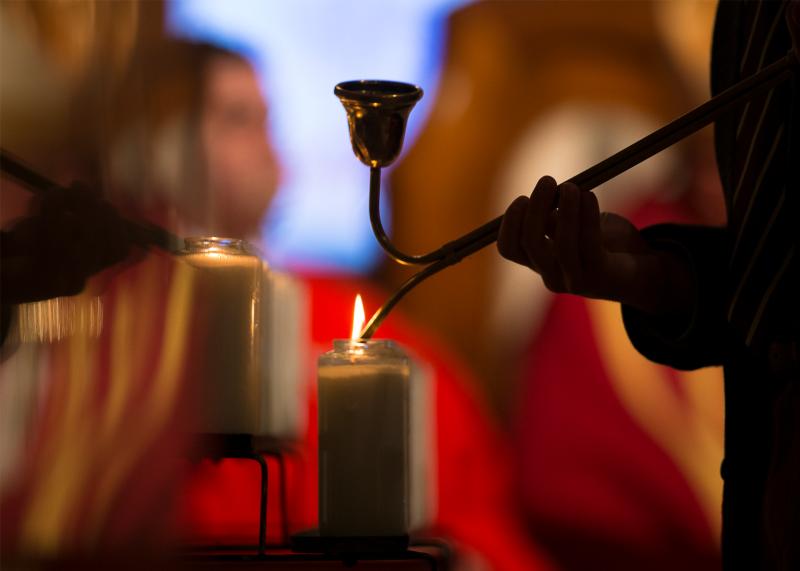 A participant lights a candle in recognition of a Christian martyr Nov. 28 during a vespers service in the Crypt Church at the Basilica of the National Shrine of the Immaculate Conception in Washington. (CNS photo/Tyler Orsburn)

WASHINGTON (CNS) — Catholic churches throughout the world were bathed in soft red light to honor martyrs and mark the “Courage in Red — Stand Up for Faith and Religious Freedom” campaign sponsored by Aid to the Church in Need.

So it was Nov. 28 at the Basilica of the National Shrine of the Immaculate Conception, where a quiet vespers service, “A Night of Witness,” commemorated the martyrdom, just in the last two years, of some 22 members of the priesthood, most of them in Mexico and South America, and 82 others killed in terrorist attacks in Pakistan and Egypt.

Most martyrs are killed anonymously while simply going about their jobs before being caught up in the violence from civil wars and terrorist groups.

“They may not be on the covers of magazines. They may not ever make the news. But they gave their blood for the church,” observed Msgr. Vito Buonanno, director of pilgrimages at the basilica.

“Tonight, we seek to remember all of them,” said George Marlin, chairman of Aid to the Church in Need, is an international papal charity that provides pastoral and humanitarian aid to persecuted and oppressed Christians and supports various church projects in more than 140 countries.

“The church has lived through many periods of persecution, claiming the lives of millions,” Chaldean Catholic Archbishop Bashar Warda of Irbil, Iraq, reminded worshippers during his testimony. “Christianity is the most widely targeted religious community, suffering terrible persecution globally.”

“The church in Iraq,” he said, “is a martyr church. Since 2003, 61 churches and shrines were burned, destroyed or bombed. Over 25,000 homes seized. 150,000 Christians were displaced, and most since 2014. Countless Christians have been kidnapped or murdered. A bishop, three bishops and six deacons were murdered.

“We are closer to God in our suffering. St. Paul said, ‘I want to know Christ.’ Yes. To know the power of his resurrection and participation in his suffering, becoming like him, in his death,” the archbishop continued.

“Our persecution continues to make us a church of peace and reconciliation, transforming us into an apostolic missionary church,” he added. “The first church recognized the primacy of God in which our live and our being has lived. The church never lost its faith during persecution, but bore everything with a great confidence that the victory is always for God.”

Bishop Oliver D. Doeme of Maiduguri, in northeast Nigeria, experienced 1,500 killed in his diocese by members of Boko Haram since 2009. Members believe “women’s education is evil, so it should be eliminated, and Christianity, according to them, should also be eliminated.”

With the group now largely driven out, Christians returned to find houses of worship destroyed, “but the good news, is that our people have unshakable faith,” Bishop Doeme said.

Sister Annie Demerjian, whose ministry with the Sisters of Jesus and Mary has been in Aleppo, Syria, spoke of the long-term damage to children from the ongoing civil war there.

“Many people feel suffering from the consequence of the war. Healing of memories and healing of wounds, it will take years and years. This war has astonished many nations by its violence and brutality. It has robbed children of their childhood and innocence …”

“In the time in which we moved from (our) school and we shared another school, we shared afternoon times at school. And our little children, 4 years old, they were carrying (flashlights) in their hands. And when it became dark, they put it on, and they continued their lessons. For me, it taught me a lot. Even though they are little — small angels — they can adapt themselves to the situation we are facing.”

After the end of the conflict, she warned, children “will be stamped by this negative attitude of violence.” Those born during the war, “all what they saw were violence, destruction and death. Many children stayed without education.”

In a century of continuing scientific advances, “How come men have not yet found a way of living in harmony, justice and peace with one another?” she asked.

Other services in the preceding days were held at the Co-Cathedral of St. Joseph in Brooklyn, New York, St. Francis of Assisi Cathedral in Metuchen, New Jersey, and Epiphany Cathedral in Venice, Florida. Those churches and the national shrine in Washington were illuminated at dusk by red lights.

The “Courage in Red’ campaign in previous years has illuminated Westminster Abbey and the Houses of Parliament in London, the Colosseum in Rome and the Christ the Redeemer statue in Rio de Janeiro.

This year’s “Courage in Red” also illuminated landmarks including Sagrada Familia Cathedral in Barcelona, the Sacre Coeur Basilica in Paris, Westminster Cathedral in London and the Basilica of Santa Maria della Salute in Venice, as well as the Rialto Bridge and parts of the Grand Canal there. 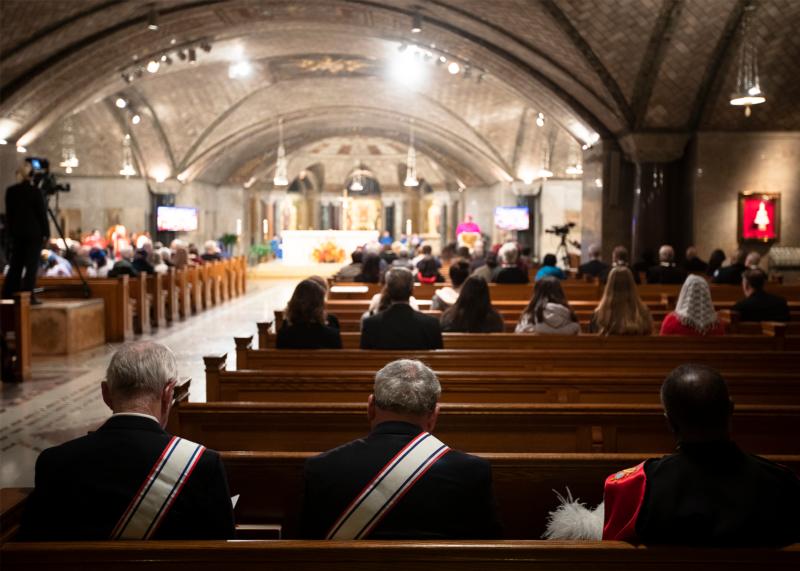 People attend a vespers service for today’s Christian martyrs Nov. 28 in the the Crypt Church at the Basilica of the National Shrine of the Immaculate Conception in Washington. (CNS photo/Tyler Orsburn)