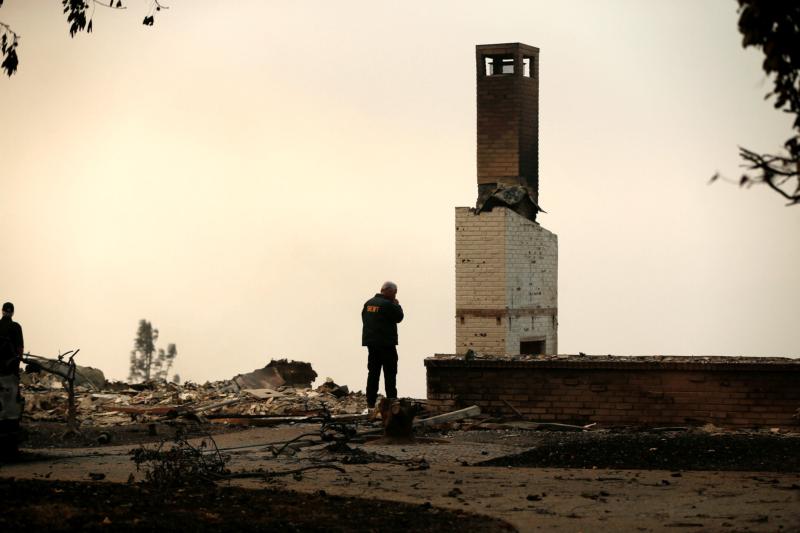 A Butte County Sheriff deputy surveys a home Nov. 11 that was destroyed by the Camp Fire in Paradise, Calif. Catholic schools in the Diocese of Sacramento are opening their doors to all students displaced by the fires to attend their schools tuition free for the rest of the year. (CNS photo/Stephen Lam, Reuters)

WASHINGTON (CNS) — Once the California wildfires were contained — after burning for more than two weeks and ravaging the town of Paradise and nearby neighborhoods — those displaced by the raging fires began the process of resuming their lives.

The Camp Fire, the nation’s deadliest fire in the past 100 years, killed 88 people and left nearly 200 unaccounted for. It also scattered local residents far and wide, with some living with family or friends nearby and others in makeshift shelters or tent cities.

Getting students back to school is just one of the monumental tasks ahead for the region with displaced families and closed schools.

In Paradise, eight of nine public schools were destroyed as were two of six charter schools.

There are no Catholic schools in Paradise, but Catholic schools in the Diocese of Sacramento have opened their doors at six elementary schools and a high school to all students displaced by the fires to attend these schools tuition free for the rest of the year.

“We understand that it may be a long time before students can return to their schools and classrooms in the city of Paradise, and we would like to help by opening up our schools to Butte County students, grades preschool — 12, who have been displaced by the fires,” said Lincoln Snyder, executive director of schools, in a Nov. 21 statement to Butte County Families.

Snyder, who spoke to Catholic News Service Nov. 29, said diocesan Catholic school leaders “felt like this was the right thing to do” and were confident they would find the money to support this endeavor.

The description of the fund says it will be used to pay for “uniforms, school materials, hot lunches, field trips” and other expenses including material and tuition relief for our currently enrolled school families in need.

To date, $10,000 has been donated and 20 students have been placed in diocesan Catholic schools.

St. Thomas the Apostle School in Oroville, 20 miles south of Paradise, has taken in three students so far and a few more displaced families are currently talking with the school about sending their children.
Kasia Heinert, school principal and current fifth- and sixth-grade teacher for the school’s combined classes, said so many of the students have asked her: “What can we do?” since the wildfires began.

She said students have been taking part in clothes drives, serving food and walking shelter dogs during the fires and were happy to welcome displaced students to their small school community of 88 students in preschool to eighth grade.

“It’s important now, especially entering the season of Advent; we try to provide opportunities for our students to give back,” she said.

She said a mother of one of the new students was almost in tears wondering about getting shoes and a uniform but Heinert assured her the school would help her with that.

The principals also were given gift cards to give to families, she said.

The Camp Fire came within five miles of St. Thomas and smoked filled the air around it for days, but its raging flames were close to home in other ways too since homes of former students’ and a former teacher were destroyed in the fire.

Heinert said the Catholic school outreach and the response to it from people across the country has been inspiring, “especially after everything the Catholic Church has been through in the news lately.”

She said she heard from someone in Florida who heard about what Sacramento Catholic schools were doing and said: “I am so proud to be Catholic.”

“That gave me goose bumps,” the principal said.

PREVIOUS: Forum explores use of fetal tissue in medical research

NEXT: ‘A Night of Witness’ service commemorates life, faith of today’s martyrs