Archival discovery at Catholic U. leads to Kristallnacht remembrance 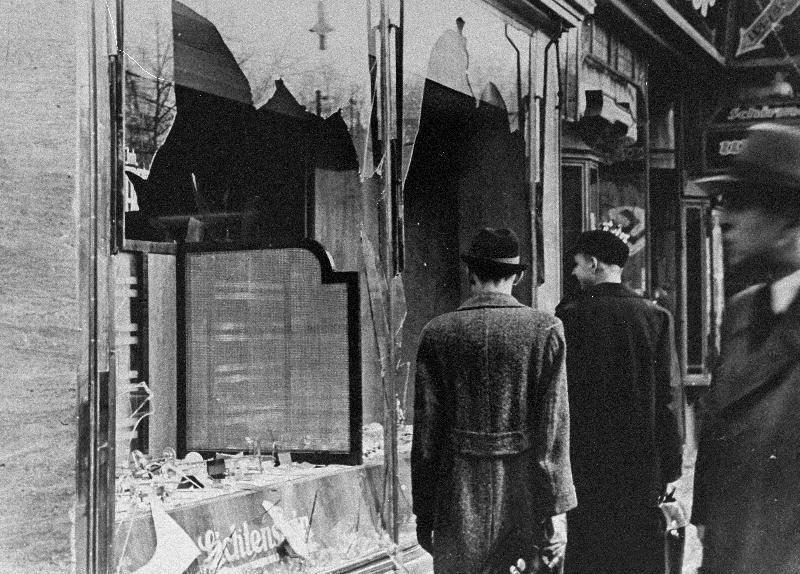 In a direct German translation, it means “Crystal Night,” but it is more commonly thought of as “Night of Broken Glass,” as Nazis and their sympathizers rampaged through Nazi Germany — which by this time had absorbed Austria and the Sudetenland — the night of Nov. 9-10, 1938.

More than 7,000 Jewish-owned stores and businesses were damaged, more than 250 synagogues destroyed, more than 3,000 Jews arrested and sent to concentration camps, and nearly 100 more killed during the rampages, which shocked the world.

It was an open question, though, as to how American Catholics felt about Kristallnacht, which some had likened to a pogrom in which Jews are forcibly exiled. Father Charles Coughlin, the “radio priest” during the Depression, had been for years salting anti-Semitic commentary into his weekly broadcasts, which reached tens of millions of people, despite the grumblings of several U.S. bishops who wanted him off the air.

But it was the discovery in The Catholic University of America’s archives in 2004 of an old, scratched record, labeled only “Catholic Protest Against Nazis — Nov. 16, 1938,” that set the wheels in motion for a long-overdue reconsideration of Catholic attitudes toward anti-Semitism in general, and Kristallnacht in particular.

The record, which was unplayable with the university’s own equipment, had to be sent elsewhere to be digitized. What it contained was a half-hour program featuring Catholic bishops from across the nation, and former New York Gov. Al Smith, who in 1928 had become the first Catholic presidential nominee of a major political party, roundly condemning the Nazis’ actions and expressing solidarity with Jews under the Nazis’ rule.

Based on the discovery of that disc, Catholic University is hosting its own Kristallnacht remembrance Nov. 16, the 80th anniversary of that broadcast.

The free event will feature performances by faculty and students of musical selections by Jewish composers, and a composition written by Catholic University music professor Joseph Santo, “Malachey Elyon” (“Messengers of the Most High”), which incorporates texts from the broadcast.

Speakers will include university president John Garvey; Zion Evrony, former Israeli ambassador to the Vatican and a visiting Catholic University professor; CUA education archivist Maria Mazzenga on her research of the recording; and Jacqueline Leary-Warsaw, dean of CUA’s School of Music, Drama and Art.

After determining the record’s content, “I contacted the folks at the (United States) Holocaust (Memorial) Museum,” said Mazzenga in a Nov. 6 telephone interview with Catholic News Service. “This was something huge,” she added. “It’s changed the literature on Catholic responses to the Holocaust — distinctly Catholic responses.”

Further fruits from the recording netted a front-page New York Times article on the broadcast the day after it aired on both NBC and CBS — a joint presentation unusual even then for competing networks.

Mazzenga also was able to track down five legal-size pages featuring the full transcript of the broadcast distributed by CNS’ predecessor, National Catholic Welfare Conference News Service. “NCWC did a great job publicizing” the events of the time, she said. Mazzenga later edited a book and contributed an essay in a series of academic papers presented at a Holocaust Museum workshop inspired by the discovery.

A little further digging in the CUA archives found correspondence that spanned nearly a year between Irving Sherman, head of the Atlas Publishing and Novelty Co. of New York City, and Catholic figures who spoke on the broadcast.

In a Nov. 25, 1938, letter to Cardinal Dennis Dougherty of Philadelphia, Sherman wrote: “I, and I believe millions of others, cannot believe in your sincerity to teach democracy while you have a Father Coughlin openly preaching hate against his fellowmen,” with the “e” printed by hand over the typed “a.”

Father Charles Edward Coughlin was a Canadian-American priest based in Detroit who used radio to reach a mass audience. During the 1930s, an estimated 30 million listeners tuned to his weekly broadcasts. He eventually was forced off the air in 1939 because of his pro-fascist and anti-Semitic rhetoric.

Sherman received a reply from Cardinal Dougherty, but it must have been unsatisfactory, for the businessman wrote back to the prelate: “With the Catholic Church and it strong organization, there should be no difficulty in squelching Father Coughlin at all. Instead of being humble and fully admitting that he did not tell the truth in regards to his accusations against the Jews, International Bankers, etc., he now shouts it further.”

Later, in a missive to Catholic University rector Father Joseph Corrigan — later a bishop — Sherman complained about the “so called man of God Father Coughlin.”

Father Corrigan wrote back: “Those who would stigmatize the Catholic Church for such conduct of one individual come very close themselves to the standard of judgment which they deplore when applied to themselves. It would be a wrong, and it truly is, to condemn Jews for the culpable actions of some Jews. How, then, can it be right to blame the Catholic Church for the attitude of one member?

“I have written you to this extent, my dear Mr. Sherman, in the hope that you will understand the difficulties of our position.”

Thus began a fairly fruitful exchange between the two. In a letter to Father Corrigan dated Sept. 15, 1939 — two weeks after World War II began in Europe — Sherman sounded hopeful. “Our mayor is now taking evidence so as to prosecute the speakers who incite to riot and I think that now that Russia and Germany have aligned themselves together, these conditions of which I complain of may be eliminated.”

He added that fellow members of the Jewish War Veterans of America were planning to sue Father Coughlin for his on-air remarks. It took another year, but Father Coughlin was forced off the air. The priest was silenced by the Vatican in 1942.

NEXT: Buffalo bishop responds to criticism, says he has no plans to resign