Cardinal: Delay in vote on abuse response proposals a ‘bump in the road’ 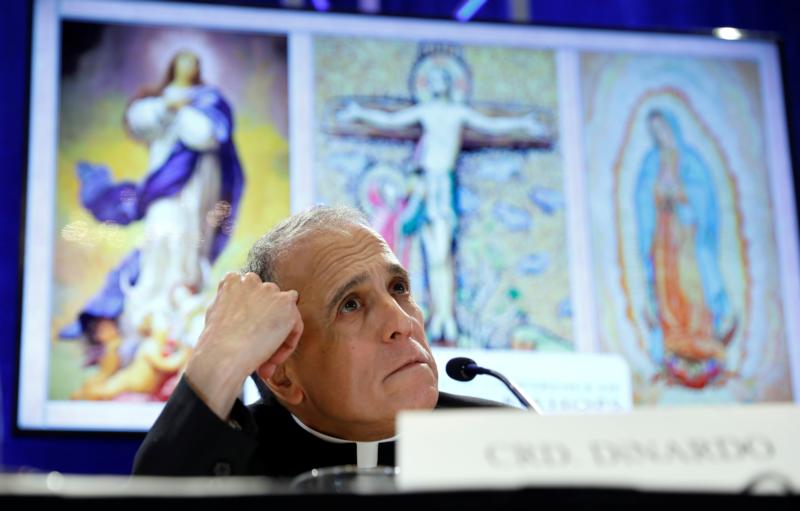 Cardinal Daniel DiNardo, president of the U.S. Conference of Catholic Bishops, looks up while holding a press conference Nov. 12 at the bishops’ general assembly in Baltimore. (CNS photo/Kevin Lamarque, Reuters)

BALTIMORE (CNS) — A Vatican-requested delay in adopting practices that are expected to boost accountability among U.S. bishops in their response to clergy sex abuse is a “bump in the road,” said the president of the U.S. Conference of Catholic Bishops.

Cardinal Daniel N. DiNardo of Galveston-Houston told reporters Nov. 12 that the Congregation for Bishops at the Vatican requested that no vote be taken on the proposals during the bishops’ fall general assembly.

The proposals include standards of episcopal conduct and the formation of a special commission for review of complaints against bishops for violations of the standards.

They are among steps developed by the USCCB Administrative Committee in September in response to the firestorm that has emerged since June over how the bishops handled reports of wayward priests.

The Administrative Committee consists of the officers, chairmen and regional representatives of the USCCB.

“We have accepted it with disappointment,” Cardinal DiNardo said of the congregation’s request during a midday news conference.

“We have not lessened in any of our resolve for actions. We are going to work intensely on these items of action. We can’t vote on them totally, but clarify them, get them more intensely canonically well, so that Rome will see that. We’re going to keep pushing and moving until we get to a point where they become action,” he said.

“We are ourselves not happy about this,” he continued. “We are working very hard to move to action. We are just at a bump in the road.” 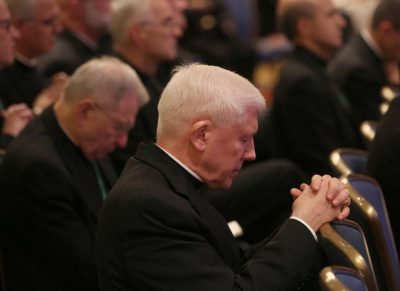 Prelates, including Toledo Bishop Daniel Thomas, pray before the Blessed Sacrament in the chapel during a day of prayer Nov. 12 at the fall general assembly of the U.S. Conference of Catholic Bishops in Baltimore. (CNS photo/Bob Roller)

The request from the Vatican congregation was outlined in a letter received the weekend before the assembly opened. It cited two reasons for seeking the delay, according to the cardinal.

He said the congregation wanted the bishops to wait until after the upcoming February meeting of the presidents of bishops’ conferences from around the world called by Pope Francis to address clergy sex abuse and the need to ensure that the proposals are in line with canon law.

Under questioning, he clarified that the letter expressed the need for “further precision” of the proposals under canon law.

Citing the universal nature of the Catholic Church, he also said that the U.S. bishops cannot act unilaterally to enact standards unless they comply with canon law.

The cardinal stressed that he planned to press the need for the proposals to improve bishops’ accountability when he represents the U.S. bishops at the February gathering.

Until Cardinal DiNardo announced that no vote would be taken on the proposals as the bishops opened their fall general assembly in Baltimore, none of the bishops were aware of the Vatican’s concerns, Bishop Christopher J. Coyne of Burlington, Vermont, chairman of the USCCB Committee on Communications,

“It has thrown us a little bit sideways because it was completely unexpected,” Bishop Coyne said of the Vatican correspondence.

Nevertheless, he explained to reporters, the bishops “by nature are collegial” and “do not work in separate entities” when adopting standards under canon law.

Cardinal DiNardo said he did not know if the congregation’s letters originated with Pope Francis. He said that during a meeting with the pope in October in Rome, the pontiff expressed interest in the direction the U.S. church was taking.

The cardinal repeated several times that the bishops were committed to implementing the proposals despite the setback. “The bishops are all of one mind on this,” he said.

Acknowledging that some parishioners would be “quite angry” that no action was to be taken during the fall assembly, he said that it will show each bishop what it means to be a “local shepherd.”

“You always want to keep giving people a sense of hope,” Cardinal DiNardo added. “We need a living sense of hope right now and I think the church can grant it even through the shepherds but even through our good and wonderful people who are moving along.”

The cardinal cited the history of the “Charter for the Protection of Children and Young People” as an example of how the church works. When the charter was proposed and was sent to the Vatican for review in 2002, it met with some “reticence,” but that 16 years later “nowadays that is universal around the world.”

“What I find within our Catholic faith sometimes it takes maybe a little longer than we would even like. But the net effect, because we are a universal church, is that you can get things done that are really fine,” he said. “I’m hoping myself that what we are doing now, whatever it might be, with some of the he bumps in the road, that this will eventually work out. I don’t think that’s Pollyannaish.”

The call for action resonated in at least one province of bishops. As the bishops were in the midst of their day of prayer and reflection on their response to abuse, the bishops of Missouri made public a letter and statement sent to the chairman of the USCCB Committee for the Children and Young People.

The letter and accompanying statement to Bishop Timothy L. Doherty of Lafayette, Indiana, committee chairman, said that while the bishops support some of the proposed actions from the Administrative Committee, they hoped the USCCB would address the “abuse of power that is at the center of the sexual abuse scandal of our church.”

Among several steps, the Missouri bishops called for abuse survivors to be at the center of the church’s response to the crisis; strengthen the 2002 charter; have each bishop mandate that the charter apply to each religious order serving in their diocese; and better utilize the charisms of the laity.

NEXT: Kentucky nonprofit recruits ‘water women’ in bid to rid Haiti of cholera