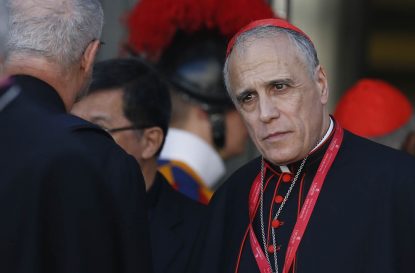 Cardinal Daniel N. DiNardo of Galveston-Houston, president of the U.S. Conference of Catholic Bishops, leaves a session of the Synod of Bishops on young people, the faith and vocational discernment at the Vatican in this Oct. 18, 2018, file photo. (CNS photo/Paul Haring)

“In these stories, CBS alleges that the Archdiocese of Galveston-Houston has allowed priests who have been ‘credibly accused’ of sexual abuse against a minor to continue their ministry as priests,” said the cardinal, who is president of the U.S. Conference of Catholic Bishops.

“The archdiocese responded to over 30 questions submitted to it by CBS News this past weekend, only to see almost all of our responses completely ignored by the CBS team,” he added in a statement released late Nov. 21.

In a story that aired Nov. 20, CBS News reported on allegations made against Fathers Terence Brinkman and John Keller, who are in active ministry in Houston.

In his statement, Cardinal DiNardo confirmed the two priests each had had an accusation of abuse lodged against them, which they both denied, he said. The respective incidents occurred decades ago, the cardinal said, and a lay board reviewed them and concluded the priests should stay in ministry.

“Each accusation was reviewed by the archdiocesan lay review board who recommended that both priests be allowed to minister,” he continued. “These are the only accusations made against either priest, who have each served more than 40 years in the archdiocese.”

CBS News interviewed a man named John LaBonte, who said that in 2002 he spoke to archdiocesan officials about Father Keller, who LaBonte said had “fondled” him during an overnight parish trip when LaBonte was 16.

LaBonte told CBS he felt it was his “duty as a Catholic” to talk about what he said happened to him.

The archdiocese supplied CBS with a letter saying Father Keller had acknowledged holding LaBonte in an “inappropriate manner for a priest” but he denied there was any “sexual intent.”

Regarding Father Brinkman, an alleged victim gave a sworn statement that in the 1970s said the priest “sodomized me.” In a statement to CBS, Father Brinkman said he cannot say “these events did not take place … but I was not the person who did them to him.” The archdiocese said the victim “provided a physical description that does not match Father Brinkman.”

CBS News in its report did quote a statement from Cardinal DiNardo, who has headed the archdiocese since 2006. “I want to assure my brothers and sisters in Christ that we are cooperating, and will cooperate, fully with any investigation involving possible abuse,” he said. “While the church as a whole has made important strides especially since 2002 in addressing this evil, we still have important work to do. We can, and will, do better.”

Cardinal DiNardo’s Nov. 21 statement on the CBS News coverage included a comment from the archdiocese pointing out that before the bishops’ Nov. 12-14 fall assembly in Baltimore, the cardinal had spent much of the last two months in Rome attending the Synod of Bishops and “otherwise working with the top leadership urging action on the abuse scandal.”

In an interview with Catholic News Service in Rome Oct. 22, Cardinal DiNardo said that while the clerical sexual abuse crisis did not dominate discussions at the synod of Bishops, it was discussed and that everyone in the room clearly believed the crisis has to be dealt with.

Cardinal DiNardo and Archbishop Jose H. Gomez of Los Angeles, USCCB conference vice president, who also was in Rome for the synod, met privately with Pope Francis Oct. 8 to discuss the handling of years of allegations of sexual misconduct by former Cardinal Theodore E. McCarrick of Washington.

Also in early October, Cardinal DiNardo and the other Texas bishops announced they will release a comprehensive list of those priests who have been “credibly accused of sexually abusing minors by the end of this coming January.”

The Galveston-Houston Archdiocese said it has engaged “a nationally respected outside expert to help compile and validate this critically important list. This archdiocese takes every allegation seriously and is fully cooperating — and will cooperate — with any and all investigations related to it.”

Across the country in the Diocese of Buffalo, New York, Bishop Richard J. Malone Nov. 21 took a local TV investigative team to task for its coverage of a couple of abuse cases in his previous diocese, the Diocese of Portland, Maine, which he headed from 2004 to 2013. The TV reports accused him of a cover-up; both priests were eventually allowed to minister with restrictions after claims made against them were not proven.

One case involved Father Paul E. Coughlin, who was suspended for befriending a violent sex offender and allowing him to live in the parish rectory at St. John the Evangelist Church in South Portland. The other involved Father Thomas M. Lee, who was accused of sexual abuse dating back decades; the allegations came to light in the early 2000s.

“I sought and obtained Father Coughlin’s resignation from ministry, but canon law required I review his case periodically,” Bishop Malone stated. “After three years, I allowed him to resume some priestly duties — saying Mass in convent chapels and filling in at weekend Masses. There was a significant outcry to this decision so I re-evaluated my decision and restricted his ministry.”

In the case of Father Lee, he said, when a tribunal determined “the allegations were not proven, I supported an appeal. When a second tribunal reached the same conclusion, no further appeal was possible.

“Nevertheless,” Bishop Malone added, “I continued the restrictions on his ministry. I know some were critical of the canonical process because they did not like the result. It’s no different than when people become frustrated with our justice system if they do not like the verdict. But the verdict stands.”

The canonical process in each priest’s case “was scrupulously followed during my time as bishop in Portland, Maine. For anyone to imply that there was any sort of cover-up in either case is patently false. We were transparent, issuing press releases and letters to the faithful throughout both investigations.”

PREVIOUS: Catholic, other faiths pledge solidarity for all seeking asylum in U.S.