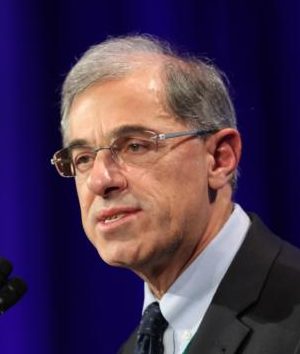 BALTIMORE (CNS) — The U.S. bishops gave a standing ovation Nov. 13 to Francesco Cesareo, chairman of the National Review Board, for his report on the widening abuse crisis in the church and his calls for more action from them to address the abuse.

Cesareo, board chairman since 2013, called for broadening the scope of the “Charter on the Protection of Children and Young People” to include bishops. He also urged publishing complete lists of credibly accused clergy in all dioceses; improving the audit process; and enhancing accountability for bishops regarding cases of abuse.He urged the bishops to take action and continue to move solutions to abuse forward. “Don’t stagnate it, or slow it down,” said Cesareo during a question-and-answer period following his report. “If that does not happen, I fear for the future of our church.”

Cesareo’s report came at the beginning of the second day of the annual fall assembly of the U.S. Conference of Catholic Bishops in Baltimore. The day’s agenda included discussion of proposals for addressing the abuse crisis but items that a day earlier the Vatican asked they delay voting on.

The bishops were scheduled to hear remarks from Heather Banis, victims assistance coordinate for the Archdiocese of Los Angeles, and to devote much of the afternoon of Nov. 13 to an open discussion of the crisis.

During the morning session, a proposed pastoral letter on racism, “Open Wide Our Hearts: The Enduring Call to Love — A Pastoral Letter Against Racism,” was introduced by Archbishop Gustavo Garcia-Siller of San Antonio, chairman of the Committee on Cultural Diversity in the Church.

The pastoral was prepared in consultation and collaboration of several committees: the cultural diversity committee; the Ad Hoc Committee Against Racism, chaired by Bishop Sheldon J. Fabre of Houma-Thibodaux, Louisiana; and all the other standing USCCB committees.

“Despite many promising strides made in our country, the ugly cancer of racism still infects our nation,” the proposed pastoral says. A vote to approve it was scheduled for Nov. 14, the last day of the public sessions of the fall assembly.

After the meeting opened Nov. 12, Cardinal Daniel N. DiNardo of Galveston-Houston, USCCB president, announced that the Vatican had requested the bishops not to vote on the action items. The request came from the Vatican Congregation for Bishops.

The reasons given for the delay were Pope Francis’ planned meeting in February with the presidents of bishops’ conferences worldwide to deal with clergy sex abuse, and to be sure that the proposals being considered by the bishops conform to canon law.

In Rome in response to questions about the request the bishops delay voting, Catholic News Service was told the Congregation for Bishops “is working to ensure the best evaluation and accompaniment of the questions raised by the American episcopacy.” Father Massimo Cassola replied to CNS on behalf of Cardinal Marc Ouellet, prefect of the congregation.

In Baltimore, after Cardinal DiNardo’s announcement, Cardinal Blase J. Cupich of Chicago stood from the meeting floor to call for the bishops to hold a special assembly in March to weigh and vote on the measures after being informed by the outcome of the February meeting in Rome.

In his presidential address to the USCCB Nov. 12, Cardinal DiNardo took note of the historic nature of the meeting.

Most of the first day of the assembly was set aside for prayer and reflection by the bishops in a makeshift chapel at the Baltimore Marriott Waterfront.

During that time, they heard from two victim-survivors what they have endured: Luis A. Torres Jr. Teresa Pitt Green. Neither was accusatory in tone, rather their declarations were given calmly. Both painfully painted the landscape that has brought the Catholic Church in the United States to address the sex abuse crisis so urgently.

Two other reflections from a woman religious and a laywoman addressed what the laity need from the bishops and how bishops can be ministers of healing.

The day ended with celebration of Mass in the makeshift chapel. In his homily, Archbishop Bernard A. Hebda of St. Paul and Minneapolis urged his brother bishops to give their all to addressing the abuse crisis and show a commitment to change what needs to be changed to put an end to any abuse.

He said the bishops need to avoid factionalism in the work need to address abuse and promote unity with the whole church.

“We need to be bold, we need to be decisive, but we need to do that in a way that serves the unity of the church, not only with the See of Rome but also within the church in the United States,” Archbishop Hebda said.

Other business the bishops had on their agenda for the meeting sessions ahead included a number of action items, other than the abuse protocols they will now delay voting on.

— The endorsement of the sainthood cause of Sister Thea Bowman, the great-granddaughter of slaves and the only African-American member of the Franciscan Sisters of Perpetual Adoration, who transcended racism to leave a lasting mark on Catholic life in the United States in the late 20th century.

Outside the hotel, protesters continud to gather to call for change and urge action by the bishops to address the widening the sex abuse crisis.

Contributing to this story were Dennis Sadowski, Carol Zimmermann, Rhina Guidos and Mark Pattison in Baltimore and Cindy Wooden in Rome.

PREVIOUS: Minnesota bishop calls for ‘the strength to come clean’ on abuse