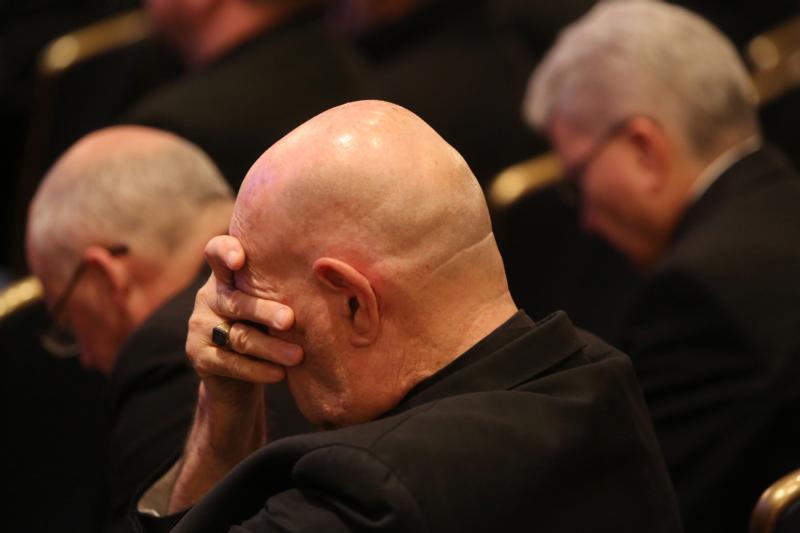 Prelates pray before the Blessed Sacrament in the chapel during a day of prayer Nov. 12 at the fall general assembly of the U.S. Conference of Catholic Bishops in Baltimore. (CNS photo/Bob Roller)

BALTIMORE (CNS) — Seasoned bishop watchers know that just about every fall meeting of the U.S. Conference of Catholic Bishops has a surprise. Sometimes it’s an election result. Sometimes it is the debate you never expected. Sometimes it’s that there’s no debate.

But the first day of the 2018 fall meeting was one that caught just about everyone in the room flat-footed. Right on the eve of what looked to be a decisive meeting of the U.S. bishops in dealing with sexual abuse within their own ranks, the Vatican’s Congregation for Bishops asked them not to vote on two of the key proposals that were to be put before them.

When Cardinal Daniel N. DiNardo of Galveston-Houston, president of the conference, made the announcement within the opening minutes of the meeting, the entire room — bishops, staff and journalists — were gobsmacked.

This, after all, was the meeting when the bishops were going to get their own house in order following the latest wave of sex abuse stories — Archbishop Theodore E. McCarrick, the Pennsylvania grand jury report, and the subsequent flood of subpoenas and investigations and self-published lists of priest offenders.

The McCarrick scandal in particular raised questions about who knew what and when. It also highlighted the fact that even when adults were involved, there could be harassment and abuse of power. In an Aug. 16 statement, Cardinal DiNardo called for “an investigation into the questions surrounding Archbishop McCarrick, an opening of new and confidential channels for reporting complaints against bishops, and advocacy for more effective resolution of future complaints.”

Following meetings in Rome, some of the early requests by the U.S. — particularly for an apostolic visitation to investigate the questions surrounding the McCarrick scandal — were rejected or modified by Rome. Likewise, a request by Pope Francis that the fall meeting become a weeklong retreat for the U.S. bishops was rejected as logistically impractical, and plans were made for such a retreat in January in Chicago.

What is not clear is how much of the discussion and planning by the U.S. bishops involved Rome. By the eve of the November meeting, the U.S. bishops were planning to ask for votes by the entire conference on three key issues:

— A proposal for “Standards of Episcopal Conduct.”

— A proposal to establish a special commission for review of complaints against bishops for violations of the “Standards of Episcopal Conduct.”

— And a protocol regarding restrictions on bishop who were removed from or resigned their office due to sexual abuse of minors, sexual harassment of or misconduct with adults, or grave negligence in office.

In addition, there was to be a report on a third-party reporting system that would allow victims or those knowledgeable of abusive situations regarding bishops to report such cases confidentially.

According to Cardinal DiNardo’s announcement, word was received Nov. 11 that the Vatican was asking the conference to delay their vote because of the previously announced meeting at the Vatican of the presidents of all the world’s bishops’ conferences to discuss the abuse crisis in February.

In his remarks, Cardinal DiNardo expressed his disappointment at this request, which threw the planned agenda for the four-day meeting into disarray.

Theories abound about what happened and why, ranging from the darkly conspiratorial to the surmise that Rome simply did not want the U.S. bishops to get too far ahead of the Vatican on the very sensitive issues involving the disciplining of bishops. Such discipline in church law is normally the prerogative of the pope himself.

One observer said that the U.S. bishops’ sense of urgency — inspired in part by the anger of many lay Catholics and their priests — clashed with the more cautious way that Rome would approach any issue with such far-reaching implications.

What will be the implications of this sudden twist is still unknown. Protesters and bishops alike may now see Rome as the obstructionist, and the growing pressure on Pope Francis will continue. Ironically, this may take some heat off the U.S. bishops, at least temporarily, but is unlikely to help Rome-U.S. relations.

Critics of the proposed action items also may be relieved, since there were those who viewed the proposals as opening the door for other conferences to make similarly unilateral changes in areas of discipline or doctrine.

Perhaps most frustrated are those bishops — many of them appointees after 2002 — who want to open their archives, name priests credibly accused, and forthrightly address issues of accountability and transparency.

Following the announcement of the delay, the bishops of the Missouri province released a letter originally written Oct. 6. It expressed support for the proposals suggested by Cardinal DiNardo but added: “We fear these measures will not be enough in either substance or timeliness to meet the demands that this pastoral crisis presents.”

Delay is inevitable, however. And now the bishops have the rest of their meeting to decide what, if anything, they are still able to do.

PREVIOUS: Review board chair fears for church future if more action not taken on abuse