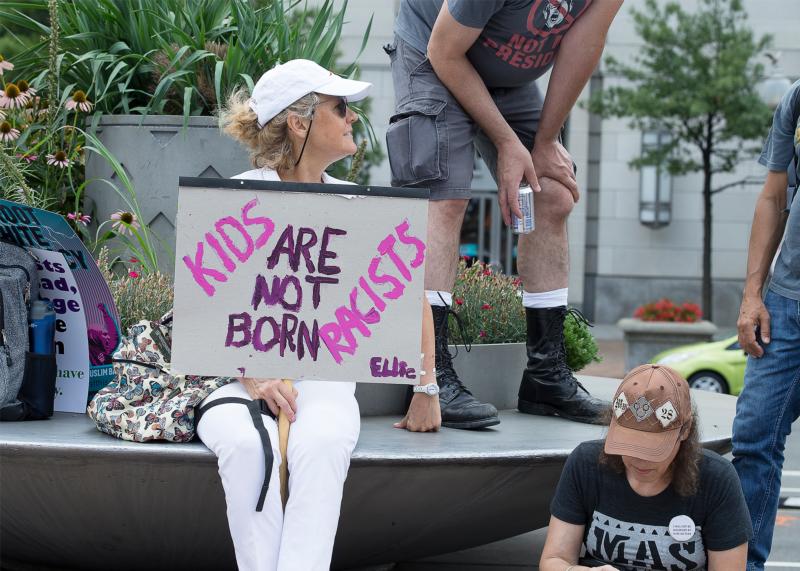 A person holds an anti-racism poster at Freedom Plaza Aug. 12 in Washington prior to the start of the white nationalists’ rally “Unite the Right 2” in nearby Lafayette Square. (CNS photo/Tyler Orsburn)

WASHINGTON (CNS) — During discussion at their Baltimore assembly on the U.S. bishops’ new pastoral letter, “The Enduring Call to Love: A Pastoral Letter Against Racism,” Bishop Robert J. Baker of Birmingham, Alabama, said the document’s message was needed, as the civil rights movement “began 60 years ago and we’re still working on achieving the goals in this document.”

If there is any evidence needed of that, one need only hear the stories told at listening sessions sponsored earlier this year by the U.S. bishops’ Ad Hoc Committee Against Racism, which drafted the pastoral letter.

It is disturbing enough that racism has existed and persisted within American society for centuries, but many of the tales told at the listening sessions involved racism within the Catholic Church.

At such a session in St. Louis, stories poured out.

A student at a Catholic high school was denied the right to ask for prayers for Michael Brown, an African-American young man slain by a white police office in nearby Ferguson, Missouri, in 2014. The student was told that unborn lives were more of a priority during Respect Life Week.

At one Catholic high school, Black History Month was not celebrated, and a student said she was rebuffed when she asked about it, adding she felt the school treated her differently afterward.

A teacher who moved closer to her job at a historically black college said that at her first Mass at her new parish, the priest denied her Communion, asking her instead, “What do you want?”

An archdiocesan employee, who complained about the lack of African-American elements in the liturgy, said a priest used the phrase “a bunch of monkeys” when speaking to her about it.

At a listening session in St. Petersburg, Florida, one speaker talked about waiting to go to confession, while two people on either side of him talked to each other. One asked, “What do you think of the Black Lives Matter movement?” The other replied, “Yeah, they don’t matter.”

A graduate of the diocese’s lay pastoral ministry institute said that when he has asked priests to preach on the church’s social teaching, he’s heard the reply that it is “liberation theology.”

Participants at a listening session in the Diocese of Brooklyn, New York, said the public’s image of the diocese “does not express who our diocese is,” said the representative of one group that met during the session. “We are not the exception. We are part of the diocese. And many ethnic groups are made to feel that they are the exception, not the real diocese.”

The group said the faces seen in print in The Tablet, the diocesan newspaper, are mostly white and that the newspaper presumes most children attend Catholic school. This group called for more diversity in the pages, and more publicity for parish faith formation programs and the public school children attending them.

Another group put forth its stance that they have “seen an increase of endorsements and support of the Trump administration in The Tablet,” claiming The Tablet had “encouraged parishioners to vote for (Donald) Trump because of a single pro-life issue.”

Some stories stretched back generations. A black woman at the St. Petersburg listening session recalled being at a pre-Cana service at a largely white parish in New Orleans 56 years ago. Before it was over, the police had been called to the church because of the presence of blacks.

At the Brooklyn listening session, older area residents recalled pastors who would not admit black families to their parishes and schools years ago, and crosses being burned in the yards of black families in the 1970s and early ’80s. One participant, Glenda Spencer, said her family’s house was burned and bombed when they moved to the Rosedale neighborhood in 1974.

Contributing to this story was Marie Elena Giossi in Brooklyn.

NEXT: Bishop calls for greater lay role in church, including abuse probes