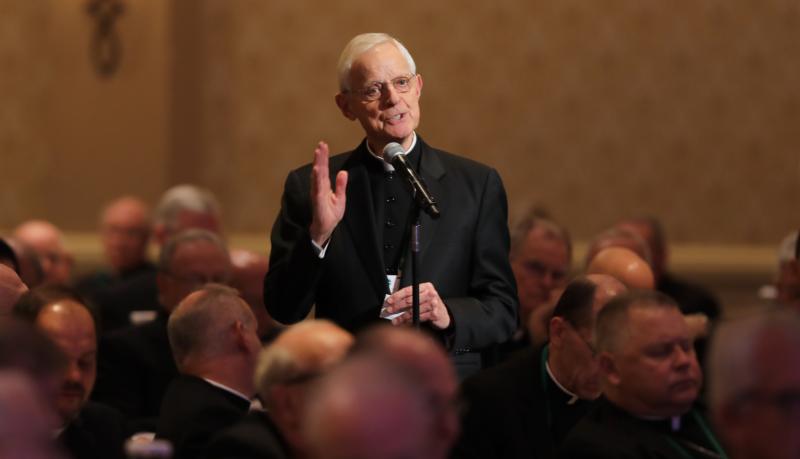 Cardinal Donald W. Wuerl, apostolic administrator of the Washington Archdiocese, speaks from the floor Nov. 13 at the fall general assembly of the U.S. Conference of Catholic Bishops in Baltimore. (CNS photo/Bob Roller)

WASHINGTON (CNS) — As in 2002, facing the abuse crisis offers a moment of purification for the U.S. Catholic Church, and the solution must involve transparency and accountability, Cardinal Donald W. Wuerl said during a Nov. 13 session of the fall meeting of the U.S. Conference of Catholic Bishops in Baltimore.

The cardinal, who is apostolic administrator of the Archdiocese of Washington, commended a special report from the National Review Board on the crisis presented by the board’s chairman, Francesco Cesareo, and the report’s call for transparency and accountability.

The cardinal noted that when the nation’s bishops confronted the abuse crisis in 2002, “I remember Pope, now St. John Paul II, saying that this was a moment of purification, this was the time to begin a profound purification, and not just personal but institutional.”

Recognizing the need for purification provided a frame of reference for addressing the abuse crisis then and now, Cardinal Wuerl said.

The cardinal noted that the National Review Board report emphasized the need for transparency.

Accountability also is essential in addressing the crisis, the cardinal said.

“We have come a long way since 2002 but we still have some way to go,” he said, adding that accountability should entail “taking the responsibility personally, but also institutionally, for breakdowns, for failures.”

Cardinal Wuerl noted that the bishops’ meeting offered an example of different members of the church working together to face the issue.

“We had laypeople, we had religious, we had priests, we had bishops, all of us addressing this. But I think one of the things that perhaps brought some cohesion … was the constant theme of our unity, that we are a communion,” the cardinal said, who emphasized the need for unity with the pope in confronting the abuse crisis.

“We are a church rooted in our faith, rooted in the Spirit and somehow that community, that communion, that unity centered in Peter and flowing from the work of all of us — always with and never without (that unity) — but also experiencing our own responsibility, seems to me to be a pathway forward,” he said.

Repeating that this is a time of purification for the church, Cardinal Wuerl concluded his intervention by saying, “Sometimes we simply have to take personal responsibility; we simply have to say, ‘This needs to be done.'”

He added, “Institutionally it is easier, personally it is where that purification has to be a part of the entire process.”

After the report was issued, Cardinal Wuerl defended his child protection efforts and expressed sorrow and acknowledged the need for healing for victims who had been abused and for the community of Catholic faithful wounded by the abuse crisis, and he expressed hope that his resignation would help the people of the Archdiocese of Washington “focus on healing and the future.”

Zimmermann is the editor of the Catholic Standard, newspaper of the Archdiocese of Washington.

PREVIOUS: Army of volunteers provides turkey, all the trimmings for those in need

NEXT: In Facebook Live event, U.S. bishops field range of questions from public