Army of volunteers provides turkey, all the trimmings for those in need 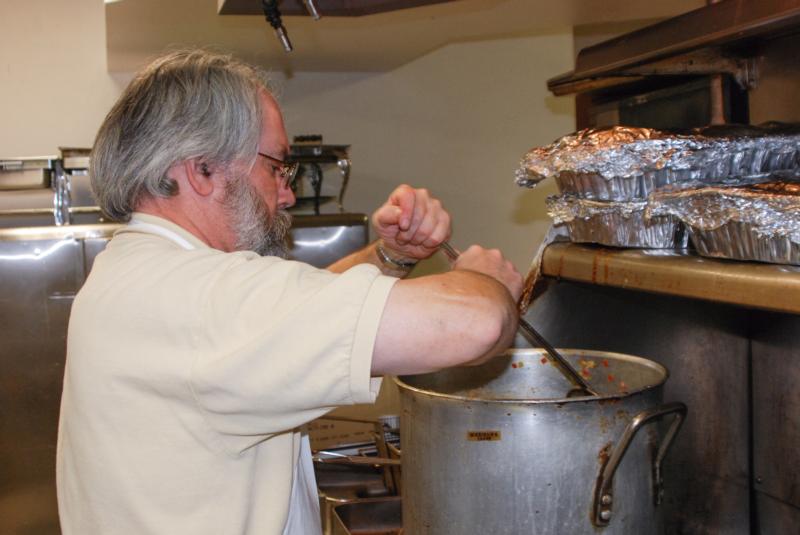 Art Gamotis, a member of the Edward Douglass White Knights of Columbus Council in Arlington, Va., stirs a pot at the annual Thanksgiving dinner at the council’s home in Arlington, Va., in 2009. For the past 34 years, the Knights council, has hosted Thanksgiving for folks in the community who might need a little help or a little company. (CNS photo/Arlington Catholic Herald files)

ARLINGTON, Va. (CNS) — Picture the first Thanksgiving: a community coming together, one person bringing the fowl, another the bread, others sharing the fruits of their harvest, all gathering for a meal. The gratitude palpable for a plentiful harvest, for family and friends, for the opportunity to rest, reflect and break bread with others.

For the past 34 years, the Edward Douglass White Knights of Columbus Council in Arlington has hosted Thanksgiving for folks in the community who might need a little help or a little company.

Similar to an Amish barn-raising, the community comes together to provide turkey and all the trimmings, but with a side of organizing buses to pick up the dinner guests, gathering donated paper products and vegetables, and scheduling an army of volunteers to cook, carve and carry the meals to the homebound.

What started with a handful of turkeys and 200 recipients has grown to feeding 2,500 with any number of donated turkeys. Marijo Galvin, Thanksgiving coordinator with her husband, Thom, says “any number” because they never know how many turkeys will show up.

For their 11th year overseeing the effort, they expect about 200 turkeys — fully cooked, unstuffed and at least 20 pounds — to be dropped off at the council home in Arlington from Nov. 19 through Nov. 21. A team of carvers will pull the birds from the huge walk-in freezers and start their work in the wee hours of Thanksgiving morning.

Only between 200 and 300 diners will come to the council home for the afternoon meal. Hundreds of other meals will be delivered by a team of volunteers. Marijo said a former postal worker has arranged the deliveries by location to facilitate the process. The first delivery goes out at 9 a.m.

Runners, another vital team, will pick up the elderly or disabled and bring them to the council home for the big feast, often eating with them, and then driving them home a couple of hours later.

Marijo mentions some of the key players in the community who support this huge effort, including Bishop O’Connell High School in Arlington, which donates use of its school buses, and the Jhoon Rhee martial arts school, which frees up its vans, and other bus companies that bring guests from two locations in the Arlington Street People’s Assistance Network and from a nearby neighborhood.

St. Agnes Church in Arlington is on pie duty this year. Ruth Foster, the volunteer coordinator or “Pie Lady,” said she ordered 225 pie tins and an equal number of shallow and deep pie boxes. The tins have been sitting on a table in the narthex of the church waiting for volunteer bakers.

Her goal is to get at least 150 pies back, 120 earmarked for the Knights’ Thanksgiving dinner and 30 for Christ House, an outreach for people in need.

When people tell her that they’ve never made a pie, she tells them to “go to the store, pick up the refrigerated dough, roll it out, follow the directions, make up the stuff, put it in the oven and wait until it comes out.”

Ruth’s favorite is pecan pie. Her secret? “The key to a pecan pie is the temperature at which you cook it. It’s a longer process, slower, at a lower temperature.” She likens the filling to a custard. “When the center sets up, it’s done.”

The night before Thanksgiving, Marijo, her husband and two other volunteers go to a local German bakery, Heidelberg Pastry Shoppe in Arlington, to pick up any leftovers, usually breads, pies and desserts. Marijo joked that she thinks the owner bakes too much so they have enough to donate to the Knights.

“Back in the day, the entire community jumped in and tried to do something,” said Marijo. That’s where the scene of that first Thanksgiving, legend or legit, calls to mind a spirit of giving and gratefulness.

Marijo said financial donations are also needed to offset the costs of the endeavor, which include the rental of food warmers, and the side dishes, aka the trimmings.

The day wraps up as the pie crumbs are swept from the floor about 6 p.m. Any food leftovers are shared with several local shelters.

Marijo is undaunted at the task ahead. “I love the people. I love talking to the people. They are grateful, but they don’t understand how grateful I am to them for the joy the give me.”

She added quickly, “It helps you remember how lucky you are.”

Augherton is managing editor of the Arlington Catholic Herald, newspaper of the Diocese of Arlington.

PREVIOUS: Summer’s Encuentro a ‘balm for the wounded,’ says archbishop