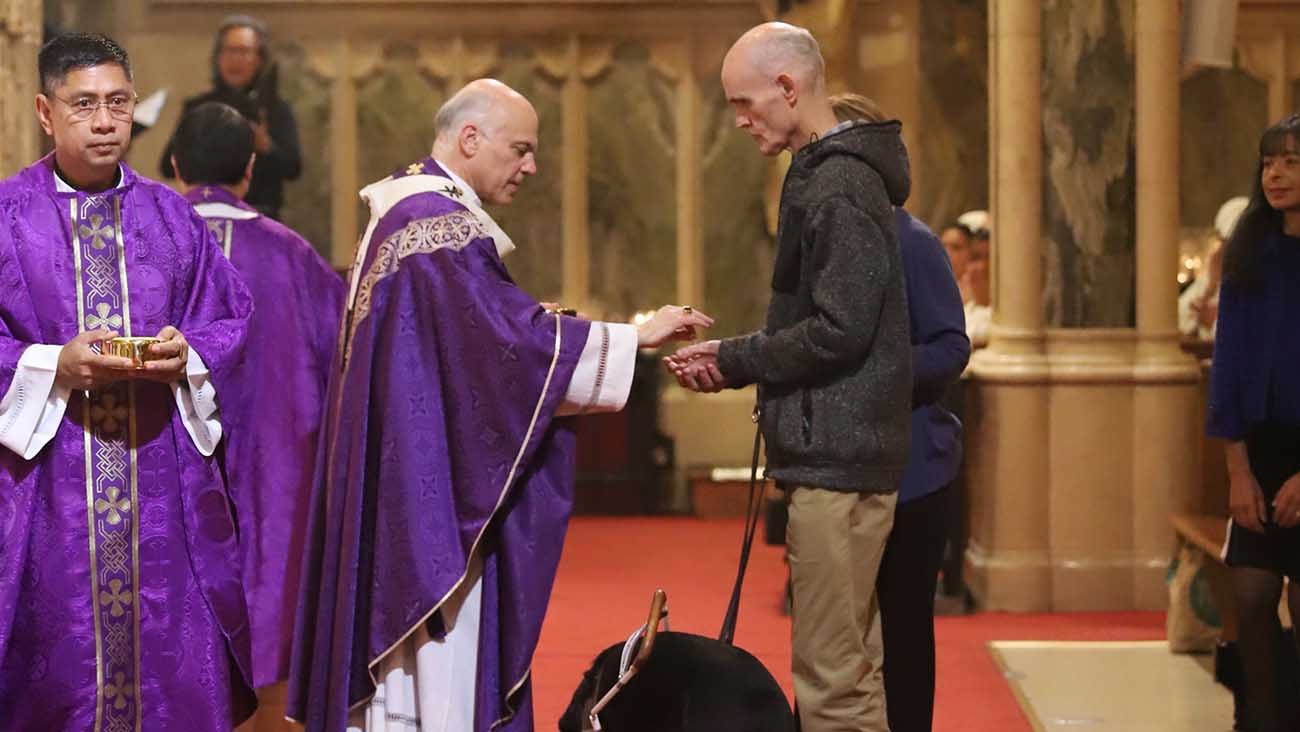 SAN FRANCISCO (CNS) — In the heart of a city becoming as well known for the size of its homeless population as it is for its golden-hued bridge, about 200 people gathered at St. Patrick Church Nov. 8 to pray for the eternal rest of the human lives ended unceremoniously on the streets of San Francisco.

Students from Sacred Heart Cathedral Preparatory High School, ICA Cristo Rey, St. Ignatius College Preparatory High School and Archbishop Riordan High School flanked the doors and walked the aisles of the Mission Street church handing out programs and “Our Lady of the Streets” holy cards in advance of the archdiocese’s “Requiem Mass of the Dead for Our Homeless Brethren.”

The Mass was organized by the Archdiocese of San Francisco’s Office of Human Life and Dignity. Archbishop Salvatore J. Cordileone was the principal celebrant.

“The Catholic Church believes one of the greatest acts of charity we can perform is to pray for the eternal salvation of those who have gone before us,” said Martin Ford, social action coordinator for the office and organizer of the first-time Mass.

There are some 2,100 chronically homeless people on the streets of San Francisco, although the total number of homeless including families or individuals living in cars, tents or parks is estimated to be as high as 7,500, organizers said, citing a 2017 homeless census and survey.

Mortality is four to nine times higher among chronically homeless people whose life expectancy is 25 years shorter than among the general population.

Archbishop Cordileone noted autumn’s signal of “things coming to an end” and the passage into the “silence of winter,” as a reminder of the silence of death and the fleeting nature of human life.

In his homily, he elaborated on St. Paul’s comparison of the human body to an “earthly tent” in the first reading (2 Corinthians 5: 1, 6-10), calling the homeless “a symbol, a sort of sacrament of the spiritual state of every one of us.”

A tent is a temporary dwelling, a sort of a makeshift dwelling, he said, and “this is a disturbingly accurate description of those who have died in the streets.”

Missionaries of Charity, the religious order founded by St. Teresa of Kolkata to serve “the poorest of the poor,” led the singing with the Benedict XVI Institute choir.

At a reception following the Mass, Spencer and Rachel Christiansen, members of Star of the Sea Parish, cradled their three sleeping children while they told Catholic San Francisco they came to pray for a college friend, Michael Cunningham, who died under a freeway underpass in Marin County a few years ago.

“I am a native San Franciscan, so I’ve always been very familiar and close to the problem,” Spencer told the archdiocesan newspaper.

“It’s been hard bringing three kids tonight but we are offering it up,” he said. “The homeless need rest and I hope that they will pray for me as well.”

Eric Jackson, a St. Dominic parishioner, said he prayed that “all those who had no home here on earth be welcomed into their eternal home, the mansion that has been prepared for them.”

NEXT: Maryland pilgrims walk 50 miles ‘in penance and prayer’ for priesthood