Maryland pilgrims walk 50 miles ‘in penance and prayer’ for priesthood 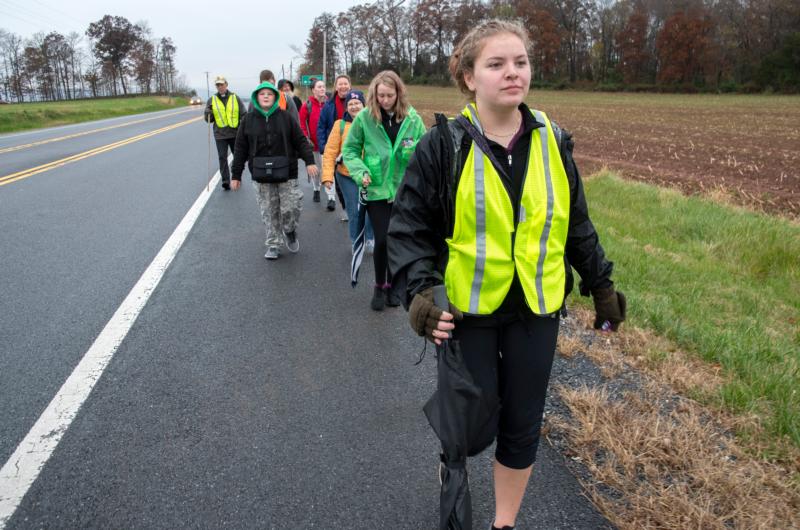 Monica Rubeling, 16, of St. Peter the Apostle in Libertytown, Md., walks the “Fifty Miles in Faith: Pilgrimage-Walk for the Priesthood in Penance and Prayer” Nov. 9. Her brothers include two studying for the priesthood and Father Michael Rubeling, associate pastor of St. John the Evangelist in Severna Park, Md. (CNS photo/Kevin J. Parks, Catholic Review)

The 54-year-old parishioner of St. Peter the Apostle in Libertytown was among 19 hardy souls who set out Nov. 9 for a three-day trek on foot from Emmitsburg to Baltimore, dubbed “Fifty Miles in Faith: Pilgrimage-Walk for the Priesthood in Penance and Prayer.”

It began with a Mass at St. Joseph in Emmitsburg and ended with another Mass Nov. 11 at the Basilica of the National Shrine of the Assumption of the Blessed Virgin Mary in Baltimore.

Pilgrims arrived the day in Baltimore before the U.S. Conference of Catholic Bishops opened its fall assembly there Nov. 12-14. The clergy sexual abuse crisis, which precipitated the pilgrimage, topped the bishops’ agenda.

Rubeling had to miss the second day of the pilgrimage; she and her husband, Gary, were among those at a Nov. 12 wedding in Montgomery County, with their eldest son, Father Michael Rubeling, as the celebrant. He is associate pastor of St. John the Evangelist in Severna Park.

She had five of her nine other children in tow for the start of the pilgrimage, including Peter, a student at nearby Mount St. Mary’s Seminary, who is serving his pastoral year at St. Mark in Fallston and is expected to join his brother as a priest of the Archdiocese of Baltimore. Another brother, Timothy, recently entered formation with the Capuchin Franciscans.

“As the mother of a priest and a seminarian,” Stephanie Rubeling said, “we need to do whatever we can to help priests and the church to repair the damage done and support those who want to move forward in holiness. Coming out of our comfort zone a little bit is a good thing.

“There is so much negative media. We need to go the extra mile, pardon the pun, in support of priests who are trying to lead holy lives, and remind everyone, there are good things going on in the church,” she told the Catholic Review, the news outlet of the Baltimore Archdiocese.

Pilgrims set out mid-morning in 41-degree temperatures and in a mist forecast to become an afternoon downpour, so ponchos and hand warmers were available, in addition to bottled water.

Their itinerary included overnight stops at St. Batholomew in Manchester and the Church of the Nativity in Timonium. The pilgrimage, averaging 17 miles a day, went through four jurisdictions of the Baltimore Archdiocese, including Frederick, Carroll and Baltimore counties and the city of Baltimore.

It was led by Father John “Jack” Lombardi, pastor of St. Peter in Hancock and St. Patrick in Little Orleans. He also led “Feet for Francis,” a weeklong, 100-mile walk from Baltimore to Philadelphia in September 2015, in conjunction with the archdiocese, to see Pope Francis on his visit to the U.S.

Walkers and support personnel this trek included several veterans of that pilgrimage, including Paul and Paula Tiller of St. Peter in Hancock and Pat and Laura Hamilton of St. Agnes in Catonsville.

“This is a reminder that we’re walking for the Lord, to repair what’s been torn,” Father Lombardi said before setting out toward Main Street in Emmitsburg and east on to Taneytown Pike. “It is our privilege to walk.”

Father Lombardi previously served as chaplain of National Shrine Grotto of Our Lady of Lourdes, another religious landmark in the historic town of Emmitsburg.

Father Armone noted that it was the feast of the dedication of the Basilica of St. John Lateran in Rome, a reminder “to see us as part of something bigger than ourselves. Don’t fall into the trap of American individualism. We are saved. It’s not ‘I am saved.'”

“Any place that has the remains of the first American-born canonized saint is always a good place to begin a pilgrimage, or end one,” said Vincentian Father Martin F. McGeough, pastor. “This was Mother Seton’s parish in Emmitsburg. Her presence here gives it a special aura of sanctity.”