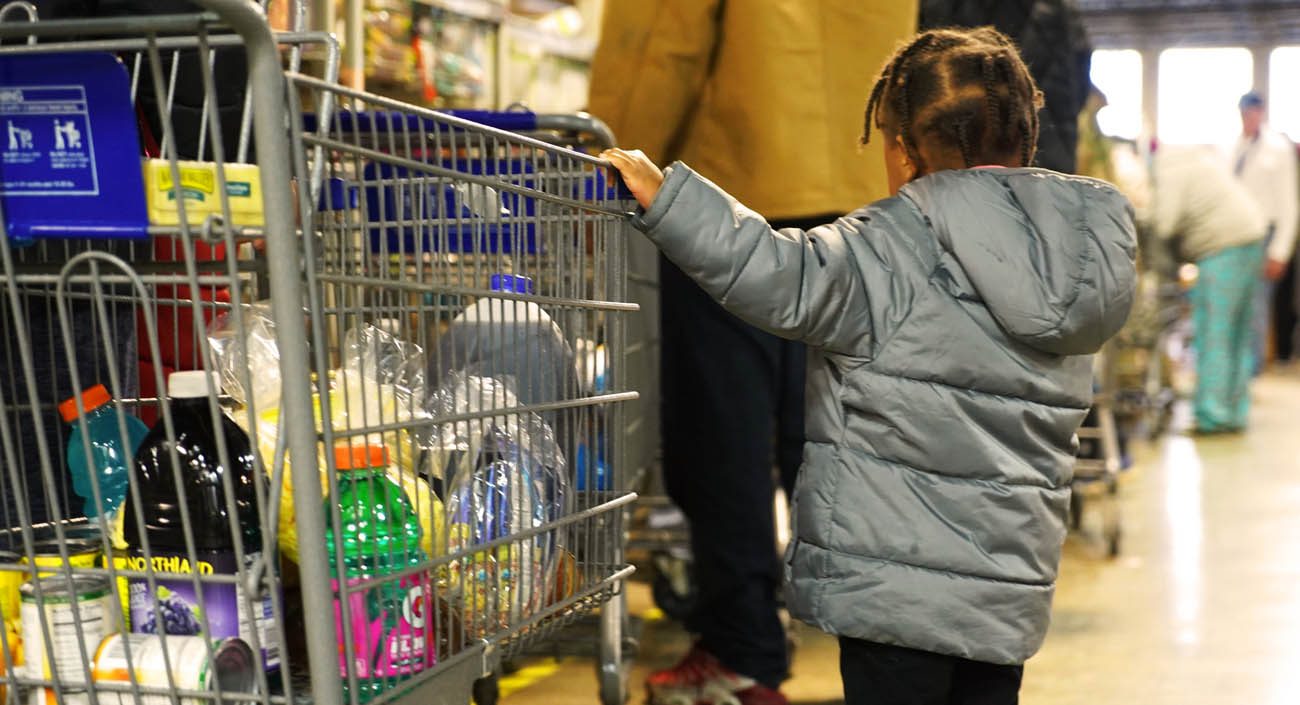 A young girl helps guide a shopping cart Nov. 15 through the food pantry operated by the Indianapolis Council of the Society of St. Vincent de Paul. The Catholic-run pantry serves about 3,000 local families each week. (CNS photo/Katie Rutter)

INDIANAPOLIS (CNS) — Jesus himself might have set the all-time food record when he miraculously served 5,000 men with a few loaves and fish.

In this day and age, however, the Indianapolis Council of the Society of St. Vincent de Paul might hold that title.

The Catholic organization leaders host what they believe to be the largest food pantry in the Midwest, if not in the country, giving out groceries to 3,000 families each week.

A visit to the food pantry during one of their busiest times — the week before Thanksgiving — did not reveal any miraculous loaf-dividing. Rather, the nonprofit showed that the unbelievable becomes possible with a combination of organization, resourcefulness, generosity, sheer volunteer power and faith.

“We always have enough for our clients,” said John Ryan, president of the Indianapolis Council of the Society of St. Vincent de Paul. “Just due to the generosity of our donor base, there’s never been a day when we haven’t had enough food.”

A fine-tuned system ensures efficiency from the entrance all the way back to the parking lot.

Clients check in with a number and that same number is attached to a shopping cart so that they can claim and load their groceries into their car.

Then, they shuffle through a long line of canned goods, boxed food and perishables, selecting their own food according to a point system.

Of utmost importance to Ryan is that clients are able to choose their own food from some 150 different options. 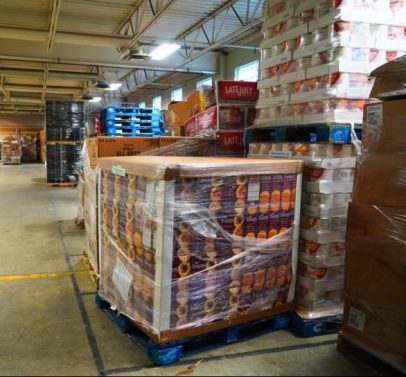 Pallets of food are seen stacked along the walls Nov. 15 in the sprawling back rooms of the food pantry operated by the Indianapolis Council of the Society of St. Vincent de Paul in Indianapolis. (CNS photo/Katie Rutter)

Behind the scenes, the food selections are supplied from a sprawling warehouse. Some rooms are stacked with pallets of canned goods, others are lined with boxes of nonperishables. In one room, saran-wrapped bales of cornflakes stood at least seven-feet high.

Ahead of the Thanksgiving holiday, the Indiana food pantry received 200 frozen turkeys for volunteers to hand out.

“They’ll pick a day, like probably tomorrow morning, and all 200 will fly out the door,” Ryan told Catholic News Service during a November interview at the food pantry, without intending the pun.

The group budgets about $330,000 per year for food purchases, which equals out to roughly $2 per family per week. Yet each family walks away with bags of groceries that would have been $50-$75 to purchase in a store.

The almost-biblical multiplication is possible through a cunning resourcefulness acquired by decades of negotiation and market knowledge.

Occasionally, the organization will be contacted by a trucker whose load was rejected by a grocery store that would otherwise be destined for a landfill.

A core group of about 20 volunteers, mostly retirees, manage the whole operation, putting in hours akin to a full-time job. About 300 additional people come in on a weekly basis. Thousands more volunteer infrequently, including people from schools and business groups looking for service opportunities.

“I think it’s the Holy Spirit at work that draws people, or sends people to our organization, said Ryan, himself a volunteer at the food pantry. “It just happens.”

He estimates that 6,000 donors give to their charitable appeals, which are organized every three months.
The Indianapolis Council of the Society of St. Vincent de Paul also applies for grants to fund large projects, such as the recently completed restroom renovations.

Despite the masses the society serves annually, the group leaders don’t get caught up in the numbers.
Ryan said he fights cynicism by simply understanding poverty and attempting to relate to those caught in it.

“I can cite numbers for you off the top of my head,” he said. “I can tell you that one in seven people in Indianapolis technically live in poverty. I can tell you that a third of them, 35 percent of them, are children.
“The numbers don’t mean anything. You’ve got to look at those people, look them in the eyes, they are as kind and as appreciative and as generous as anybody you’ll meet.”

Ryan firmly asserted that, ultimately, those in poverty simply want hope, and prays that God supplies that gift.

If the literal mountains of food moved by this St. Vincent de Paul council each day are any indication, God is certainly at work among the poor of Indianapolis. Just this time, his disciples don blue jeans and hand out frozen turkeys rather than raw fish. 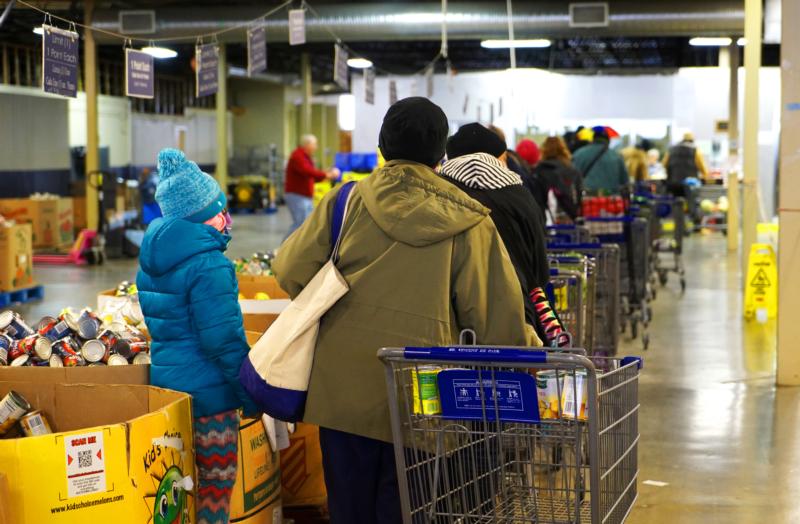 Clients wait in line Nov. 15 as they select food items from the food pantry operated by the Indianapolis Council of the Society of St. Vincent de Paul in Indianapolis. The pantry gives groceries to about 3,000 families each week. (CNS photo/Katie Rutter)