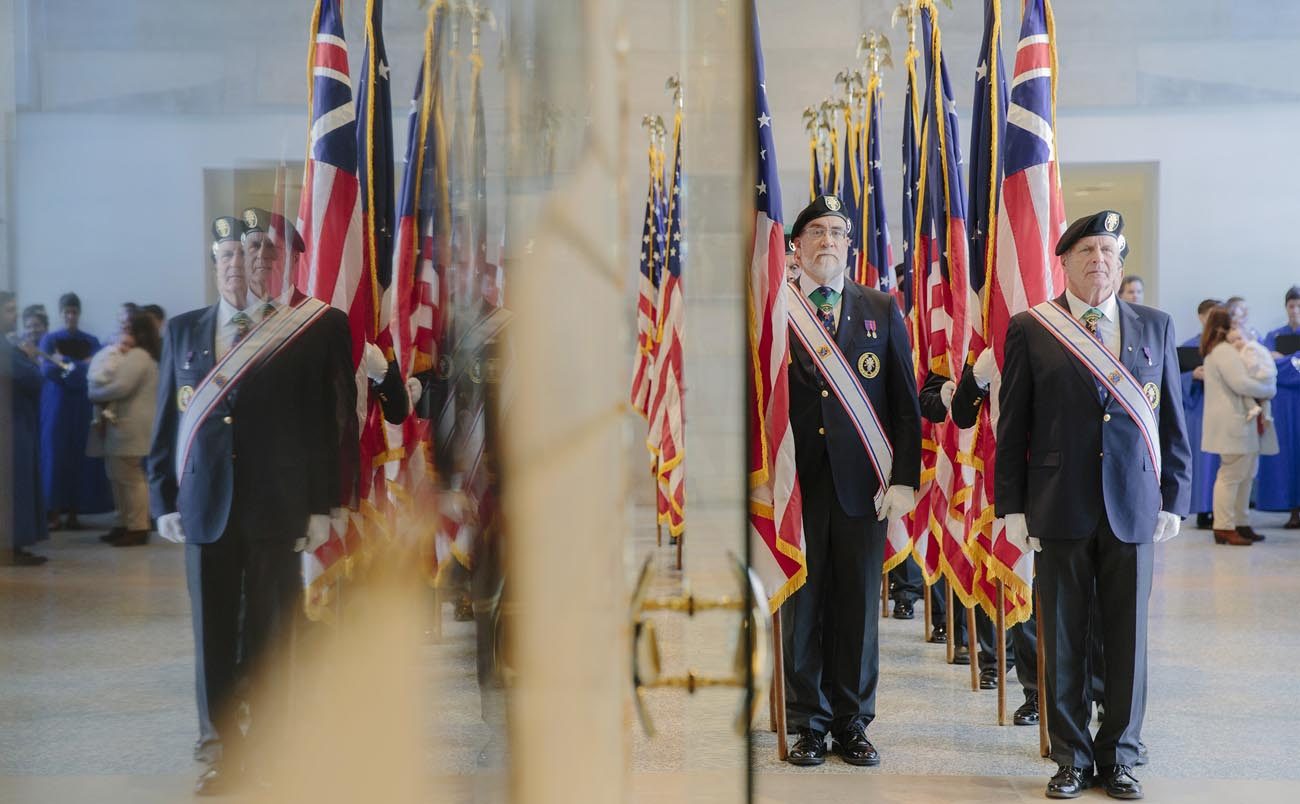 Members of Fourth Degree Knights of Columbus Honor Guard are seen Nov. 11 at the St. John Paul II National Shrine in Washington. The Mass marked the 100th anniversary of the end of World War I. (CNS photo/Jaclyn Lippelmann, Catholic Standard)

WASHINGTON (CNS) — With a solemn Mass, the mournful toll of bells, and patriotic songs and poems, more than 300 gathered at the St. John Paul II National Shrine in Washington on Nov. 11 to mark the 100th anniversary of the end of World War I and to honor those men and women who have served in the armed forces.

“We have gathered not to assign blame, look at causes or rejoice in victory,” said Archbishop Timothy P. Broglio of the U.S. Archdiocese for the Military Services. “We gather to give thanks to those who sacrificed themselves. We also assemble to beg God for lasting peace.”

“We not only look back in gratitude,” he added, “but we look forward to profit from what we celebrate.”

Archbishop Broglio was the homilist at the Mass, and Baltimore Archbishop William E. Lori , supreme chaplain of the Knights of Columbus, was the principal celebrant. The commemoration was held on Veterans Day, the national holiday that was formerly known as Armistice Day in honor of the signing of an armistice on Nov. 11, 1918, that ended World War I.

“The soldiers we honor today risked their lives for a greater value: to end a senseless war,” Archbishop Broglio said. He added all veterans have responded to the call “to defend the weak and support our allies in favor of those freedoms in which we believe.”

In commemorating “the centennial of the armistice,” Archbishop Lori said, “we are commemorating those who gave their lives for freedom. … We pray to our God of mercy and reconciliation for peace.”

Archbishop Broglio said the men and women who serve in the armed forces “go into the midst of conflict in our place. They have a sacrificial willingness to serve a greater good. It is essential we give thanks.”

He also mourned “the tremendous sacrifice of human potential when men fail to settle their differences by other means” than war.

Lt. Gen. Nadja West, the Army surgeon general, was a lector at the Mass. Gold Star mothers Judith Faunce and Mary Wiley — both of whom lost sons in conflict — were gift bearers.

The Mass was offered on what would have been the 44th birthday of Faunce’s son, Capt. Brian Faunce, who was killed in action Sept. 18, 2003. “I thought of him and that I gave birth to him exactly 44 years ago today,” Faunce said. “World War I was supposed to be the war to end all wars, but it wasn’t. Today, I honor all the vets — not only those who died, but also the living.”

Prior to the Mass, the Knights of Columbus and the Archdiocese for the Military Services hosted an armistice centennial commemoration ceremony. It included readings from Catholic poet Joyce Kilmer, best known for the poem “Trees,” but he also was a Knight of Columbus and a soldier killed in WWI.

During the ceremony, Kilmer’s crucifix was displayed, along with helmets worn by “doughboys,” a nickname for U.S. soldiers, who fought in France and the uniform worn by Father John DeValles, a Catholic chaplain known as “The Angel of the Trenches” for his heroic ministry to the injured and dying in that war.

That event also included a ceremonial wreath laying and the tolling of a bell 11 times to mark the 100th anniversary of the end of the war.

“In a world of hatred and bloodshed … the Knights of Columbus had a higher mission — a mission that continues today,” Anderson said. “We continue to believe that our principles are cornerstones for our faith, our communities and our nation.”

At the Mass, Archbishop Broglio reminded those in attendance that “war is the failure of statesmen, but the weight is borne by the armed forces,” and urged the faithful to work for “the promotion of understanding and world peace.”

NEXT: Vatican asks USCCB not to vote on sex abuse response proposals