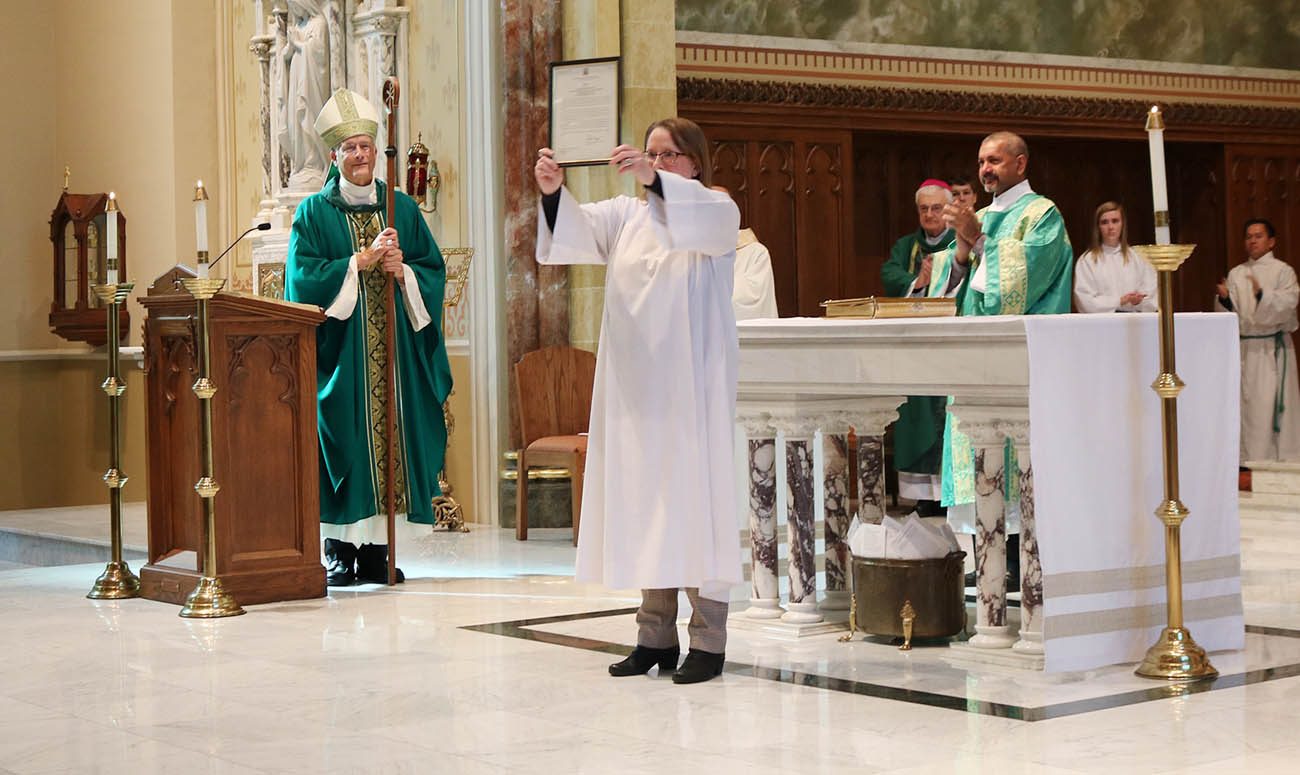 Mary Woodward, diocesan chancellor in Jackson, Miss., displays the edict for the canonization cause of Sister Thea Bowman Nov. 18 at Cathedral of St. Peter the Apostle. Jackson Bishop Joseph R. Kopacz, at left, read the edict at the start of the Mass. (CNS photo/Maureen Smith, Mississippi Catholic)

JACKSON, Miss. (CNS) — Bishop Joseph R. Kopacz of Jackson read the edict to open the sainthood cause for Sister Thea Bowman at Mass Nov. 18 at the Cathedral of St. Peter the Apostle in downtown Jackson.

The church was packed with people who loved Sister Bowman and can’t wait to see her become a saint.

Days before the Mass, the U.S. Conference of Catholic Bishops unanimously voted in support of the cause moving forward during their general assembly in Baltimore.

Some of the songs she sang at that bishop’s meeting took center stage at the Mass.

Phyllis Lewis-Hale, a professor from Jackson State University sang “Sometimes I Feel Like a Motherless Child” as a prelude to the Mass and brought the congregation to its feet with “We Shall Overcome” after Communion. Everyone in the church spontaneously joined hands and swayed as they sang with Lewis-Hale — much like the bishops did in 1989.

Members of the choir from Sister Bowman’s home parish of Holy Child Jesus in Canton offered “Be Encouraged” during Communion.

Bernadette Otto-Russell, one of the singers, first sang in Sister Bowman’s choir when she was in the third grade.

“This was awesome. This is an enjoyable and memorable moment — I’m getting full just thinking about it. I think the people that know Sister Thea – they know who she is and they will always cherish her and also her memories. She will never die,” said Otto-Russell, adding that it was a joy and an honor to sing for her childhood teacher.

The postulator, Andrea Ambrosi and his assistant, Nina Bartulica, sat in the front pew with representatives from the Franciscan Sisters of Perpetual Adoration: Sister Eileen McKenzie, president; Sister Marla Lang and Sister Helen Elsbernd, both classmates of Sister Thea; and Sister Dorothy Kundinger, Sister Thea’s assistant during her illness.

“She was my sister and my friend,” said Sister Kundinger, who was all smiles after the Mass, greeting friends and enjoying the moment.

A delegation of students from Sister Thea Bowman Catholic School in Jackson handed out prayer cards after Mass. The students were thrilled to be a part of this historic moment for their school’s namesake.

Sixth-grader Alexander Mason said he and his fellow students know the story of her life and have learned many lessons from Sister Thea’s mantra that she wanted to live until she died.

“She taught me to always have perseverance and that I should never give up – even if I am close to death, I should keep on pushing myself to try,” Mason told the Mississippi Catholic, newspaper of the Diocese of Jackson.

In his homily Bishop Kopacz quoted the old testament reading for the day from the Book of Daniel “The wise shall shine like the splendor of the firmament. Those who lead the many to justice shall be like the stars forever.” He spoke of Sister Thea’s wisdom and joy and holiness, saying that today “her holiness shines upon us.”

PREVIOUS: Sister Thea Bowman encouraged others to stand up for their rights

NEXT: Ohio House passes bill to ban abortion after heartbeat of unborn detected