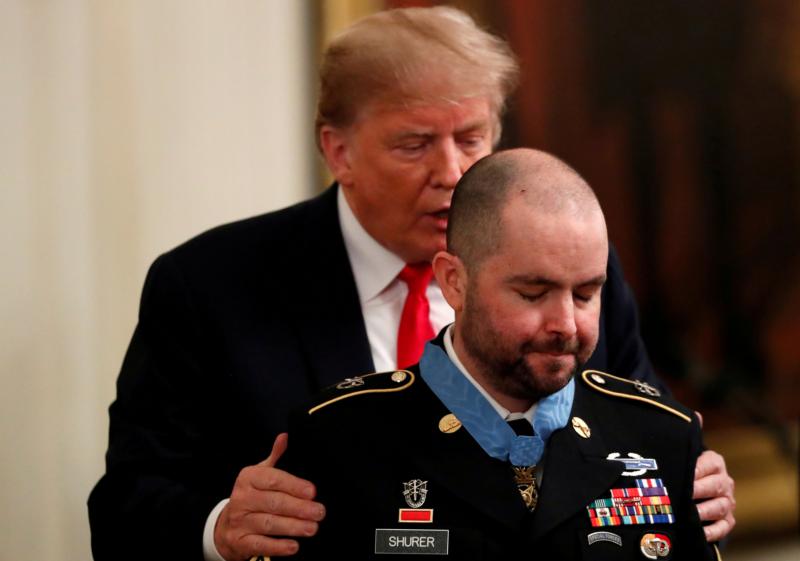 U.S. President Donald Trump embraces former Army medic Ronald J. Shurer Oct. 1 at the White House in Washington after awarding him the Medal of Honor for actions he took while serving in 2008 in Afghanistan. Shurer is a parishioner at the Church of the Nativity in Burke, Va. (CNS photo/Leah Millis, Reuters)

ARLINGTON, Va. (CNS) — When describing life-altering decisions and brave moments of selflessness, former Army Staff Sgt. and Medal of Honor recipient Ronald Shurer speaks succinctly and matter-of-factly, as if his actions were the most natural thing in the world.

Why did he enlist after 9/11? It didn’t seem right not to, he replied.

Why did he become a medic? To take care of the troops.

What was going through his mind during a mission gone wrong in Afghanistan? His first and only prayer was that his wife and infant son, Cameron, would be OK if he died. And for the next several hours, he focused on one thing at a time while caring for the soldiers being shot all around him. Service is second nature for him.

Shurer was born on the anniversary of the attacks on Pearl Harbor — Dec. 7, 1978, in Fairbanks, Alaska. His parents met in the Air Force, and his father continued to serve while Shurer was growing up. After graduating from Washington State University, Shurer applied to join the Marines but was rejected due to an old injury.

“Boy, that was a bad mistake. But they made up for it, right?” President Donald Trump noted during a ceremony Oct. 1 at the White House to award Shurer the Medal of Honor for actions he took while serving in 2008 in Afghanistan.

Shurer was studying economics in graduate school when terrorists hijacked four planes and killed thousands of Americans on 9/11. The attack on American soil, reminiscent of the Japanese assault he learned about as a child, inspired Shurer to reapply to the military. In 2002, he was accepted into the U.S. Army. He later became a Green Beret.

Why join the Special Forces? “It seemed liked another challenge, another way to push, to do a little bit more,” he told the Arlington Catholic Herald, newspaper of the Arlington Diocese.

Shurer and his wife, Miranda, met online in 2004. They married a year and half after they began dating, weeks before he deployed to Afghanistan. It was during his second tour, in April 2008, that the harrowing battle occurred.

“It started just like every other mission,” said Shurer. Their job that day was to capture or kill targets of Hezeb Islami al Gulbadin, or HIG, a large faction of the anti-coalition militia that operated in the Shok Valley of eastern Afghanistan.

“Everybody (got) up really early; we’d usually go out with 100 Afghan commandos and our team, roughly about a dozen Americans. We got up on helicopters, flew 30, 45 minutes. The helicopters flew away and it was very cold, very quiet. We were in a little river valley just looking up at the mountains.”

The lead team of their group was working its way up the mountain when they were attacked with guns and rocket-propelled grenades. Shurer moved from the rear to the front and began to treat the injured, returning fire when he could.

“I was 100 percent convinced I was going to die. It was six and a half hours of being shot at,” he said. “It was just a series of moments … trying to figure out which one of the wounded guys needs the most care. What’s the best thing I could be doing right now?”

One bullet went through his team sergeant’s arm and hit Shurer on the helmet.

“It felt like I got hit in the head with a baseball bat,” he said. He was so covered in other’s people’s blood he wasn’t sure if he was hurt. But his friend Dillon said he was all right and he continued providing life-saving medical care. When he returned to base later that night, he discovered a bullet had grazed his arm.

Many of the men were so injured they couldn’t walk down the mountain. So Shurer and others wrapped nylon tubing under the arms of the wounded and lowered them down a cliff.

“All that time, bombs are still going off,” he said. Eventually, all the men and the bodies of an Afghan interpreter whom Shurer knew as CK and an Afghan commander were loaded onto the helicopters. “We weren’t leaving them,” said Shurer.

About a month later, Shurer returned to the States. Today, he is a Secret Service special agent. “It seemed like a good way to continue to serve. I like the mission,” he said.

In 2011, he and his wife had a second son, Tyler Edris, whose middle name is the real name of the Afghan interpreter who was killed in action. “(CK’s) dream was to come to America and to join the Army,” said Shurer. “It was important to (Miranda and I) that a little piece of him did make it over here.”

Shurer said his Catholic faith plays an important role in his life and in his family’s life, especially since he was diagnosed with lung cancer last March.

Since the diagnosis they have spent a lot of time with Father Robert C. Cilinski, pastor of the Church of Nativity in Burke, “just processing all this,” he said. “He’s an important part of our family.”

Shurer is undergoing chemotherapy but is able to work on the operations side of guarding the president. “Now I make sure someone else is always protecting him,” he said.

Being chosen as a Medal of Honor recipient came as a complete shock to the unassuming veteran. Shortly after the battle, he and several of his teammates were awarded the Silver Star, the third highest award for valor in combat.

At the White House ceremony for the Medal of Honor, Trump put the blue ribbon and golden star around his neck in front of his family, teammates and members of the armed services.

“Cameron, Tyler, we stand in awe of you father’s courage,” said Trump in his remarks. “He’s the best dad and role model two boys could ever ask for.”

As Shurer stood to applause, he looked stoically around the room, and then gave a quick smile and wink to the boys in the front row.