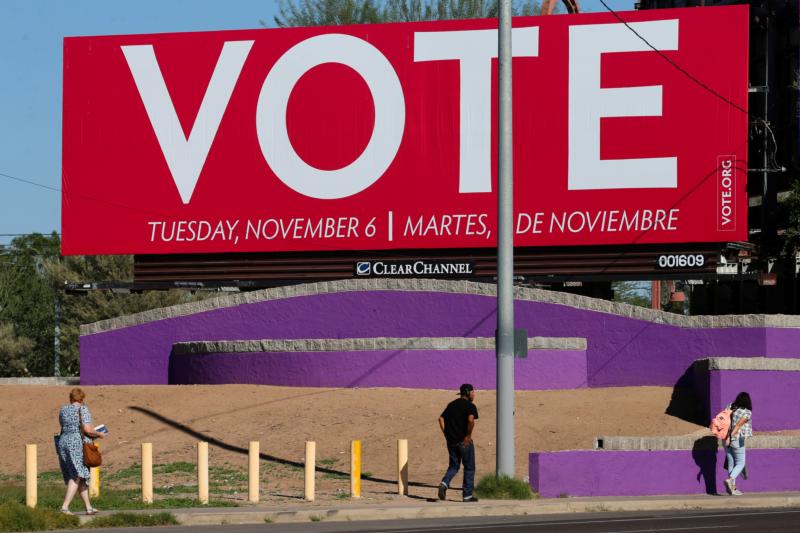 People in Phoenix Nov. 7 walk under a billboard that encouraged people to vote in the midterm elections a day earlier. (CNS photo/Elijah Nouvelage, Reuters)

WASHINGTON (CNS) — With the Democratic takeover of the House of Representatives in the midterm elections, the demographic dividing lines among voters who identify as religious have become more pronounced.

White Catholics, according to data from the Pew Research Center, still skew Republican, while Hispanic Catholics trend Democratic. And white evangelicals are more dependably Republican than they’ve ever been.

“I’m struck by the continuity,” said Gregory Smith, Pew’s associate director of research, at a panel discussion at Georgetown University Nov. 19. The event, “Faith and the Faithful in the Midterm Elections,” was co-sponsored by the university’s Initiative on Catholic Social Thought and Public Life and its Institute of Politics and Public Service.

Among white evangelicals, “three-fourths voted for the Republican candidate for Congress in their district. That is unchanged in the last decade or so.”

Exit polls by the National Election Pool, a consortium of American news organizations, indicated that 75 percent of white voters who describe themselves as evangelical or born-again Christians — a group including Catholics — voted for Republican House candidates. Voters classified as religious “nones,” however — a growing category — voted for Democrats.

Additionally, exit polls showed that Catholic voters “split right down the middle,” Smith added. Reflecting the growing number of Hispanic voters, 50 percent of Catholics overall said they voted for Democrats, while 49 percent voted for Republicans. That’s a pronounced change from the 2010 and 2014 midterms, in which Catholics favored Republicans by about 10 percentage points.

The result, Smith concluded, is that Catholics are splitting into “two camps: One trends strong Republican, one trends Democratic.”

Among Catholic Republicans, Smith said, “six in 10 say that they believe poor people have it easy because they can get government help without doing anything in return.” Seven in 10 Catholic Democrats “say they think abortion should be legal in most cases.”

Panel moderator John Carr, noting the demographic changes in his own Washington parish, which has a rapidly growing Hispanic presence, said he’s had conversations in which he concluded the change “is very simple. We do funerals. They do baptisms.”

Hispanic voters, observed Pew researcher Ana Gonzalez-Barrera, skew “very young. Half of them are millennials. Two-thirds of them are under 35 right now.” But although they’re considered reliably Democratic voters, “they’re not a monolithic group.”

Robert Costa, a national political reporter for The Washington Post and moderator of Washington Week on PBS, predicted that the future battlefield for religious voters, especially on abortion, will be the courts and state legislatures.

Believing that the state is the primary threat to their beliefs, because President Donald Trump can deliver conservative Supreme Court justices, like Neil Gorsuch and Brent Kavanaugh, they consider Trump “acceptable,” he said.

“The power of the white conservative voting bloc to achieve its ends is increasingly remarkable to me” said Elizabeth Dias, a national correspondent for The New York Times. “Holding the Senate allows them to achieve long-term plans, including a third Supreme Court justice.”

Based on the House results, in which Democrats have already picked up 37 seats, “the Republicans really wonder if they’re paying a political cost for President Trump’s remarks on immigration,” Costa said.

That was not the case in 2016, however. “A lot of religious voters felt upheaval in their lives. They wanted to put a stop to it. And that stop was Donald Trump,” he added.

That doesn’t mean that they thought of Trump as sharing their values. “It was about winning for him. He realized that evangelical voters didn’t want, or necessarily care, whether a candidate was like them. They wanted power.”

He saw the struggle of Catholic politicians in June, Costa said, after he tweeted a link to an article written by Alexandria Ocasio-Cortez, a Democratic Socialist from New York, about her Catholic faith and her fight for criminal justice reform, in the Jesuit magazine America.

“What should be the ultimate goal of sentencing and incarceration?” she wrote. “Is it punishment? Rehabilitation? Forgiveness? For Catholics, these questions tie directly to the heart of our faith.”

Costa found himself inundated with angry text messages from Catholic members of Congress, whom he didn’t name, all of them critical of the very notion of the article.

“So hard-line, they didn’t want to talk about Alexandria Ocasio-Cortez,” he said.

Now the most prominent liberal joining the House, the congresswoman-elect supports a so-called right to abortion, which is contrary to Catholic teaching. She backs having a nationalized health care system that would grant “open access to safe, legal, affordable abortion.”