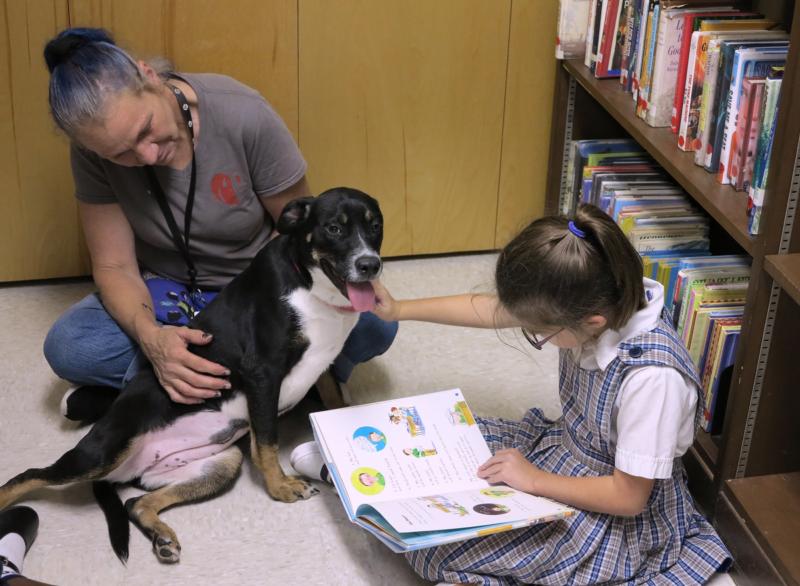 In a partnership launched in October with the Jefferson Parish Society for the Prevention of Cruelty to Animals, first- through third-graders at Immaculate Conception School in suburban New Orleans take turns reading to shelter dogs twice a month during their regularly scheduled library time.

And dogs, it turns out, make the perfect non-judgmental audience for young readers.

“It’s very awesome and entertaining to read to a dog. I have never known a dog that is hurtful,” said third- grader Jack Walker during a visit to his school library by Cambrie, a female pit bull mix rescued from the streets of Harvey, and Annie, a black-and-white mutt that was surrendered to the SPCA by her owner.

“It’s fun and you got to pet them,” second-grader Rylan Daigle noted of his canine reading partners. “I would rather read to a dog than (to) my friends, because the dogs are cuter.”

“When the dogs come back to the shelter after being read to, you can really see the difference in them,” marveled Dezzie Howe, the animal care attendant with the Jefferson Parish SPCA who facilitated the recent visit to the Salesian-run school, along with SPCA animal care officer Jordan Encalade.

“The dogs come back completely relaxed, they’re very friendly, and most of them are smiling. Most people don’t realize that dogs can smile,” Howe added in an interview with the Clarion Herald, newspaper of the Archdiocese of New Orleans. “You’ll see their whole back jaw pull up.”

The visiting shelter dogs are pre-screened by the SPCA to make sure they are temperamentally fit to interact with children and other dogs. They also are “cat-tested” in advance in the event they encounter a child or adult who might be throwing off a feline scent. All students must have signed parental permission to participate.

The gentle, even tones of the children’s reading voices quickly soothe and settle the furry listeners, Howe said.

“All of the dogs so far that we’ve brought in have behaved so well,” she said, noting that contrary to popular belief, the overwhelming majority of dogs sheltered by the SPCA are not strays, but pre-owned pets just looking for a second chance at a home.

The program, believed to be the first of its kind in the greater New Orleans area, was initiated by Immaculate Conception kindergarten teacher Bridget Bourgeois, who had seen articles about similar programs elsewhere in the country in which children would travel to kennels to read to dogs.

“They discovered an increase in reading scores and reading fluency in the students who read to the dogs because the dogs are not biased,” Bourgeois said. “They also saw a spike in adoption rates of the dogs that were being read to. They were more socialized, so they tended to come to the front of the cages (and be seen).”

Bourgeois said the program has become such a hit, it might be expanded to offer Immaculate Conception’s middle-school students opportunities to practice their speeches in front of the shelter dogs.

“I think it’s good because (the dogs) are all the time locked up in the shelter,” the student said, “and this gets them out to have some space.”

Donze is a staff writer at the Clarion Herald, newspaper of the Archdiocese of New Orleans. She also is editor of Kids’ Clarion.