Summer’s Encuentro a ‘balm for the wounded,’ says archbishop 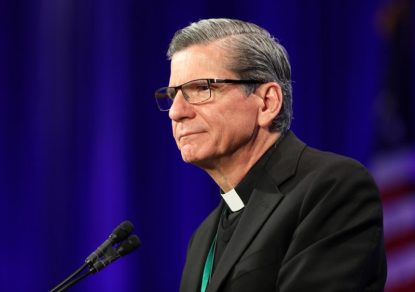 Archbishop Gustavo Garcia-Siller of San Antonio listens to a question as he gives a report on V Encuentro Nov. 14 at the fall general assembly of the U.S. Conference of Catholic Bishops in Baltimore. (CNS photo/Bob Roller)

BALTIMORE (CNS) — San Antonio Archbishop Gustavo Garcia-Siller said on the last day of the fall meeting of U.S. bishops in Baltimore that this past summer’s National Fifth Encuentro, a gathering of Latino Catholics from around the country, was “balm for the wounded.”

Though the Encuentro was a process that included a variety of meetings in parishes, at dioceses and at regional events that took place around the country over a period of two years, it culminated with a national gathering in Grapevine, Texas, in September in which about 3,500, including 124 bishops, participated.

Archbishop Garcia-Siller summarized the event and the two-year process. He spoke of how it was helping the U.S. church to respond better to Latino Catholics, who currently make up 40 percent of the church and are the largest group of young Catholics in the United States.

Latinos make up 52 percent of Catholics under 30 in the U.S. and the hope for the Encuentro, which means “encounter” in Spanish, was to develop leadership roles for many of them.

Many prelates, such as retired Auxiliary Bishop Peter A. Rosazza of Hartford, Connecticut, spoke of the positive experience they’d had with participants, particularly since the large gathering took place shortly after the cascade of bad publicity aimed at bishops and the church after a Pennsylvania grand jury report released Aug. 14 reopened scrutiny of sex abuse cases around the country.

“The affirmation that they gave the bishops was just wonderful at a time when we were being beaten up all over the place,” said Bishop Rosazza. “So, it was wonderful to experience that.”

During a question and comment part of the presentation, Auxiliary Bishop Eusebio L. Elizondo of Seattle said the outpouring of support for bishops at the Encuentro was “not because they (Latinos) are naive, nor because they want to deny the scandals or anything, but because they are a people of faith, a very strong faith, and they go beyond the scandals, and they keep on persevering because they have suffered a lot already through their whole history of Christianity, especially in Latin America.”

Faith, he said, helps them “keep strong enough and persevering and that’s a wonderful gift to the church in the United States.”

Bishop Robert P. Deeley of Portland, Maine, said that for Latinos from his area, the Encuentro marked the first time that they had participated in a major event that focused on them and “it made them feel part of the church, part of the process.”

Bishop John E. Stowe of Lexington, Kentucky, thanked the organizers and said it was particularly meaningful during a time when many Latinos in the U.S. are feeling persecuted.

“What an incredible sign it was,” he said, addressing the assembly of bishops. “It was affirming for that community. It was prophetic sign to be together and recognize that contribution.”

He said many also were not able to travel to the event because of their immigration status and thanked young Catholics for the experiences they shared during the event, particularly those who are beneficiaries of the Deferred Action for Childhood Arrivals program, or DACA, which in 2012 began offering temporary reprieve from deportation and some legal documentation to youth brought to the country illegally as children, as long as they met certain criteria.

They are the consequence of a country that refuses to help them remedy their legal immigration status even as they have gifts to contribute to the country, Bishop Stowe said.

“Their whole futures are put on hold as the country refuses to deal with their status, refuses to regularize their situation, refuses to allow them to contribute their gifts in a safe and legal way,” he said. “It was profound to have them make their contribution there.”

Bishop Jaime Soto of Sacramento, California, said his only criticism was that the event didn’t address marriage.

Participants “spoke a lot about family and how important family is but never acknowledged the problem that nobody’s getting married and that is an epidemic, a reality today,” he said. “It’s a serious problem that didn’t get articulated.”

Bishop Daniel E. Flores of Brownsville, Texas, said another concern he’d heard about was the lack of participation by the immigrant poor. He also mentioned the recent Synod of Bishops that focused on youth in the church emphasized the concern for youth on the periphery.

“We have a responsibility to keep in mind the young people who can’t participate easily in the processes and programs that we have in our dioceses for our young people,” Bishop Flores said. “We always have to ask ourselves the question: Who’s not here and why not?”

NEXT: Army of volunteers provides turkey, all the trimmings for those in need