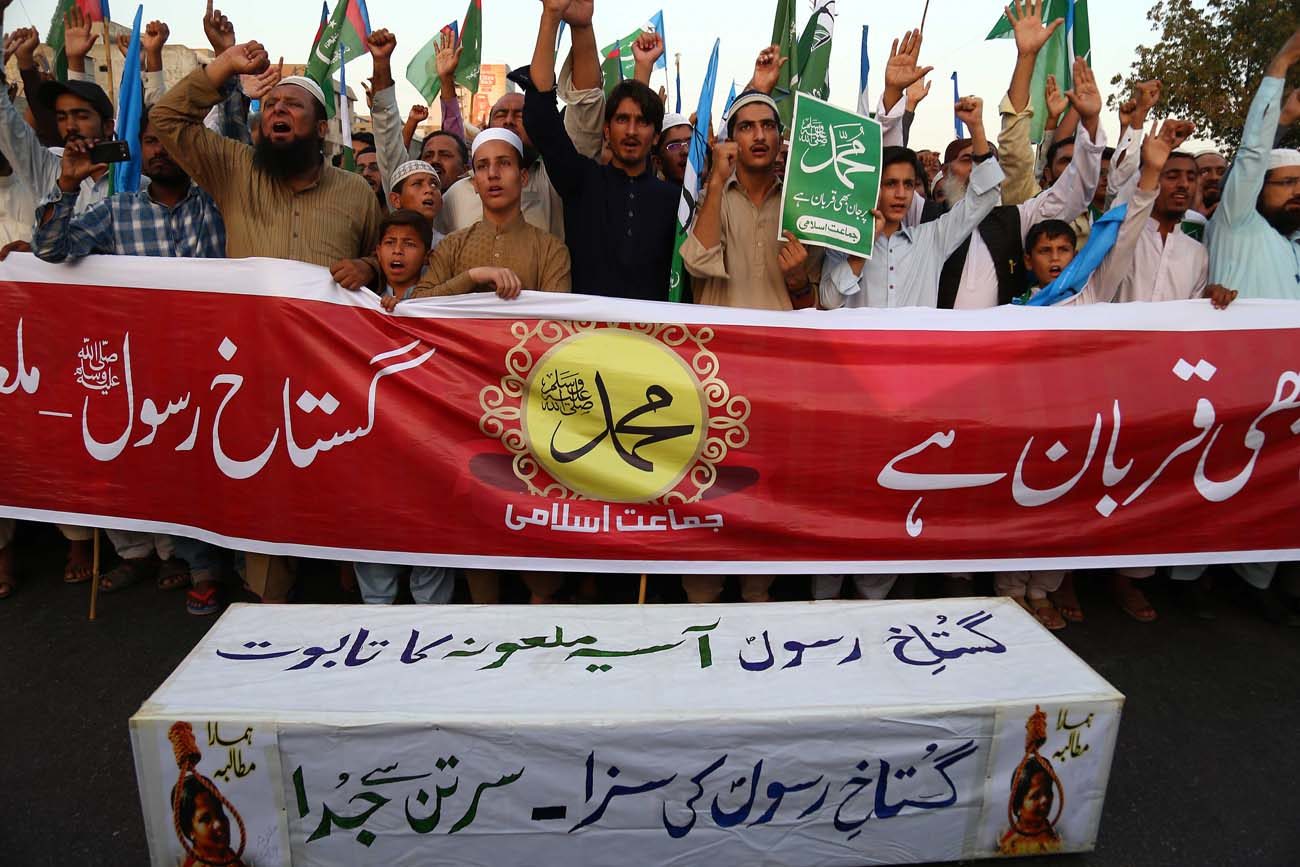 Men and boys protest in Karachi, Pakistan, Nov. 4, days after the Supreme Court acquitted Asia Bibi, a Catholic accused of blasphemy. The acquittal is being challenged in the country's Supreme Court, according to her husband. (CNS photo/Shahzaib Akber, EPA)

MANCHESTER, England (CNS) — The acquittal of a Pakistani Catholic woman sentenced to hang for blasphemy is to be challenged in the country’s Supreme Court, according to her husband.

Three judges of the court ordered Oct. 31 that the death sentence against Asia Bibi, a mother of five, was to be set aside and she was to be released from prison, where she has spent eight years in solitary confinement.

But her husband, Ashiq Masih, confirmed in a Nov. 4 telephone interview with BBC World Service that the court had since agreed to accept a review petition questioning the legitimacy of her acquittal.

The British Pakistani Christian Association said in a Nov. 5 press release that the review was to begin that same day. The source was Joseph Nadeem, a close family friend, according to spokesman Wilson Chowdharay.

The challenge to Bibi’s freedom has been made by Tehreek-e-Labbaaik, an extremist group which is also putting pressure on the government to try to stop Bibi from leaving Pakistan, even if her acquittal is upheld.

In his interview, Ashiq told the BBC that he was “hopeful” and “confident” that the Supreme Court in Lahore would dismiss the appeal.

“I really hope it will not take very much time — two to four days — and this matter could be disposed of by the government and the Supreme Court,” he said.

Ashiq said neither he nor his family have seen Bibi, 55, who has remained in protective custody since she acquitted.

He said the family was desperate to find asylum in Europe or North America as soon as possible because they believed their lives were in danger.

He said: “We are so restricted our mobility is virtually zero. We cannot go out anywhere. Even for basic things, we have to rely on other people.

“I have never been so afraid as I am now for my family,” he added. “My life and the life of my family is really under threat. Since the verdict has come out, we haven’t been provided with any security.”

Salman Akram Raja, an advocate of the Supreme Court, said Bibi and her family were “quite right to fear for their lives.”

He said he was confident, however, that the review petition would be dismissed and there would be no legal obstacles to Bibi and her family leaving Pakistan.

“Asia is an acquitted person, she has no charges pending against her,” he told the BBC in a Nov. 4 telephone interview. “There is no law under which the state could restrain her from leaving the country if she has a valid passport and a travel visa.

“There is no grounds for restraining her, so to say that she is being detained on account of some agreement with a religious group (and the government) is to go completely outside the ambit of the law,” he continued.

Raja said that review petitions were seldom sustainable and were particularly weak if made by “busybodies off the streets” rather than by the state or by an original complainant. “Review petitions, legally speaking, are not sustainable,” he said.

PREVIOUS: In India, Missionaries of Charity will again offer children for adoption