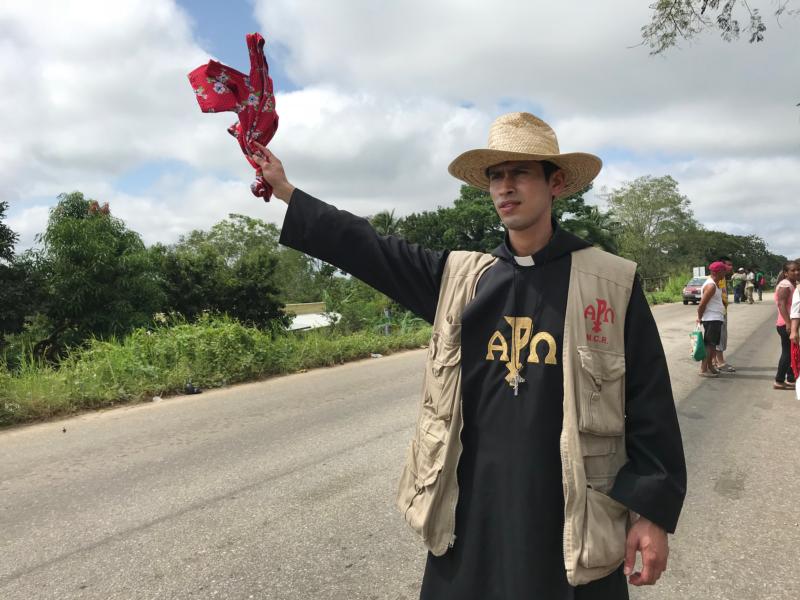 Brother Jonathan Ortiz, a member of the Missionaries of the Risen Christ, flags down a vehicle Oct. 3 near Sayula in Mexico’s Veracruz state. The religious order has provided migrants in a caravan transiting Mexico with medical attention, but resorted to helping them get rides as they moved through a dangerous area. (CNS photo/David Agren)

CORDOBA, Mexico (CNS) — The caravan of migrants making its way through Mexico has started arriving in Mexico City, where the Basilica of Our Lady of Guadalupe, the world’s most-visited Marian shrine, has opened its shelter for pilgrims to weary Central American migrants.

At least 1,000 migrants departed Nov. 5 from Cordoba, 190 miles southeast of Mexico City, hoping to make a final push to the national capital. They were joined by another group departing from Puebla — closer to Mexico City — where they had received assistance and slept in parishes.

One caravan set out Oct. 12 from San Pedro Sula, Honduras, and mushroomed in size as it moved northward. Its participants have pushed through borders and past police blockades, slept on sidewalks and in town squares and suffered illnesses and injuries brought on by long walks in hot and inclement weather.

Catholics working on the immigration issue in Central America say caravans have become a preferred form of traveling through Mexico, where crimes are commonly committed against migrants traveling solo or in small groups. Caravans, they say, offer security in numbers and make it unnecessary to pay high fees to human smugglers.

In interviews in southern Mexico, most of the migrants said they were fleeing a combination of violence, poverty and an inability to make ends meet in the northern triangle of Central America: Honduras, Guatemala and El Salvador, three of the poorest and most violent countries in the hemisphere.

The caravan has captured international media attention and been monitored by everyone from Mexican state human rights commissions to priests and religious to civil society organizations — something observers say has prevented the police, wishing to avoid an embarrassing incident, from acting against the migrants.

“We feel protected. There are human rights people, nuns, the Catholic Church, the Red Cross,” said Edwin Paz, 41, a mechanic who left Honduras with his wife — two-and-a-half months pregnant — and teenage son.

Paz tried to travel through Mexico on his own a decade ago, riding atop a train known as La Bestia. He was detained by railway security in northern Mexico and asked pay $200, which he didn’t have, and was subsequently turned over to police and deported.

“Good-hearted Mexicans have been helping us,” he said at a shelter in Cordoba.

Parishes across southern Mexico have fed the migrants and collected clothes and shoes for them. Some Mexicans of humble means have offered what they can: plates of beans, rice and tortillas; plastic bags filled with water and gently used clothing.

A group of religious belonging to The Missionaries of the Risen Christ — which includes nurses, physicians and psychologists, working with support from Caritas Mexico — has set up a tent at each stop, where they tend to medical issues such as wounded feet, twists and sprains, and children with coughs, colds and fevers.

“Grab onto something strong,” said Sister Antonia Becerra, leader of the religious working with migrants, at an assembly of caravan participants in the town of Pijijiapan. “And there’s nothing stronger to grab onto than Jesus Christ.”

As the caravan proceeded through the Gulf Coast state of Veracruz and a zone notorious for crimes committed against migrants, members of the Missionaries of the Risen Christ started helping caravan participants by flagging down rides for them. They figured motorists would be more trusting of people in habits.

“In the name of charity, please take two people,” Brother Jonathan Ortiz, dressed in his black habit and waving a red handkerchief, asked a driver near Sayula, Veracruz. The driver did not pick up any passengers, but others were willing to help.

The religious put out a call for better shoes, blankets and sweaters as the caravan arrived in central Mexico, where the altitude tops 7,000 feet and nighttime temperatures are chilly.

U.S. President Donald Trump has said the caravan will not be welcomed and sent troops to the border with Mexico ahead of its possible arrival.

The Mexican government has offered caravan participants temporary work permits and social benefits. It said in a Nov. 3 statement that 5,347 migrants with caravans were in the country, while 2,793 refugee claims had been made.