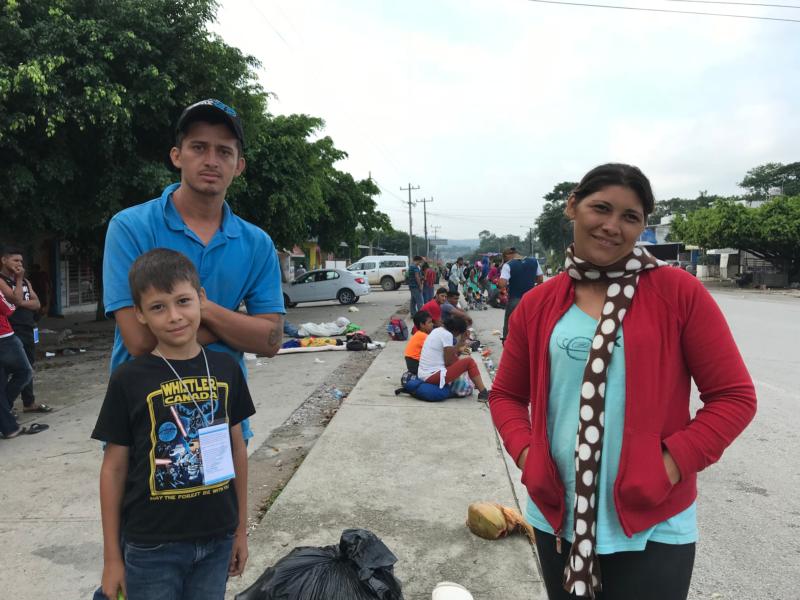 Karla Santos, Brian Maldonado and their son Marvin, pictured in a Nov. 2 photo in Matias Romero, Mexico, wanted to leave Honduras and saw the caravan of migrants as their opportunity. Observers say the caravans are proving popular since there is safety in numbers and smugglers’ fees are avoided. (CNS photo/David Agren)

Santos, 33, was looking for an out, when she saw a post on Facebook and heard a news story about a caravan forming in early October. She figured it was her chance to head north.

“That’s where the dream began,” she said while trying to find transport for her family in the city of Matias Romero, some 425 southeast of Mexico City on the Isthmus of Tehuantepec.

With the caravan, she figured, “It would be easier than going it alone,” though it has not been easy. Her son, like many children, was suffering from a cough, and Santos’ feet hurt — chewed up by the flip-flops she was wearing as the family walked and took rides, averaging 40 miles per day.

For the better part of a decade, migrant advocacy organizations have convened caravans, which crossed Mexico to the U.S. border. The annual “Stations of the Cross Caravan” convened during Easter week captured the attention of U.S. President Donald Trump, who tweeted his disapproval as it progressed through southern Mexico.

Trump has promised that the caravans winding their way north this fall will not enter the United States and ordered more than 5,000 troops sent to the U.S.-Mexico border. He said he might deploy up to 15,000 troops.

Despite the president’s threats, at least three caravans have formed in Central America, where countries in the northern triangle — Honduras, Guatemala and El Salvador — rank among the most violent and impoverished in the hemisphere.

While not new, caravans have become the preferred way for Central Americans to travel north through Mexico, where the risks of the road include rape, kidnapping and extortion at the hands of criminal gangs and crooked officials alike. Caravans also cut costs for migrants as the price of hiring a human smuggler has soared — observers put the figure as high as $13,000 per person — as the U.S. border becomes more difficult to cross.

“These are the same people that have always been leaving,” said Rick Jones, youth and migration adviser at Catholic Relief Services in El Salvador. “The caravan forming in-country is what’s different.”

The caravans offer security as “migrants protect each other,” said Sister Antonia Becerra, a sister with the Missionaries of the Risen Christ and director of a ministry providing medical care to the first of the caravans to enter Mexico.

When caravans are in the open — with media coverage, civil society organizations assisting and human rights observers watching — police are often unable to impede their progress, said one mayor in Chiapas state. Generous locals, municipal governments and Catholic parishes have provided food, clothing and medical attention to weary migrants.

Mexico has sent Federal Police officers to the southern border, closed a port of entry and had marines patrol the Suchiate River, which separates Mexico and Guatemala. But the caravans have forded the river anyway and moved northward.

The Mexican government has tried to thin out the caravan by offering temporary work permits to migrants currently in Oaxaca and Chiapas states.

Slightly more than 2,900 migrants have applied for asylum in Mexico, while 927 caravan participants have gone home voluntarily, according to government figures.

Scalabrini Sister Lidia Mara Silva de Souza, director of the Honduran bishops’ human mobility ministry, said at least one planeload of people abandoning the caravan has arrived daily in Honduras over the past week.

Many, however, “return believing promises from the government to help them, but since there’s nothing here, they take to the migrant path again,” she said.

Sister Lidia, who is also coordinator of the returned migrant centers, which receive returnees flown back from the United States, said caravans are forming organically, even though politicians in the United States have alleged otherwise. Honduran President Juan Orlando Hernandez alleges the outflow of migrants has been orchestrated to make him look bad.

“We have interviewed various people returning from the caravan,” Sister Lidia said, “and everyone says nobody paid them or tricked them. They joined due to the need to find a better life.”

Central American migrants appear to be paying little heed to the political discourse in the United States.

Santos spoke of hardship on the road: walking for hours under a scorching hot sun, worrying about security — especially after child-snatching rumors started spreading one night — and her 11-year-old son, whom she left in Honduras with her grandmother.

It rained hard while the family spent the night in Matias Romero, so they slept under the awning of a business lining the highway as tanker trucks rolled by at all hours. But Santos did not seem dissuaded — not by the road, nor by the U.S. president’s tough promises.

“My dream is to work hard to help my family get ahead, then return to Honduras,” she said, explaining her work as a domestic worker paid little and her husband’s carpentry business had been hit by extortion demands.

“God is going to touch the heart of Donald Trump,” she said, “so he can look at poor people struggling, who want a better life.”

NEXT: Life is radiant when it is lived with love and service, pope says