Injustice toward migrants, refugees made in complicit silence, pope says 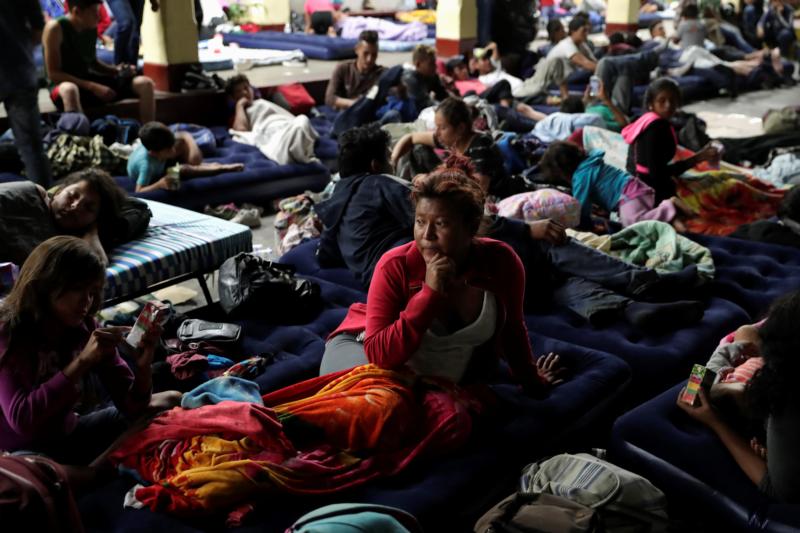 A Honduran migrant rests migrants at a shelter in Guatemala City Oct. 18. She and the other migrants are part of a caravan trying to reach the U.S. (CNS photo/Luis Echeverria, Reuters)

VATICAN CITY (CNS) — The “throwaway culture” has become a pandemic today, and it leaves migrants and displaced people without a voice and at the mercy of those who exploit them, Pope Francis said.

In a message sent Nov. 2 to participants at the World Social Forum on Migrations, the pope said supporting migrants not only involves calling out injustice but also helping to “restore dignity to those who live with great uncertainty and who are unable to dream of a better world.”

“Among these last ones are migrants, refugees and the displaced who are ignored, exploited, violated and abused through the guilty silence of many,” he said.

The Nov. 2-4 conference in Mexico City was dedicated to finding ways to influence public policy “in favor of the defense of the rights of migrants and their families” and to “strengthening the dialogues between social networks and migrants,” the forum’s website stated.

Among those present were Jesuit Father Michael Czerny, undersecretary of the Migrants and Refugee Section of the Vatican Dicastery for Promoting Integral Human Development; Cardinal Carlos Aguiar Retes of Mexico City; and Archbishop Franco Coppola, apostolic nuncio to Mexico.

In his message, the pope said the conference’s focus on human rights, climate change and political advocacy are important and deserve a careful reflection from “distinct perspectives,” recognizing “the complexity of the migration phenomenon.”

Pope Francis said the U.N. Global Compact for Migration, an intergovernmental pact that seeks to address the current migration crisis, is an opportunity for the international community to promote the integral human development of migrants and refugees.

“This can only be achieved in a sincere, constructive and transparent dialogue between all actors, with respect to each one’s roles and responsibilities,” the pope said.

Expressing support for the U.N. global compact, which is expected to be approved by world leaders in December, the pope had offered the Vatican’s 20-point action plan that included concrete proposals to help governments improve the situation of migrants and refugees.

The eight-page page plan contained proposals “grounded on the church’s best practices responding to the needs of migrants and refugees at the grassroots level” and provided “practical considerations which Catholic and other advocates can use, add to and develop in their dialogue with governments toward the Global Compact.”

In his address to the forum, Father Czerny highlighted the 20-point plan, telling participants that a “change of mentality” was needed in order “to pass from considering others as a threat to our comfort, and value them” as people who can contribute to society through their experiences.

“A just policy is one that is at the service of the person, of all affected people; that provides adequate solutions to guarantee security, respect for the rights and dignity of all and that knows how to look after its own country while keeping in mind the well-being of other countries in an increasingly interconnected world,” Father Czerny said.

PREVIOUS: All Souls feast is time to remember, to hope, pope says

NEXT: Caravans continue forming, despite uncertain welcome in U.S.