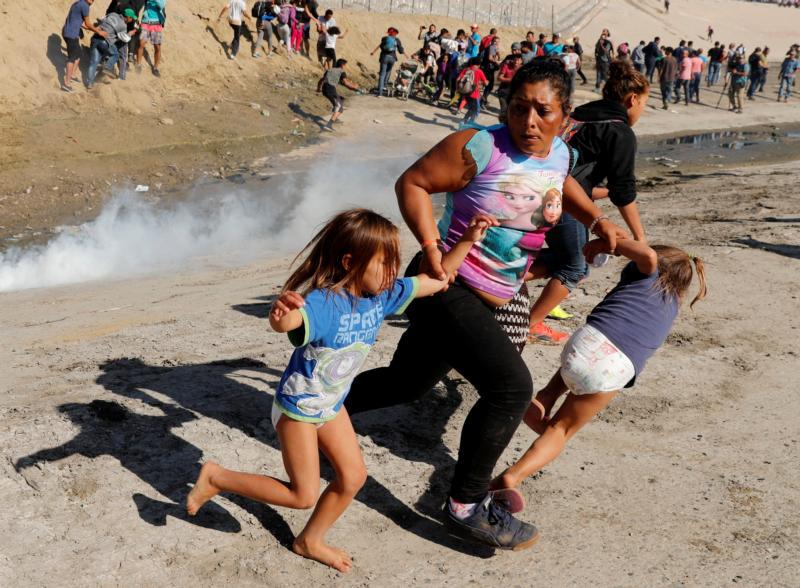 A Honduran migrant family who are part of a caravan trying to reach the U.S. run from tear gas released by U.S. border patrol near Nov. 25 the fence between Mexico and the United States in Tijuana, Mexico. (CNS photo/Kim Kyung-Hoon, Reuters)

MEXICO CITY (CNS) — The chaotic scene in Tijuana Nov. 25 — when migrants, including women and children, were repelled from the U.S. border with tear gas — prompted the closure of one of the world’s busiest border crossings. It also showed the increasing impatience and despair of thousands of caravan participants, who could spend months in an uncomfortable camp as they wait to present asylum claims to U.S. officials.

And while some Catholic migrant advocates criticized U.S. reaction as excessive, some who work with migrants through a network of shelters stretching the length of the country said they tried warning the caravan participants and a migrant advocacy group accompanying it, Pueblo Sin Fronteras, that — unlike past years, when smaller caravans would cross Mexico — times had changed. Resources for sustaining thousands of migrants in Tijuana are stretched thin and the current U.S. government has showed few signs of speeding up the process for accepting asylum applications.

Press reports from Tijuana described a peaceful protest, in which the migrants planned to present their case: that they had come only to work and save their own lives. But the protest was met by a wall of Mexican police officers, prompting the migrants to detour the barricade and head to a train border crossing.

U.S. Customs and Border Protection said in a tweet that some migrants “threw projectiles.” In response, “Border Patrol agents deployed tear gas to dispel the group because of the risk to agents’ safety. Several agents were hit by the projectiles.”

The caravan has crossed closed borders and pushed past police barricades since departing San Pedro Sula, Honduras, in mid-October. Parishes have assisted the original caravan and several subsequent caravans as they passed through southern Mexico; a group of religious offered medical attention, and dioceses have taken up collections.

But now the migrants have run up against the U.S. border and a U.S. administration that has warned that the caravan will not enter the country. The U.S. has allowed fewer than 50 claims to be made daily, even as thousands wait their turn in Mexico.

The caravan also risks becoming unwelcome in Tijuana, where hostile attitudes have already been expressed, border closures hurt the economy and the local government warned resources were running low.

Taking that many people to one border crossing and organizing a march “can’t be a good idea. It’s a horrific one,” said Father Alejandro Solalinde, who operates a migrant shelter in southern Oaxaca state. “But there is no control there whatsoever.”

“I … gave them this advice, but they ignored it because the leaders (the activists) taking them made them believe that they were going to be able to do it, when in reality, it wasn’t like that,” said Father Solalinde.

Jorge Andrade, coordinator of a collective of Catholic-run migrant shelters, called the U.S. response “excessive.” In the spring, Andrade said caravan organizers “have good intentions, but they’re exposing (the migrants) to danger.”

“Unfortunately, there are groups (of migrants) there that want to cross the border under these circumstances,” he said in late November.

Father Andres Ramirez, who works with migrants in Tijuana, called the response “unprecedented” and said such a border closure as occurred Nov. 25 had not happened since the 9/11 terrorist attacks.

Father Solalinde has refused to accompany migrants farther north than Mexico City, saying the road poses risks such as kidnap. He recounted how one group of migrants, who were evangelicals, and told him: God will take care of us and “touch the heart” of president Donald Trump.

“They truly thought that God was going to move the heart of this person, but no! no! no! It wasn’t like that,” Father Solalinde said. He added that some in that group of 250 migrants had gone missing since setting out from Mexico City for Tijuana.

“They wouldn’t take into account the current political climate, the (Dec. 1 presidential) transition in Mexico, the bad organization that they had, because they didn’t see the opportunity for people to help them,” Father Solalinde said, speaking to the haste of many to rush to the border and not fully consider the opportunity to work in Mexico or apply for asylum there.

“These are difficult times (but) it’s as if they have this chip, ‘They have to go north’ and they think that it was going to be the same as the previous times, but it’s not like that.”

The Mexican government said in a Nov. 25 statement it had detained 98 migrants who were involved in scuffles with police and tried to cross the border at Tijuana.

It added more than 7,400 migrants from various caravans were currently in the border state of Baja California, while 11,000 migrants had been repatriated or deported to Central America since Oct. 19.

The Washington Post reported Nov. 24 the United States and Mexico’s incoming government had reached an agreement known as “Remain in Mexico,” in which asylum seekers would wait south of the border while their claims are processed in U.S. courts. Incoming Mexican Interior Minister Olga Sanchez Cordero later denied the story, but did not disavow her comments to the Post confirming a deal.

In effect, “Remain in Mexico is the configuration of Mexico as a safe third country,” said Andrade.

NEXT: Canadian bishops restore some funds to aid agency as study continues