Ecumenical partners can help one another be accountable, pastor says 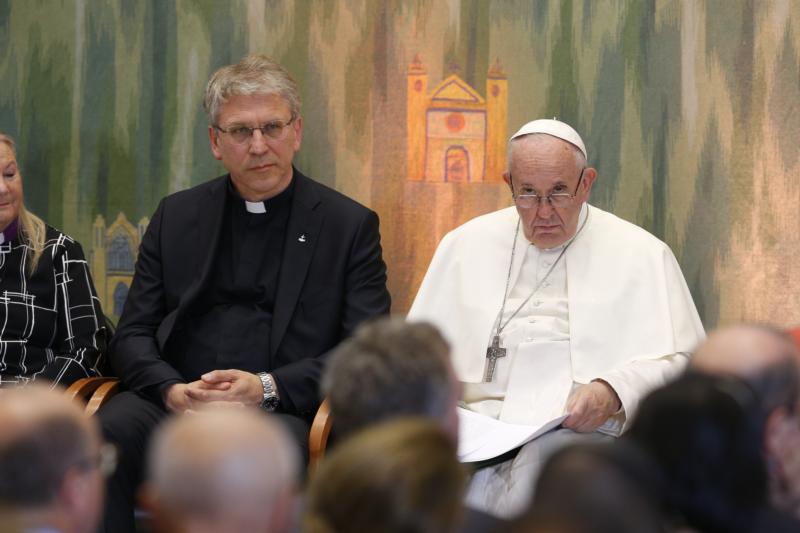 In this file photo, Pope Francis sits with the Rev. Olav Fykse Tveit, general secretary of the WCC, during an encounter at the World Council of Churches’ ecumenical center in Geneva June 21, 2018. (CNS photo/Paul Haring)

UPDATED – ROME (CNS) — As Christian communities and churches continue their search for full unity, they must be willing to learn from and help one another recognize ways they have not fully lived the Christian ideal, the head of the World Council of Churches said.

The Rev. Olav Fykse Tveit, a Norwegian Lutheran pastor and WCC general secretary, wrote his doctoral thesis on “mutual accountability” in the ecumenical movement and is the author of a book on the subject, titled “The Truth We Owe Each Other.”

He described mutual accountability as “a golden thread running throughout our ecumenical history,” one aimed at helping Christian leaders move beyond theological agreements toward “a radical openness and accompanying humility.”

Speaking Nov. 15 at Rome’s Centro Pro Unione, an ecumenical center run by the Franciscan Friars of the Atonement, the WCC helped launch a new program known as “MAD for Ecumenism.”

MAD stands for Mutual Accountability Desk and is the brainchild of Teresa Rossi, the center’s associate director. Tveit said accountability is an important tool in the current phase of ecumenical relations because it means that Christians not only learn about each other’s history and ways of worshipping but also are more willing to be challenged and changed by the insights of other churches and communities.

The Centro Pro Unione is marking the 50th anniversary of its foundation, which came after the Catholic Church’s seismic shift in relations with other Christian denominations during the Second Vatican Council. The center’s goal is to maintain that ecumenical momentum by bringing members of different churches together to learn from each other’s spiritual traditions.

In the inaugural lecture for the project, Tveit noted how, during his visit to the WCC in June, Pope Francis had said ecumenism meant “walking, praying and working” together, which “demands constant conversion.” For Tvieit, that also implies a “self-critical theology.”

Conversion and self-criticism, Tveit said, might mean recognizing that “the gift and blessings of ministry have been sometimes skewed into a patriarchal clericalism that can then be employed to facilitate abuse, or that my religious life has accommodated itself uncritically to nationalism or colonialism or demagoguery or economic powers.”

It also may mean recognizing the “shortcomings in how our shared Christian tradition has treated women and indigenous peoples,” and acknowledging that “the church itself, the body of Christ, is simply broader, more encompassing and inclusive, than my structures and strictures allow,” he added.

The new project is divided into modules and is available for use in schools, universities, parishes and seminaries. Groups would meet and study key questions together at the local level and report back to the Centro Pro Unione with the results of their activities. Their reports, reflections and best practices will then be compiled into a publication, which would be distributed for ecumenical formation.

The first module, running from November to February, is focused on preaching. Pastor Francis Agyei, the Rome-based pastor of Ghana’s Church of Pentecost, has teamed up with Franciscan Friar of the Atonement Father James Puglisi to exchange preachers and reflect on the lights and shadows of preaching within the Pentecostal and Catholic traditions.