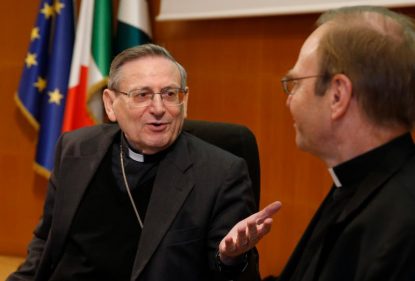 VATICAN CITY (CNS) — An unbalanced focus on the word “rights” without a primary focus on the word “human” can lead to situations where the interests of the powerful or the wealthy prevail over the good of all human beings, which is what the Universal Declaration of Human Rights attempted to promote, said the Vatican secretary of state.

Anticipating the 70th anniversary of the declaration in December, Cardinal Pietro Parolin, Vatican secretary of state, said the rights of all are threatened when human life is treated as “property” rather than as a gift and when the focus is only on an individual and not what is common to all human beings.

“Unfortunately, it is precisely the right to life that seems most exposed to the individualism that particularly characterizes Western society,” the cardinal said Nov. 15 at an international symposium sponsored by the Joseph Ratzinger-Pope Benedict XVI Foundation.

The right to life, recognized in Article 3 of the declaration, is “the true basis of all human rights,” he said.

Obviously, life is what all human beings have in common. Recognizing the existence of God, the creator of life, adds to the sense of life as a gift to be protected, he said, but even without faith a reasonable human being naturally knows that life is a value to protect.

The right to life and the declaration’s assertion of a right to be free of “cruel, inhuman or degrading treatment or punishment” motivates the Catholic Church’s efforts “on behalf of the universal elimination of the death penalty,” the cardinal said.

Looking at the history of the declaration, Cardinal Parolin acknowledged how late the Catholic Church was in coming to embrace the document; in 1963 St. John XXIII was the first pope to publicly praise the declaration in a papal document.

Previously, the cardinal said, the church insisted that “real human rights consisted in obeying, according to the dictates of the church, the obligations instilled by natural and divine law.”

The Second Vatican Council formally recognized the right to religious freedom for all people, not just Catholics, and opened the way for the Catholic Church to become one of the strongest, most consistent proponents of human rights globally, he said.

However, Cardinal Parolin said, “where ‘rights’ are promoted that the church holds to be incompatible with divine law or natural law, which can be known through the use of reason, the Holy See does not cease raising its voice in defense of the human person.”

Mary Ann Glendon, a professor at Harvard Law School, told the conference that the 70th anniversary of the declaration “takes place amid a rising tide of skepticism that threatens to engulf the very idea of universal rights.”

Much of the November symposium focused on discussing which rights are “fundamental” and belong to all people and which are relative rights or even fake “rights” that, when granted, prevent others from enjoying their fundamental rights, particularly the right to life.

“That is why the framers of the universal declaration deliberately stuck to a small core of fundamental principles that were deeply rooted in the world’s major philosophical and religious traditions and remained silent on many contentious matters, including abortion,” Glendon told the conference.

“The framers,” she said, “settled on a small core of rights so fundamental that no nation would openly oppose them.”

People should remember, she said, that “the men and women who brought the human rights project to life (in 1948) were not starry-eyed idealists. Nearly all of them had lived through two world wars and severe economic crises. The events of their times had shown them human beings at their best and worst.”

To strengthen recognition of the universal declaration and its application globally today, Glendon suggested people once again “stick to basics” with fundamental rights, accept there will be “a pluralistic approach” to implementing them, recognize that the rights in the declaration are intertwined and work from the principle of subsidiarity.

Applied to human rights, she said, the principle would mean encouraging “the building of a rights-respecting culture from the bottom up,” recognizing that “human rights are just words on a piece of paper until they take root in habits and attitudes nurtured in human communities and institutions.”

Then, she said, international agencies and human rights organizations would be asked to focus on the most serious, widespread rights violations, such as genocide, torture, the forced transfer of populations and the denial of religious freedom.

PREVIOUS: Ecumenical partners can help one another be accountable, pastor says