Haitians remember past abuses in effort to avoid repeating them 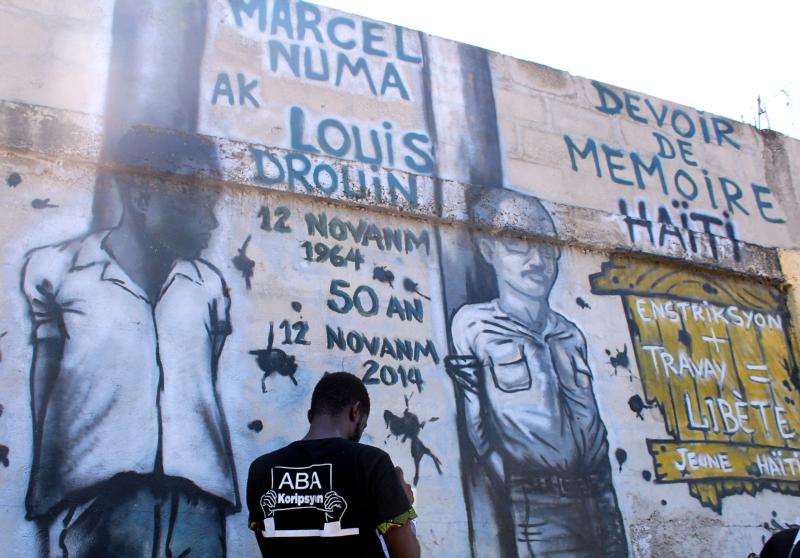 A young man lights a candle to remember the 13 members of the Jeune Haiti insurgent movement. The cemetery wall mural commemorates those executed. (CNS photo/Mary Durran)

PORT-AU-PRINCE (CNS) — As human rights organizations commemorated the 1964 execution of two young dissidents during the regime of Francois “Papa Doc” Duvalier, a priest spoke out for the first time about the incident.

Louis Drouin, 31, and Marcel Numa, 21, were part of the insurgent Jeune Haiti (Young Haiti) guerrilla movement that sought to overthrow Duvalier, five months after he proclaimed himself president for life. Thirteen members of Jeune Haiti landed on Haiti’s southwest coast in August 1964, echoing the famous 1956 landing in Cuba of the Granma yacht that launched the Cuban revolution. Most of the 13 were killed in combat, but Drouin and Numa, two childhood friends from the southwestern city of Jeremie, were captured and taken to Port-au-Prince, to be publicly executed at the cemetery Nov. 12, 1964.

In early November, Father Marcel Menard, a French member of the of the St. James Fathers, affirmed that, contrary to historical accounts that Drouin and Numa refused the last rites, he heard the confessions of the two condemned men hours before they were executed.

In a post on the Facebook page on the Devoir de Memoire Foundation (Duty to Remember), Father Menard explained: “I went to meet Drouin and Numa very early, wanting to be sure I got there before the TV and the photographers. I gave absolution to both of them. Then I left, wishing to avoid being used as propaganda by the regime.”

On his return to the rectory, a military officer came to tell the priest that the condemned men were asking to see him. The priest affirmed he had already offered the last rites to the two men, but nonetheless, accompanied the military officer. On arrival, a crowd had gathered, waiting for the public execution. Father Menard asked the men if they had asked to see him again, and they shook their heads.

“The gesture of shaking their heads has gone down in history as their refusal of the last sacrament. But it was a misinterpretation,” Father Menard wrote in the detailed statement.

The execution of the two condemned men by firing squad at the entrance to the Port-au-Prince cemetery was filmed and aired repeatedly on radio and TV for the next few days.

This past Nov. 11, Holy Cross Father Michelet Germain prayed for the repose of the souls of Drouin and Numa on the site where they were executed. A mural has been painted on the wall next to the spot of the execution.

“They fought for a better Haiti, for the rights of all Haitians, and we must not forget them,” said Marie Marguerite Bouchereau Clerie, president of the Devoir de Memoire Foundation. The organization wants past crimes against humanity perpetuated under the Duvaliers — Papa Doc and Baby doc — to be investigated and the facts made public, and for the period to be studied in the school curriculum.

“Young people must be taught about this dark period in our history, so it is never repeated again,” she said.

“The corruption we are seeing today is not new, it goes back to the Duvaliers,” said Bouchereau Clerie. “The funds they stole could have funded schools, parks and all the facilities we lack today.”

“If their corruption and abuses had been punished back in the day, things would be very different today in Haiti.”