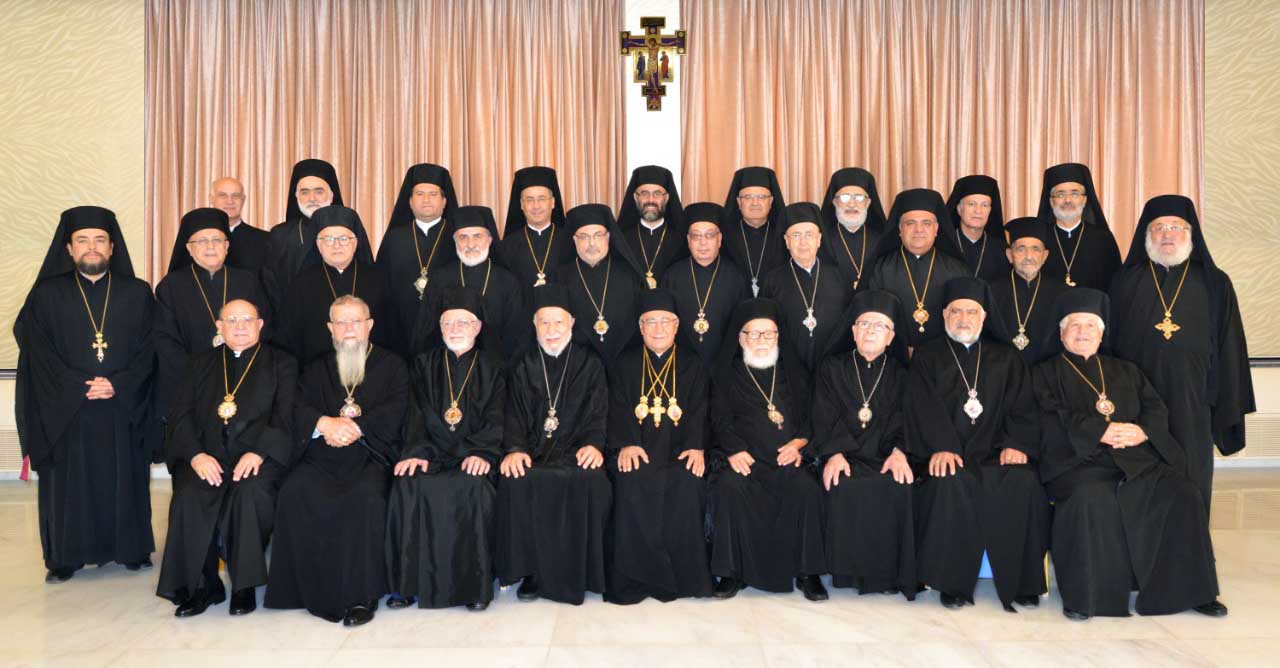 Melkite Catholic bishops from around the world are seen Nov. 7 for their synod in Rabweh, Lebanon under the leadership of Patriarch Joseph Absi (seated center). (CNS photo/courtesy Melkite Catholic Synod)

BEIRUT (CNS) — Melkite Catholic bishops from around the world, meeting for their synod, criticized the deteriorating situation in the Palestinian territories and rejected of Israel’s Nation State Law.

In a final statement following their Nov. 5-10 synod in Rabweh, Lebanon, the bishops underscored “the seriousness of the oppression and the violation of the rights of innocent citizens” in the Palestinian territories and called upon “stakeholders to find the best ways to stop the tragedy of the Palestinian people.” The bishops appealed to the Palestinians “to unite their forces in the face of the new reality that is intended to be imposed on them.”

The bishops also rejected the Nation State Law passed by the Israeli Knesset July 19. The law limits the promotion and protection offered by the State of Israel to “Jewish citizens of the state of Israel.”

In their statement, the bishops said they support the position taken by Assembly of Catholic Ordinaries of the Holy Land. That group’s Oct. 31 statement said: “We must draw the attention of the authorities to a simple fact: Our faithful, the Christians, our fellow citizens, Muslim, Druze and Baha’i, all of us who are Arabs, are no less citizens of this country than our Jewish brothers and sisters.” That statement, signed by 25 prelates representing the Latin, Armenian, Melkite, Chaldean, Maronite and Syriac churches, called on Israel to rescind the law.

Addressing the general situation in the Middle East, the Melkite bishops voiced concern about “the deteriorating economic situation that makes most people suffer under the problem of poverty and need.” They warned that such an atmosphere can be used “by those with influence and power to continue to control people in need.” The bishops appealed “to those concerned — wherever they may be — to work for the lifting of social injustice and the achievement of justice, in the interests of humanity and for the preservation of dignity.”

Regarding Lebanon, the Melkite bishops expressed their concern about the delay in the formation of a new government as the country’s rival political parties have yet to reach consensus since parliamentary elections in May. The bishops urged all parties “to put narrow interests aside and cooperate to speed up the formation of a government in order to mitigate the adverse negative effects of the delay at all levels.”

As for neighboring Syria, the bishops expressed their satisfaction “at the decline in fighting in most areas” in the country, the establishment of security and safety, the start of reconstruction and the return of refugees to their homes. They renewed their determination “to pursue the work of the church in order to alleviate the suffering of their children at all levels.”

PREVIOUS: Haitians remember past abuses in effort to avoid repeating them