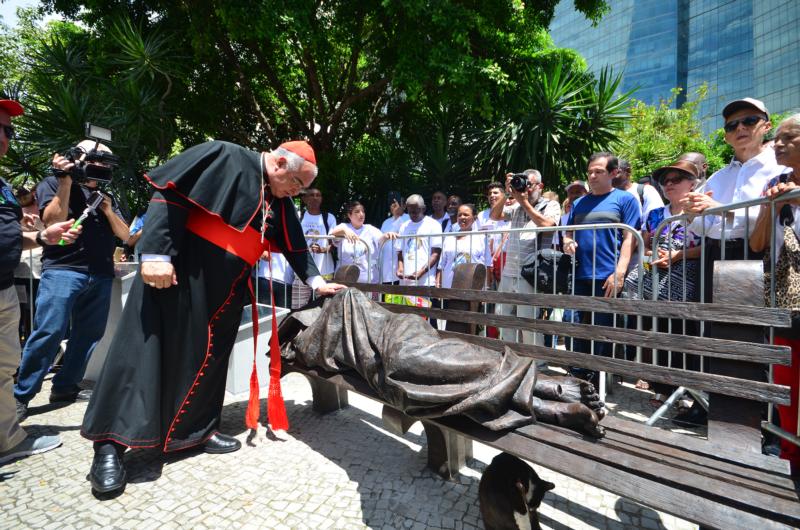 The sculpture was donated to the archdiocese by Canadian artist Timothy Schmalz and was placed outside Metropolitan Cathedral.

“Humanity has never produced so much wealth and has never seen such poverty,” Cardinal Tempesta wrote during the weeklong events. “Terrible as it may seem, a certain portion of the population simply does not count, for the economy can survive without it. Excluded are the masses.”

The gift of the statue to the city of Rio de Janeiro was made possible by the Brazilian Embassy to the Holy See and the Knights of the Holy Sepulcher.

In the life-sized image, made in bronze, Jesus appears lying on a bench, with a blanket over his body and his bare feet uncovered. Visitors to the cathedral quickly recognized the figure of Jesus due to his feet, where it is possible to see the marks of the nail holes that would have pinned him to the cross.

“The sculpture makes us look at those who live on the streets of our city as brothers and sisters; Pope Francis asks us to see Christ in the figure of the poor who live on our streets,” the cathedral’s parish priest, Father Claudio Santos, explained to reporters.

The original sculpture produced by Schmalz was installed in Toronto in 2013. Since then, copies have been installed in Dublin and Rome, as well as in several U.S. cities, including Davidson, North Carolina; Chicago; and Austin, Texas.

NEXT: Pope changes date of World Day of Migrants and Refugees to September