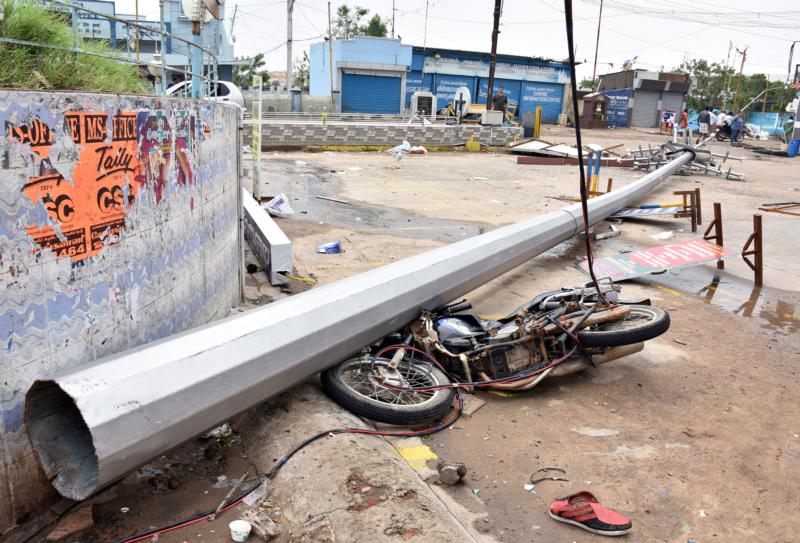 Street damage is seen in Velankani, India, Nov. 16 after Cyclone Gaja hit the region that same day. More than 40 people were killed and some 82,000 displaced in state-run relief camps. (CNS photo/Stringer, Reuters)

Street damage is seen in Velankani, India, Nov. 16 after Cyclone Gaja hit the region that same day. More than 40 people were killed and some 82,000 displaced in state-run relief camps. (CNS photo/Stringer, Reuters)

NEW DELHI (CNS) — A cyclone killed more than 40 people and displaced hundreds of others in southern India, severely damaging farmland and buildings, including the region’s most revered Marian shrine.

Officials said at least 46 people were killed and more than 100,000 displaced when their thatched homes were blown away by strong winds and driving rain that hit coastal areas early Nov. 16, when Gaja made landfall.

“More than 122,000 people have been evacuated and are in 351 relief camps, while rescue teams are helping others in villages, cut off by the storm,” said John Arokiaraj of Caritas India, the Catholic Church’s social action arm in the region.

He said at least 10,120 houses were destroyed and another 5,770 partially damaged, while 1,300 fishing boats and other fishing gear were damaged. Livestock, crops and coconut trees also were destroyed, he said.

“The livelihoods of our people are destroyed when their fishing equipment or livestock and farmlands were destroyed,” said John Zachariah, Thanjavur diocesan chancellor.

More than 30 churches, including the Basilica of Our Lady of Good Health at Velankanni, some 60 chapels and 15 schools also were damaged in the cyclone, he said.

Father A.M.A. Prabhakar, rector of the Marian shrine, said the storm blew a cross off one of the shrine’s two towers.

The shrine, a pilgrim center since the 16th century, attracts some 20 million people a year. Church officials said some 3 million of them visit during an 11-day annual festival that concludes Sept. 8, which Catholics celebrate as Mary’s birthday.

Despite the damage, hundreds of people were taking shelter in the buildings within the shrine compound, and 15 other Catholic parishes were providing shelter and assisting people, church officials said.

“Caritas India is assessing the damage and will begin immediate relief intervention as soon as possible,” said a statement from Bishop Theodore Mascarenhas, secretary-general of the Catholic Bishops’ Conference of India.