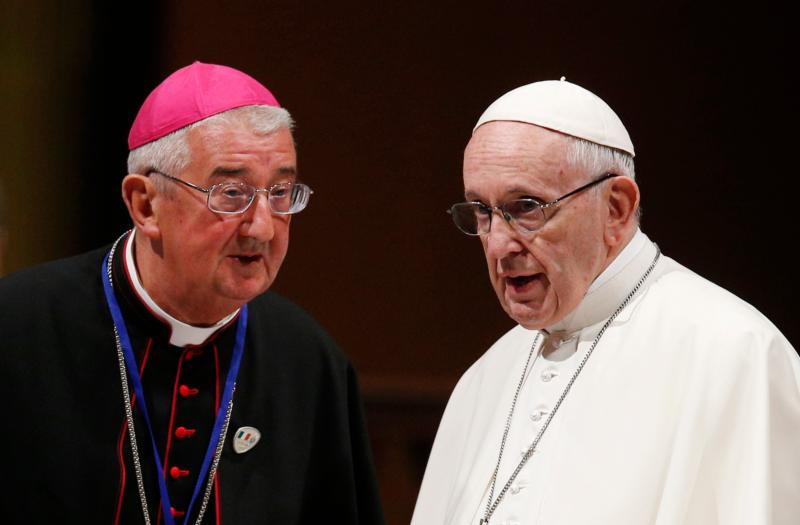 KILKENNY, Ireland (CNS) — Dublin Archbishop Diarmuid Martin warned there was “a danger of complacency or inertia or of slippage into false confidence” in the church’s fight against clerical abuse.

Addressing the annual National Child Safeguarding Conference in Kilkenny in late October, the Dublin archbishop told safeguarding delegates from dioceses, parishes and religious orders across Ireland that, with renewed focus on worldwide abuse this summer, people with whom the church had been in contact years ago got back in touch.

“The wounds of the past had been reopened and they were asking for support, assistance and the reassurance that we still viewed their complaints with the same seriousness as we did when we first heard them,” Archbishop Martin said at the conference.

The archbishop paid tribute to abuse survivors, including Marie Collins, who resigned from the Pontifical Commission for the Protection of Minors in March 2017 over curial resistance to reform. He said in internal church culture, survivors often were looked on as being “difficult.”

Father Joe McDonald, a Dublin parish priest abused as an 8-year-old alter server, also addressed the conference on the need for a compassionate church. Father McDonald was one of the survivors who met Pope Francis at the Vatican embassy in Dublin in August.

Speaking of the February meeting between Pope Francis and the presidents of bishops’ conferences from around the world to discuss clerical abuse, he urged the Vatican to invite every bishop to bring two guests with them “who could be male or female, ordained or nonordained” and even “a victim and a perpetrator.”

He stressed that the meeting in Rome “will be the poorer if it takes place without Archbishop Diarmuid Martin. He has walked a very specific journey and he has paid a high price for it — I think he has been heroic in that regard.”

Archbishop Martin is widely credited with pushing for sweeping changes in the area of safeguarding within the Irish church and for giving victims of clerical abuse a supportive listening ear. He was prepared to make 80,000 files available to the Murphy Commission, which investigated the Archdiocese of Dublin’s mishandling of allegations of abuse. That almost resulted in a High Court action against him by his predecessor, Cardinal Desmond Connell.

The first chief executive of the Church’s National Board for Safeguarding Children, Ian Elliot, said in an Interview with the Irish Times in August that Archbishop Martin had the courage of his convictions.

“He was prepared to be unpopular, he was prepared to say ‘this is not right, it should not be happening’ … I always felt he had the best interests of children and young people at heart,” Elliot said.

As the president of the Irish bishops’ conference, Archbishop Eamon Martin of Armagh, Northern Ireland, will represent the Irish church at the Rome meeting. However, there have been calls for Archbishop Martin to be included.

In his homily at a Mass for the safeguarding conference, Bishop Dermot Farrell of Ossory said complaints that were mishandled or ignored “show how much the church’s attitude and that of her leaders needs to change.”

If report findings into the handling of allegations of abuse had been acted upon in a timely manner, “rather than denying or covering up the abuse and silencing of victims to prevent scandal,” it would have prevented others from being sexually abused, said Bishop Farrell, a former president of the national seminary in Maynooth.

Teresa Devlin, CEO of the National Board for Safeguarding Children in the Catholic Church in Ireland, told Catholic News Service that when an allegation is made against a priest, “it goes to Rome and sits there for two years; that’s not justice for anybody. I think Rome needs to review how they manage these cases.”

Devlin referred to the disparity between the large number of allegations of clerical abuse made and the small number of convictions and said, “We cannot reply on civil law to manage this.”

“The law within the church is moral certainty, that there is a case to answer, which is a much lower threshold. That enables the prosecution within the canonical process to ensure that the person doesn’t not have access to children again.”

The conference also heard from the sister of an Irish priest jailed for abuse overseas. She told delegates about the impact on the families of perpetrators and the sense of isolation and shame.

Speaking anonymously, the woman said, “I have never met another family member in my situation,” yet she stressed that there were other families who found themselves in this dilemma. “Who are they and where are they?”

She indicated that she would be willing to get involved in setting up a support group for people who find themselves in this situation, and she urged church official to reach out to such people and not to be afraid to offer help.