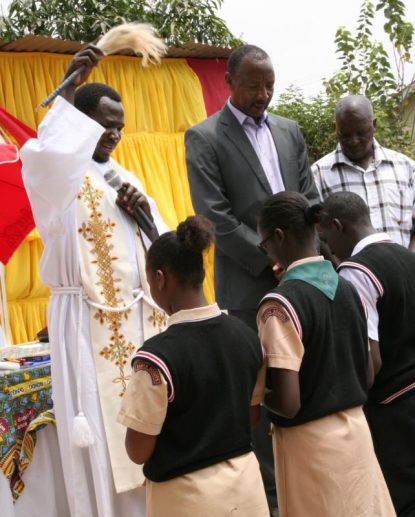 NAIROBI, Kenya (CNS) — Catholic leaders applauded a presidential order requiring education ministry officials to return to churches all of the schools that religious denominations surrendered to the government five decades ago.

President Uhuru Kenyatta Nov. 13 said he had given government officials one week for the restoration of the schools’ ownership to churches, to return the land they occupy and for the re-establishment of full church sponsorship of the institutions.

Kenyatta announced the order at the funeral of retired Archbishop John Njenga of Mombasa, who died Nov. 4 in Nairobi while undergoing medical care.

The late archbishop was interred at the Holy Family Minor Basilica in Nairobi, becoming the first bishop to be laid to rest inside the church.

“There are a lot schools sponsored and built by the church,” Kenyatta said, adding, “I want you (Ministry of Education) to ensure that you restore that sponsorship.”

Kenyatta’s order comes amid persistent calls for more church involvement in schools, which have experienced strikes and violence including the torching of some buildings.

“We welcome the directive. We see it as a good move. The church will take its special role in the school as it used to be,” Bishop Philip Anyolo of Kisumu, president of the Kenya Conference of Catholic Bishops, told Catholic News Service.

“The state should respect what the church has done in past and work together as partners, not as competitors,” Bishop Anyolo added.

Kenyatta said that while the church and state must be separate, the two can be interdependent and work together as they did in earlier days.

“We need to get to back to the level where church-sponsored schools must be allowed to mentor our children,” he said.

“If we have any reason to say so, look at what is happening in our schools. Look at the level of indiscipline. … Look at some of the activities where our school children are taking upon themselves to burn schools. It tells you that there is something missing in their lives,” he said.

Early missionaries started the schools, bringing a large segment of country’s education under the management of the churches by the time Kenya became a colony of Great Britain in 1920. They built schools, financed them, trained and recruited teachers and approved new teaching approaches.

After independence from Britain in 1963, a government education commission recommended changes. The 1968 Education Act mandated the government takeover of schools formerly owned and managed by the missionaries.

Kenyan educators maintained the move was made to nationalize education so that secular curriculums could be taught in religious schools, children from all backgrounds could get admission and professional teachers could be assigned to the institutions.

“We were inside, but somehow we were pushed out. Some Catholic schools are headed by chairman who are not Catholic. Many schools land title deeds have also been changed,” said Father Henry Ndune, education secretary in the Mombasa Archdiocese.

NEXT: Catholic, international aid agencies press for end of war in Yemen