Love for Christ is shown in love for poor, suffering, pope says 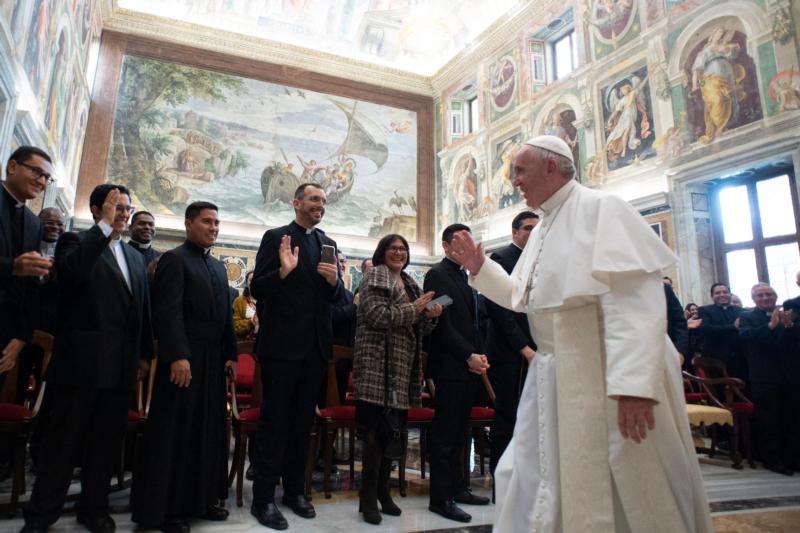 Pope Francis greets students and faculty of the Pontifical Latin American College during an audience at the Vatican Nov. 15. (CNS photo/Vatican Media)

VATICAN CITY (CNS) — Christians in Latin America must hold fast to their traditions, which are rooted in love for Christ and especially in remaining close to the marginalized and downtrodden, Pope Francis said.

“Our continent has succeeded in giving shape to a reality in its tradition and in its memory: the love for Christ and of Christ can only manifest itself in passion for the life and destiny of our peoples and in special solidarity with the poorest, the most suffering and needy,” the pope said Nov. 15 to students and faculty of Rome’s Pontifical Latin American College.

Commemorating the 160th anniversary of the pontifical college’s founding, the pope said its “Latin Americanized” character helps its students and staff confront the challenges facing their continent from the ideological colonization that threatens to “uproot our cultures from their richest and most indigenous traditions.”

The Pontifical Latin American College, he said, can help create a priestly community based on solidarity “that transcends what is merely ‘parochial’ and lead communities that know how to open themselves to others in order to weave and nurture hope.”

“A priest in his parish, in his diocese, can do a lot — and that is good — but he also runs the risk of burning himself out, of isolating himself or harvesting only for himself,” the pope said.

Without a sense of belonging to a community, he continued, priests risk dispersing, weakening and depriving “so many of our brothers and sisters of the strength, light and comfort of a friendship with Jesus Christ and of a community of faith which gives a horizon of meaning and life.”

Pope Francis encouraged the students and staff to look to their alumni, including the recently canonized archbishop of San Salvador, St. Oscar Romero, who is “a living sign of the fruitfulness and sanctity of the Latin American church.”

St. Romero was “a man rooted in the word of God and in the heart of his people,” he said. “Do not be afraid of holiness and spending your life for your people.”

He also called on them to look to Mary to rescue them “from the paralysis or confusion of fear.”

“Let’s not forget her and let us confidently ask her to show us the way, to free us from the perversion of clericalism, to make us more and more ‘shepherds of the people’ every day and not to allow us to become ‘clerics of the state,'” he said.

NEXT: Universal declaration at 70: Defending human rights is ongoing challenge