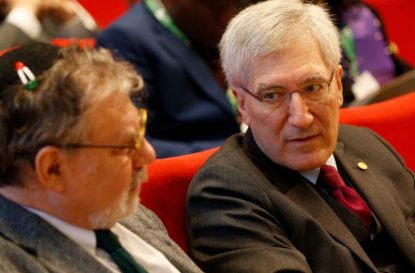 Robert George, a professor at Princeton University in New Jersey, talks with Joseph Halevi H. Weiler, a professor at New York University, during a conference on the Universal Declaration of Human Rights in Rome Nov. 15. (CNS photo/Paul Haring)

VATICAN CITY (CNS) — Since St. John XXIII, every modern pope has celebrated the Universal Declaration of Human Rights as a recognition of God-given human dignity and as a foundational document for a world where everyone can live in peace.

The universal declaration, Pope John said in 1963, is “a solemn recognition of the personal dignity of every human being; an assertion of everyone’s right to be free to seek out the truth, to follow moral principles, discharge the duties imposed by justice, and lead a fully human life.”

As the international community prepared to mark the 70th anniversary of the declaration Dec. 10, the Joseph Ratzinger-Pope Benedict XVI Foundation invited international experts to Rome to discuss the document and the foundations of universal human rights, a frequent topic in the writings of Pope Benedict.

Much of the retired pope’s writings on the topic and much of the discussion at the meeting Nov. 15-16 explored: What does the term “rights” mean in today’s world? Which rights are “fundamental” and belong to all people and which are relative rights or even “rights” claimed as such, but which in reality prevent others from enjoying or exercising their fundamental rights?

In a message to symposium participants, Pope Francis said it is right to celebrate the 70th anniversary of the declaration, “which aimed to remove the walls of separation dividing the human family and to promote integral human development.”

But, he said, it also is important to explore the “authoritative” teaching of Pope Benedict on the topic, especially with “the multiplication of ‘new rights’ that often conflict with one another.”

The retired pope, in a brief note, said he thought it was particularly important to “speak explicitly of the ‘multiplication of rights’ and the risk of the destruction of the idea of right.”

Pope Francis had anticipated the anniversary in January, dedicating to the 70th anniversary his formal speech to diplomats accredited to the Holy See.

Seven decades after the creation of the universal declaration, Pope Francis said, “it is painful to see how many fundamental rights continue to be violated today. First among all of these is the right of every human person to life, liberty and personal security.”

War, violence and abortion all infringe on these rights, he said.

Not only are innocent unborn children discarded because they are “ill or malformed, or as a result of the selfishness of adults,” the elderly are often cast aside especially when they are infirm, he said.

Ultimately, protecting the right to life means working for peace, he said, because “without peace, integral human development becomes unattainable.”

Freedom of association, the right to health, education and work, the right to rest and leisure and the right to marry and form a family also are included in the universal declaration.

For the Catholic Church, Pope Francis said, “to speak of human rights means above all to restate the centrality of the human person, willed and created by God in his image and likeness.”

But, he said, the declaration is universal because “those rights are premised on the nature objectively shared by the human race,” regardless of sex or creed or race.

Pope Benedict, marking the 60th anniversary of the declaration during a 2008 speech at the United Nations, made the same point, but using more traditional Catholic language: the rights, he said, “are based on the natural law inscribed on human hearts and present in different cultures and civilizations.”

St. Paul VI, St. John Paul II, Pope Benedict and Pope Francis all insisted there is an essential connection between the rights in the universal declaration and the ability of all human beings to recognize them as rights.

But the past four popes have said the same cannot be true for “new rights,” such as the “right to choose” an abortion. They all emphasized the universal declaration was a recognition of rights that went hand in hand with being human; they are not rights granted by the law and, as the declaration itself said, they cannot be removed by law without just cause.

St. John Paul marked the 50th anniversary of the declaration in 1998 with a letter to the U.N. General Assembly; he called the declaration “one of the most precious and important documents in the history of law” and insisted it “associates every right with other rights, duties and limits required by an equitable social order.”

PREVIOUS: Love for Christ is shown in love for poor, suffering, pope says

NEXT: In Vietnam, nuns’ wheelchair ministry frees people to make a living