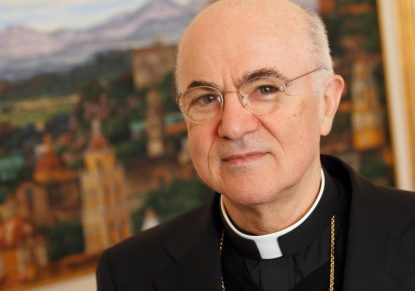 ROME (CNS) — A civil court in Milan ordered Archbishop Carlo Maria Vigano, a longtime diplomat and former Vatican nuncio to the United States, to return close to 2 million euro plus interest and legal fees to his brother Father Lorenzo Vigano.

After their father’s death in 1961, the archbishop managed both their inheritances, which amounted to millions of dollars in real estate and bank deposits.

Father Vigano, a biblical scholar and priest of the Italian Diocese of Pavia who resides in Chicago, won the lawsuit against his brother the archbishop, who has been ordered to hand over 1.8 million euro ($2 million) plus interest and legal fees. The priest has initiated several lawsuits against the archbishop, and while many charges have been dismissed, this was the first to end with a ruling.

Archbishop Vigano has been in the international press after calling on Pope Francis to resign because, he claimed, the pope had known about Archbishop Theodore E. McCarrick’s alleged abuse and failed to act.

The archbishop also had a falling out with his sister Rosanna who had turned to Swiss authorities for help in retrieving money — reportedly more than half a million dollars — she had given the archbishop in the 1970s to deposit in a Swiss bank.

In a complaint filed with Swiss prosecutors in 2012, Rosanna Vigano said she was aware some of her money had been used to purchase an apartment in 1983 with the deed in the archbishop’s name, but she found out in 2012 that the property had been sold without her knowledge and claimed the archbishop kept the money from the sale for himself.

The lawsuit was dropped after the archbishop returned $11,000 to the sister and made a $180,000 payment in 2014 through the sister’s lawyer, who in turn donated the sum to a religious hospital in Tanzania where one of Rosanna’s daughters had been working.