Plenty of weapons, lack of safe water is a ‘disgrace,’ pope says 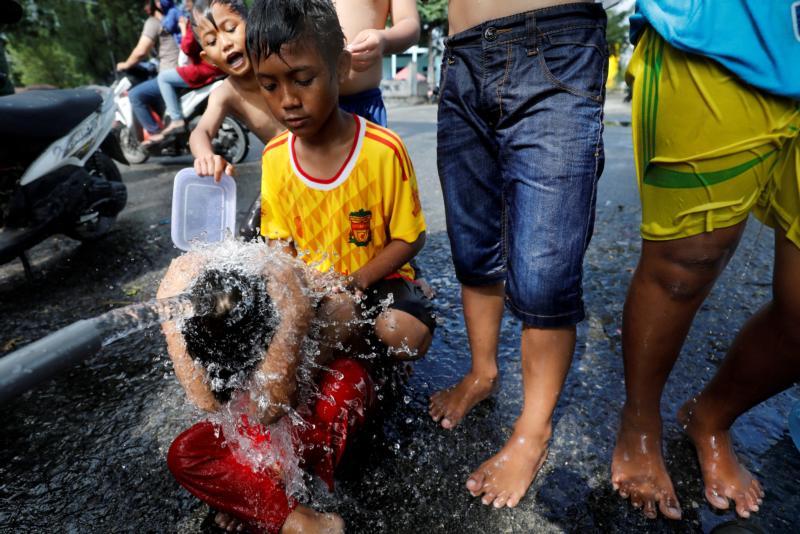 Children use a water pipe to bathe Oct. 11 at a camp for displaced people in Palu, Indonesia. An earthquake and tsunami struck the region Sept. 28, killing more than 2,000 people. (CNS photo/Darren Whiteside, Reuters)

VATICAN CITY (CNS) — It is a horrible disgrace that in the 21st century, millions of people still do not have access to clean drinking water and so many become ill or die from contaminated water sources, Pope Francis said.

“Unfortunately, in many countries where people do not have normal access to safe drinking water,” what is not lacking “is the supply of weapons and ammunition, which continue to deteriorate the situation,” the pope said in a message published Nov. 8.

“The corruption and special interests of an economy that excludes and kills too often prevails over efforts that, in solidarity, should guarantee access to water,” he wrote.

The pope’s written message was addressed to an international conference on the need for better governance in guaranteeing access to drinkable water for everyone. The conference, held Nov. 8 in Rome, was organized by the Dicastery for Promoting Integral Human Development, in collaboration with the embassies to the Holy See of the United States, France, Italy and Monaco.

Some 844 million people do not have basic drinking water service and, of those, about 263 million people must spend more than 30 minutes per trip to collect water. Nearly 160 million people still drink untreated water from surface water sources, such as streams or lakes. Such conditions put people’s health — and especially the health of young children — at risk for disease, according to the report.

In his message, the pope said water cannot be viewed as just another commodity; the church and the Vatican have always recognized access to safe drinking water as a basic right for all people.

“Water is fundamental for life,” he wrote. But so many people are unable to have a decent life because they lack access to clean water, he added.

“The dramatic statistics” concerning drinking water, “especially the situation of those people who get sick and often die because of contaminated water, is a terrible disgrace for 21st-century humanity,” he wrote.

The current situation calls for “will and determination” and “unfailing” institutional, organizational, educational, financial and technological efforts, he said.