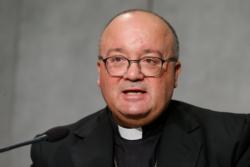 VATICAN CITY (CNS) — Pope Francis named Archbishop Charles Scicluna of Malta, arguably the Catholic Church’s most respected abuse investigator, to be adjunct secretary of the Congregation for the Doctrine of the Faith.

Announcing the appointment Nov. 13, the Vatican press office said the archbishop would continue to serve simultaneously as head of the Malta Archdiocese. “To fulfill the duties entrusted to him by Pope Francis, Archbishop Scicluna will travel to Rome on a regular basis,” said a note on the archdiocese’s website.

Archbishop Scicluna is expected to have a key role in the organization of a meeting in February on child protection that Pope Francis has asked all presidents of national bishops’ conferences to attend.

The 59-year-old archbishop, who holds a doctorate in canon law, worked at the doctrinal congregation for 10 years as the “promoter of justice” — a position similar to prosecuting attorney — dealing with cases of alleged clerical sexual abuse.

But even after being named auxiliary bishop of Malta in 2012, he continued to be the person the pope would call on to investigate high-profile cases of abuse, consolidating a reputation for treating victims with compassion and respect, and for insisting church officials respond to allegations clearly.

He generally is credited with consolidating the cases against Legionaries of Christ founder Father Marcial Maciel Degollado and Scottish Cardinal Keith O’Brien and, most recently, for convincing Pope Francis to take measures against several bishops in Chile.

Archbishop Scicluna also serves as president of the doctrinal congregation board that reviews appeals filed by priests laicized or otherwise disciplined in sexual abuse or other serious cases.

Although born in Toronto, he has lived in Malta since he was a year old. He did his university and seminary studies in Malta and was ordained to the priesthood in 1986.

During the Synod of Bishops in October, reporters asked Archbishop Scicluna about the state of discussions regarding the need for greater accountability of bishops in handling abuse cases. He said accountability would be a topic at the world meeting on abuse prevention the pope called for Feb. 21-24.

NEXT: Pope Francis to visit Morocco in March