Pope to scientists: Help protect health of planet and its people 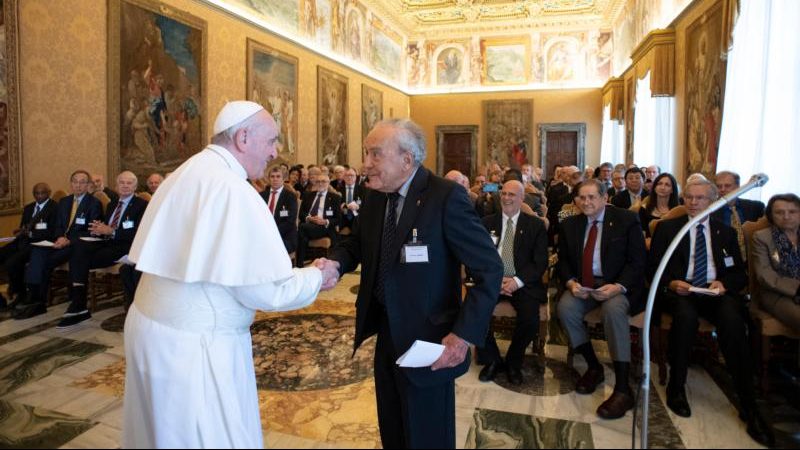 Pope Francis greets Swiss microbiologist Werner Arber during an audience with participants attending the plenary meeting of the Pontifical Academy of Sciences at the Vatican Nov. 12. (CNS photo/Vatican Media)

VATICAN CITY (CNS) — Scientists worldwide must serve humanity and the health of the planet, which means they must also propose viable solutions to problems and persuade government leaders and policymakers to implement them, Pope Francis said.

Answers to many world problems exist, he said, so what is lacking is the desire and political will “to halt the arms race and to put an end to war,” to switch to renewable energy as a matter of urgency, to guarantee water, food and health for all people, and “to invest for the common good the enormous capital” lying dormant in tax havens.

The pope spoke Nov. 12 to members and experts invited to the plenary session of the Pontifical Academy of Sciences. The academy was meeting Nov. 12-14 to discuss the importance of all scientific fields and how scientists should engage more with society and leaders, particularly in guiding policy and debunking fake news.

The scientific community is a part of society and must not consider itself to be “separate and independent,” the pope said. “Indeed, it is called to serve the human family and its integral development.”

Some of the most urgent challenges scientists can address, he said, include “the immense crisis of climate change” that is unfolding and the threat of nuclear weapons.

Reiterating the appeals of his predecessors, Pope Francis also called for the elimination of nuclear arms and asked that “scientists actively cooperate to convince government leaders of the ethical unacceptability of such weaponry because of the irreparable harm that it causes to humanity and to the planet.”

“Global changes are increasingly influenced by human actions. Hence there is also a need for adequate responses aimed at protecting the health of the planet and its inhabitants,” the pope said.

The state of the earth is being “put at risk by all those human activities that employ fossil fuels and deforest the planet,” he said. “Just as the scientific community has made progress in identifying these risks, it is now called to propose workable solutions” and to convince communities and their leaders to implement them.

There is much to do in achieving sustainable development that benefits all people, he said.

But ending hunger, thirst, poverty and high mortality rates among the 8 million people who are in need and “excluded” will never come about without a change in people’s lifestyles, he said.

Speaking to the scientists on behalf of all the voiceless and those who rarely benefit from scientific achievement, the pope asked that their work benefit everyone, so all people can have access to proper nutrition, water, health and education.

He also asked that they help guide national policies and economies so they truly aim to serve the common good and respect of the planet.

PREVIOUS: Archbishop: Irish actions in WWI should be impetus for today’s leaders

NEXT: Caribbean counselors troubled by increase in suicide among young people