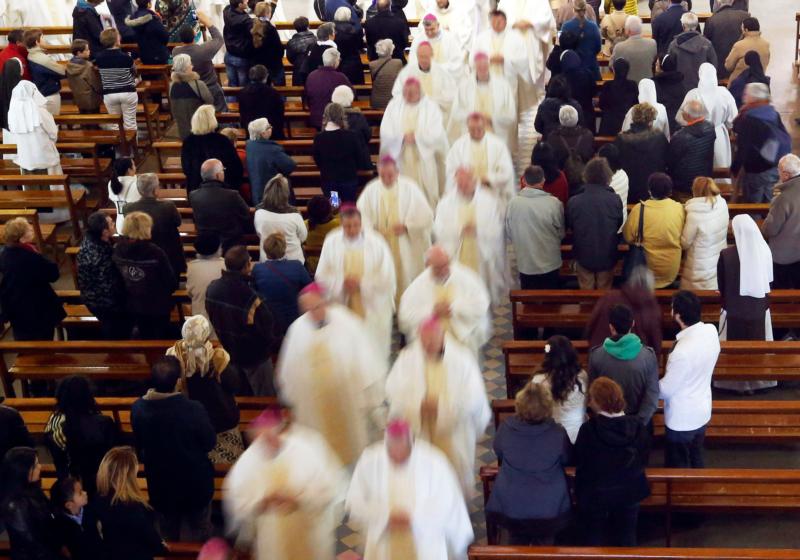 French bishops leave the Basilica of the Rosary in Lourdes after a 2016 Mass during the French bishops’ conference. Pope Francis encouraged bishops in France to be determined in their fight against child abuse and implement “zero tolerance” against known abusers. (CNS photo/Regis Duvignau, Reuters)

VATICAN CITY (CNS) — Pope Francis encouraged bishops in France to be determined in their fight against child abuse and implement “zero tolerance” against known abusers.

The pope said he hoped their “welcoming and listening to victims” would strengthen their “determination in the implementation of zero tolerance and your work,” said Cardinal Pietro Parolin, Vatican secretary of state, in a message sent to the bishops of France.

The cardinal’s message was sent on occasion of the bishops’ plenary assembly, Nov. 3-8 in Lourdes. The message, written in French, was read to the assembly Nov. 5 and published on the bishops’ conference website Nov. 6.

The cardinal expressed the pope’s assurances of his prayers and spiritual closeness to the bishops for their gathering.

Given the current context, which has been made more “difficult, especially because of the serious offenses committed by certain members of the church, the Holy Father encourages you to persevere in your fight against pedophilia” without forgetting “to recognize and support the humble fidelity” of so many priests, religious and consecrated men and women, and lay faithful.

The pope asked that their determination in their efforts and in implementing zero tolerance be strengthened by “welcoming and listening to victims, whose wounds will never have a ‘prescription'” — a word which can also mean a “statute of limitations” as well as a medical prescription.