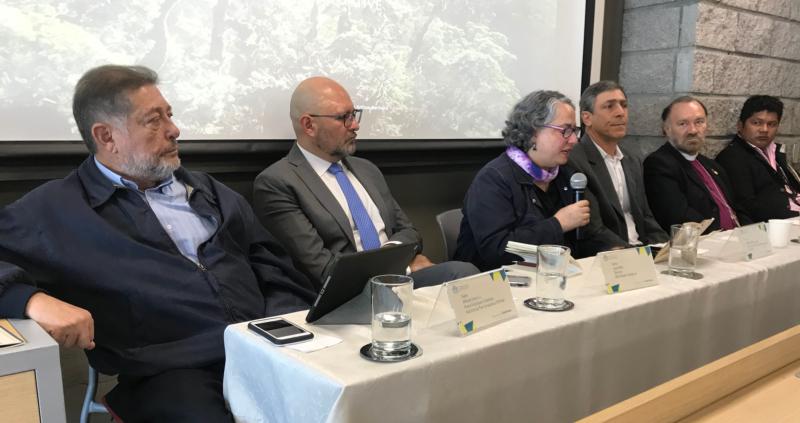 BOGOTA, Colombia (CNS) — Religious leaders in Colombia promised to step up efforts to prevent the destruction of rainforests in the South American country, as they launched a coalition known as the Interfaith Rainforest Initiative.

After meeting with scientists and indigenous leaders at the Jesuit-run Pontifical Xaveriana University, the group of more than a dozen faith leaders called on Colombia’s government to uphold the land rights of indigenous people who are living in the country’s jungles.

The group, which included Catholic, Anglican, Buddhist and evangelical leaders, also said it would work closely with indigenous people to build up their capacity to defend forests from “irrational” oil and mining projects. Leaders said they would be advocates for environmental consciousness.

“We need to add a moral, ethical and spiritual dimension to the defense of tropical rainforests,” the group said in a statement. “And we need to spread that message among members of our religions and spiritual groups.”

The interfaith meeting was convened by the U.N. Environment Programme. The international organization is planning to set up similar coalitions of religious leaders in Brazil, Peru, Indonesia and Congo. Those four countries, along with Colombia, hold 70 percent of the world’s rainforests.

“We are losing topical forests at a speed that has no precedent,” said Juan Bello, Colombia director for U.N. Environment. “We need new kinds of leaders who complement the work that governments and NGOs are already doing to prevent deforestation.”

Scientists believe that tropical forests, like the Amazon rainforest, are crucial to slowing down climate change, due to their massive concentration of plants and trees, but these ecosystems are increasingly threatened by mining, illegal logging, oil drilling and agriculture.

A recent study conducted by the University of Maryland found that, in 2017, the world lost 39 million acres of tropical tree cover, or an area the size of New York state. The study said it was the second-worst year on record.

In Colombia, the deforestation rate has risen as cattle ranchers, gold miners, drug producers and illegal loggers move into areas formerly occupied by the Revolutionary Armed Forces of Colombia, a guerrilla group that made peace with the Colombian government two years ago.

Religious leaders in Bogota are still trying to define concrete steps that they can take to prevent deforestation. One proposal is to develop educational materials and hold workshops that teach rural communities about the value of preserving rainforests.

Jesuit Father Alfonso Ferro, a member of the Pan-Amazonian Church Network, said religious communities should support groups that are trying to find political solutions for deforestation.

“We need to find a way to have a political impact,” he said. “If we don’t find a way to influence public policy, we will end up delivering beautiful speeches that might not end up in action.”

Father Ferro lives in Leticia, a small town in the Amazon rainforest. Throughout the region priests are already holding meetings with community leaders to develop proposals for a Synod of Bishops on the Amazon next October in Rome.

“The current economic system pushes us to treat our forests as if they were merchandise,” Father Ferro said. “But forests are sacred. We have to hone in on that message.”