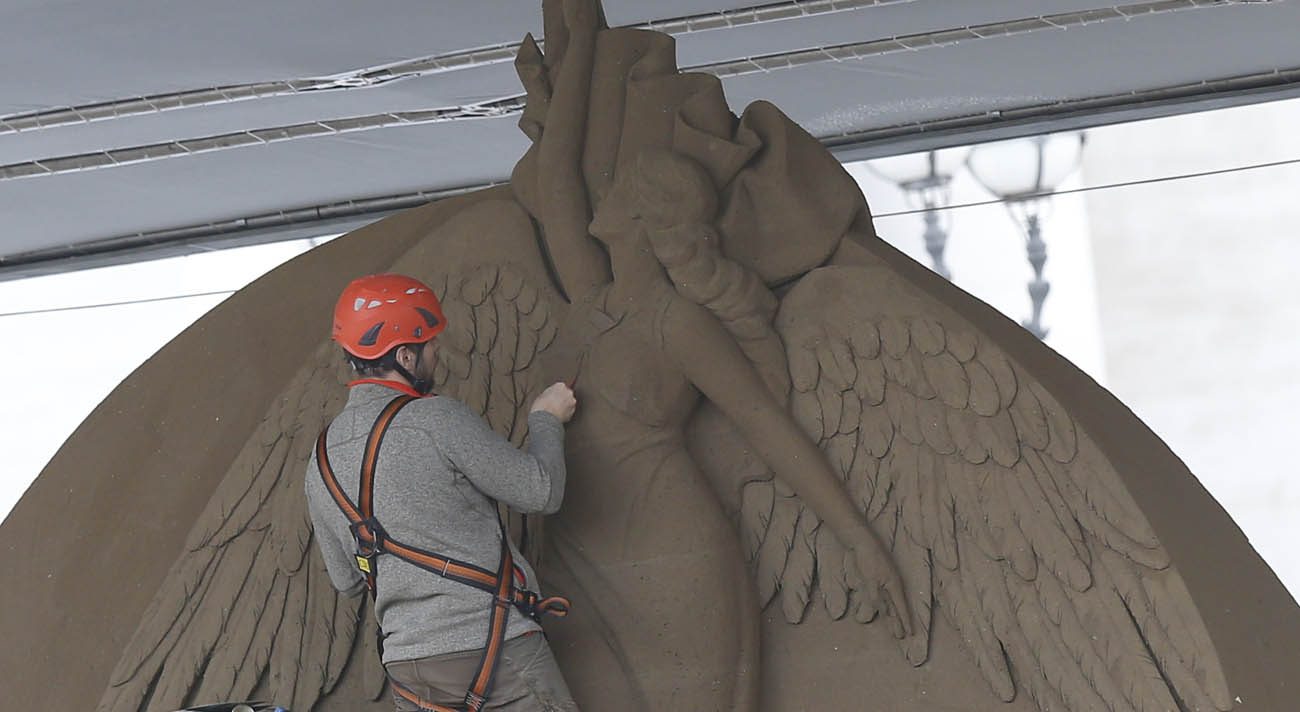 A worker sculpts an angel on a Nativity scene made entirely of sand in St. Peter's Square at the Vatican Nov. 26. The 52-foot wide sculpture is made of sand from Jesolo, an Italian seaside town near Venice. (CNS photo/Paul Haring)

VATICAN CITY (CNS) — From the beach town of New Smyrna, Florida, just a stone’s throw away from Daytona Beach, Rich Varano never imagined his unique talent of sculpting sand would take him to the heart of Christianity.

Varano is the artistic director of the “Sand Nativity,” a massive 52-foot-wide sculpture made of sand imported from Jesolo, an Italian seaside resort town roughly 40 miles north of Venice. It will be the centerpiece of the Vatican’s annual Nativity scene on display in St. Peter’s Square.

“What does it mean for me to be here? I think, quite understandably, it’s the greatest honor there is” and certainly the biggest client he’s ever had, Varano told Catholic News Service Nov. 21.

The American artist and three other sculptors were charged with creating the intricate sculpture, which, along with a 42-foot-tall red spruce tree donated by the Diocese of Concordia-Pordenone in the northern Italian region of Veneto, was to be unveiled at the Vatican’s annual tree lighting ceremony Dec. 7.

Yet, his artistic journey in sand sculpting began many years before his artistry would hit the sands of the Venetian resort town and, subsequently, the cobblestone square in front of St. Peter’s Basilica.

“I’ve been sculpting sand since I was 6 years old,” Varano told CNS. “My father was an amateur and the beach where I grew up had good sand.”

Varano began as an amateur, too, “until I discovered that people would pay for it in my late 20s. And within a year, sand sculpting was the only thing I’ve been doing professionally ever since.”

The process of creating the sculptures, however, is more than just molding and shaping sand. Unlike the sand castles vacationers often see disintegrate from a single touch or the occasional passing wave, sand sculptures are made durable enough to even withstand light rain through a process of compression. 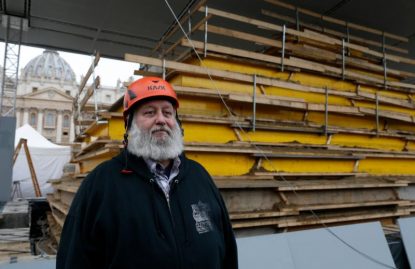 Sand sculptor Rich Varano is pictured as early work progresses on the sand sculpture Nativity scene in St. Peter’s Square at the Vatican Nov. 21. Varano, a native of Florida, is the artistic director of this year’s Nativity scene. (CNS photo/Paul Haring)

The sand, which was delivered from Jesolo to St. Peter’s Square in massive trucks, is mixed with water and compressed into layers of blocks stacked on top of one another.

Varano said that this process allows for the sculpture to last “indefinitely as long as it wants to be left on display.” The “Sand Nativity” scene and tree will remain in St. Peter’s Square until the feast of the Baptism of the Lord Jan. 13.

“It’s like a tiered cake going upward and when you get to the top, you’re finished,” Varano told CNS. “Then it can be sculpted immediately; it’s suitable to carve right away.”

Unlike sculpting harder materials like marble, which artists can work on at any given part, sand sculpting begins from the top. The artists must ensure their artwork is finished before continuing downward.

“You don’t carve something below first because if you try to go above, it affects what’s below. So, it’s a process, like a scanning, from the top down to finish.”

Another important aspect, he added, is the composition of the sand, which needs to hold enough moisture to allow it to be sculpted and subsequently “stay in its shape and dry like a mud pie in the sun.”

“Really, the only difference that separates us as professionals and people that play on the beach doing it is that we understand the basics of why sand sticks or, more importantly, why it doesn’t stick,” Varano explained.

Of the 20 artists he works with creating sand sculptures at the annual Jesolo Sand Festival, Varano selected three of his top sculptors not just for their talent, but also “for their ability to work well together, (which) is kind of critical.”

“This piece is over 700 tons but, with 15 days, it still needs to be done in a way that everyone can work productively and stay out of each other’s way and help each other,” he said. “So, this team is very well versed in that; they’re used to working with each other, not just here in Italy, but around the world. So, it’s a good fit.”

Varano and his team have created sand Nativity scenes for the past 17 years in Jesolo, which allowed them to flesh out different more elaborate pieces that told various stories, such as “a day in the life in Bethlehem” and ending with the “crescendo piece” of Christ’s birth.

However, the sand art piece in St. Peter’s Square will feature the “basic, iconic and traditional scene” complete with “the angel with Jesus, Joseph and Mary and then the three kings on one side, the (shepherd) and the sheep on the other side and, of course, the donkey and the ox.”

Nevertheless, for Varano, the intricate planning and subsequent labor that goes into creating one of the most unique art pieces to feature in St. Peter’s Square is worth the effort.

“A lot of expense goes (into) it to bring joy to people. To be able to do the kind of work that we do that is joyful for us and brings joy to others, it can’t be beat,” Varano told CNS. “And to do it in a place like this, there really aren’t words to convey how special it is.”

NEXT: Religious leaders in Colombia form coalition to defend rainforests