Where there are lies, there can be no love, pope says 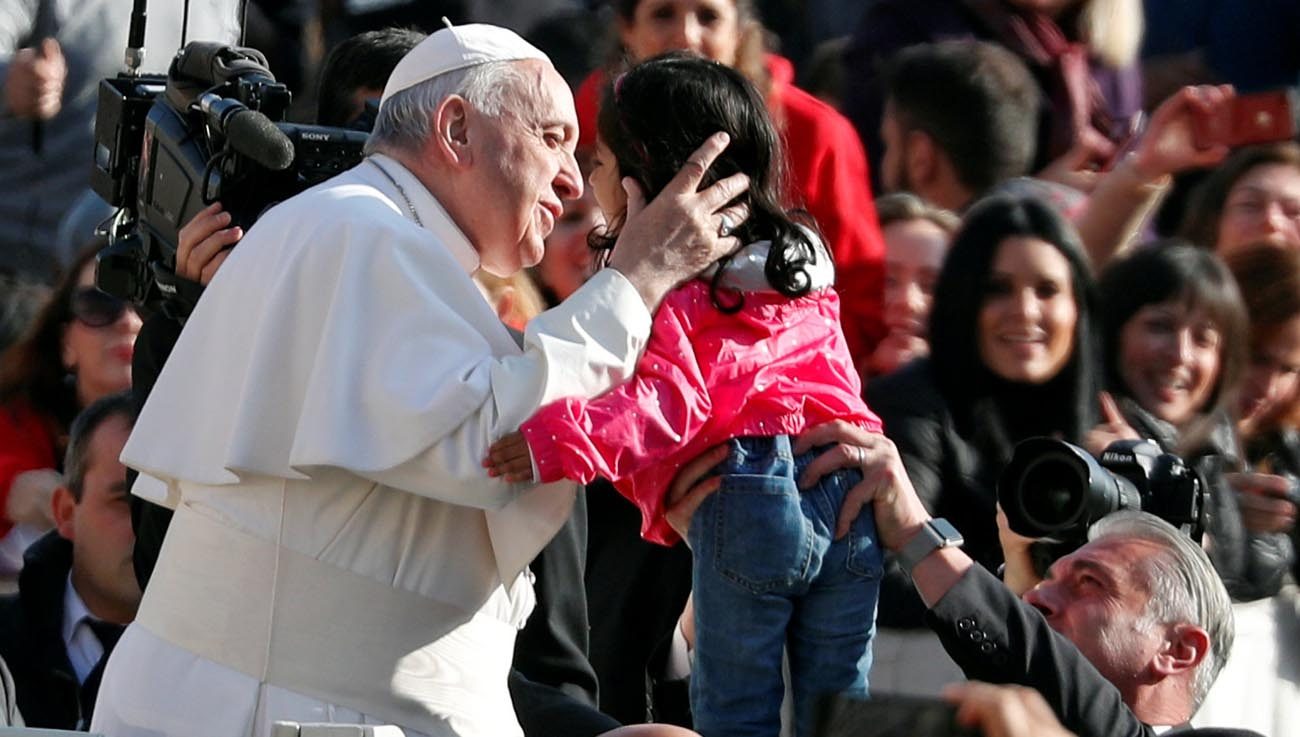 Pope Francis embraces a child as he arrives to lead the weekly general audience in St. Peter's Square at the Vatican Nov. 14. (CNS photo/Max Rossi, Reuters)

VATICAN CITY (CNS) — Lying or being inauthentic is seriously wrong because it hinders or harms human relationships, Pope Francis said.

“Where there are lies, there is no love, one cannot have love,” he said Nov. 14 during his weekly general audience in St. Peter’s Square.

To live a life “of inauthentic communication is serious because it obstructs relationships and, therefore, it obstructs love,” he said.

The pope continued his series of talks on the Ten Commandments, focusing on the command, “You shall not bear false witness against your neighbor,” which, according to the Catechism of the Catholic Church, forbids misrepresenting the truth.

“We are always communicating,” whether with words, gestures, one’s behavior and even by being silent or absent, the pope said. People communicate by who they are and what they do as well as by what they say, which means people are always at a crossroads, “perched” between telling the truth or lies.

“But what does the truth mean?” he asked.

Sometimes, he said, people think that revealing other people’s personal business and confidential information is fine also because, “I only told the truth.”

Gossip, however, destroys communion by being indiscreet and inconsiderate, the pope said.

The tongue is like a knife, he said, and “gossip kills,” destroying people and their reputation.

The ultimate model of truth is Jesus, who came into the world “to testify to the truth.” As he told Pontius Pilate, “Everyone who belongs to the truth listens to my voice,” according to the Gospel of John (18:37).

To follow Jesus is to live “in the Spirit of truth” and bear witness to God’s truth, merciful love and fidelity, he said.

“Every person affirms or negates this truth with their every act — from minor everyday situations to more serious choices,” the pope said, so people need to ask themselves whether they are upright and truthful in their words and deeds, “or am I more or less a liar disguised as truth?”

“Christians are not exceptional men and women. But they are children of the heavenly Father, who is good, who does not disappoint and who puts in our heart the love for our brothers and sisters,” he said.

“This truth is not spoken so much with a speech. It is a way of being, a way of living and you see it in every single deed,” he said.

“To not bear false witness means to live like children of God who never ever refutes” or contradicts himself, and never tells lies, he said.

It is living in a way that every deed reveals “the great truth that God is the Father and that you can trust in him,” he said. God “loves me, he loves us and (from that) springs my truth, to be truthful and not deceitful.”

NEXT: Jesuit superior says Father Arrupe’s sainthood cause may open in February